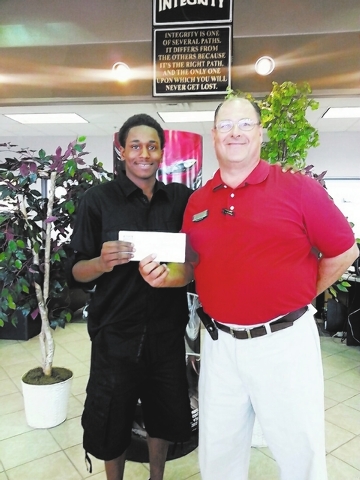 The first winner of “Kick for Cash” in a long time kicked the ball through the uprights last Friday at the Trojans/Chaparral game and won $500. The winner was junior OJ Ringo of Pahrump Valley High School.

Trojans announcer Mike Colucci is the MC for the fundraiser and was very excited for the young man. Colucci who has been the MC since it started has been instrumental in keeping the fundraiser going with the sponsor, Saitta Trudeau Chrysler Jeep and Dodge.

“It’s been at least three years since anyone has won this event. This meant Saitta Trudeau was writing a $500 check plus money for the ticket sales,” he said.

Colucci says the concept is pretty simple. The football is placed at the 35-yard line and you get one kick to make a field goal. If it goes through, you make $500. Tickets are sold by a designated PVHS sports teams. They are $1 tickets and all the money made goes to the athletic department. Saitta Trudeau puts up the prize money and even matches the ticket money sold, so if they sell $200 in tickets, the car dealership will donate $200 to the Trojans on top of the prize money.

Saitta Trudeau has a long history of helping the high school. This fundraiser has been sponsored by them since 2002 when Tom Saitta and Don Trudeau first purchased the dealership.

The raffle tickets are sold at every home football game. This year there will be four more chances to Kick for Cash.

“All the money collected benefits the athletic department and sometimes I have seen as much as $800 in tickets sold during a night,” Colucci said.

The team plays this Saturday at 7 p.m. against Desert Pines and again someone will be kicking for cash during halftime.