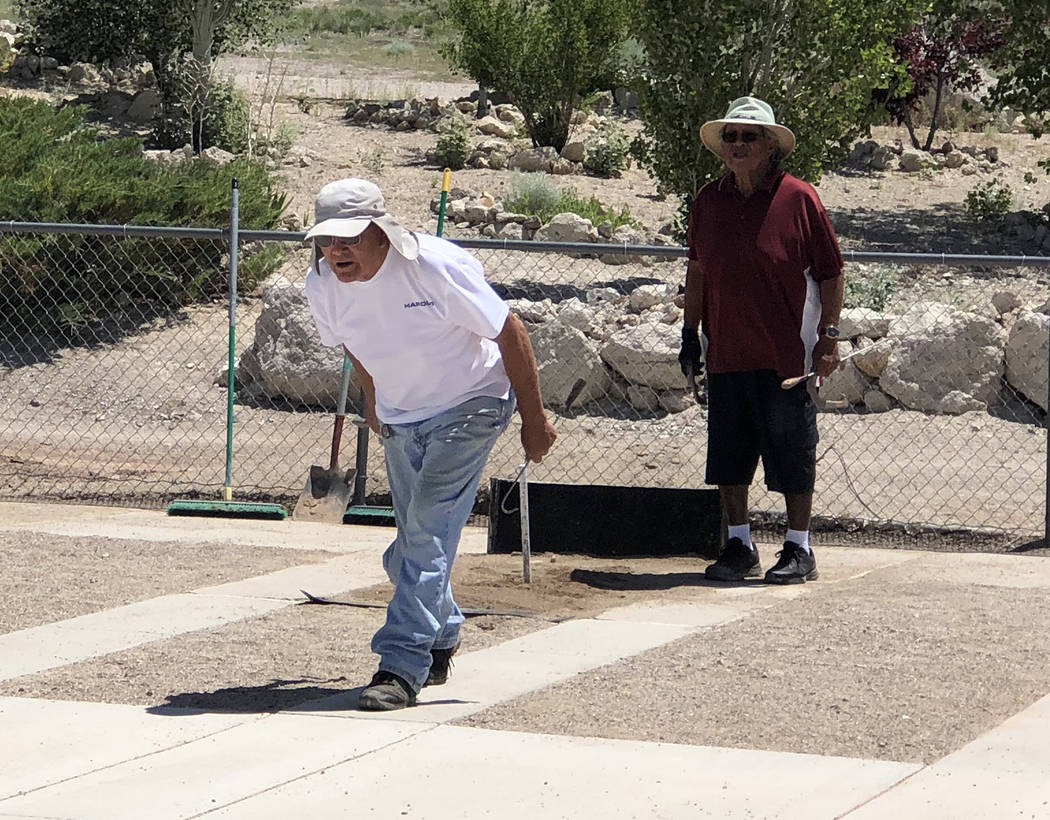 Tom Rysinski/Pahrump Valley Times Harold Holbrook of Carson City pitches as Ken Jose of Tonopah looks on during the Ho-Z Classic on Saturday in Tonopah. Holbrook, 79, went undefeated in the A Division to claim the tournament championship. 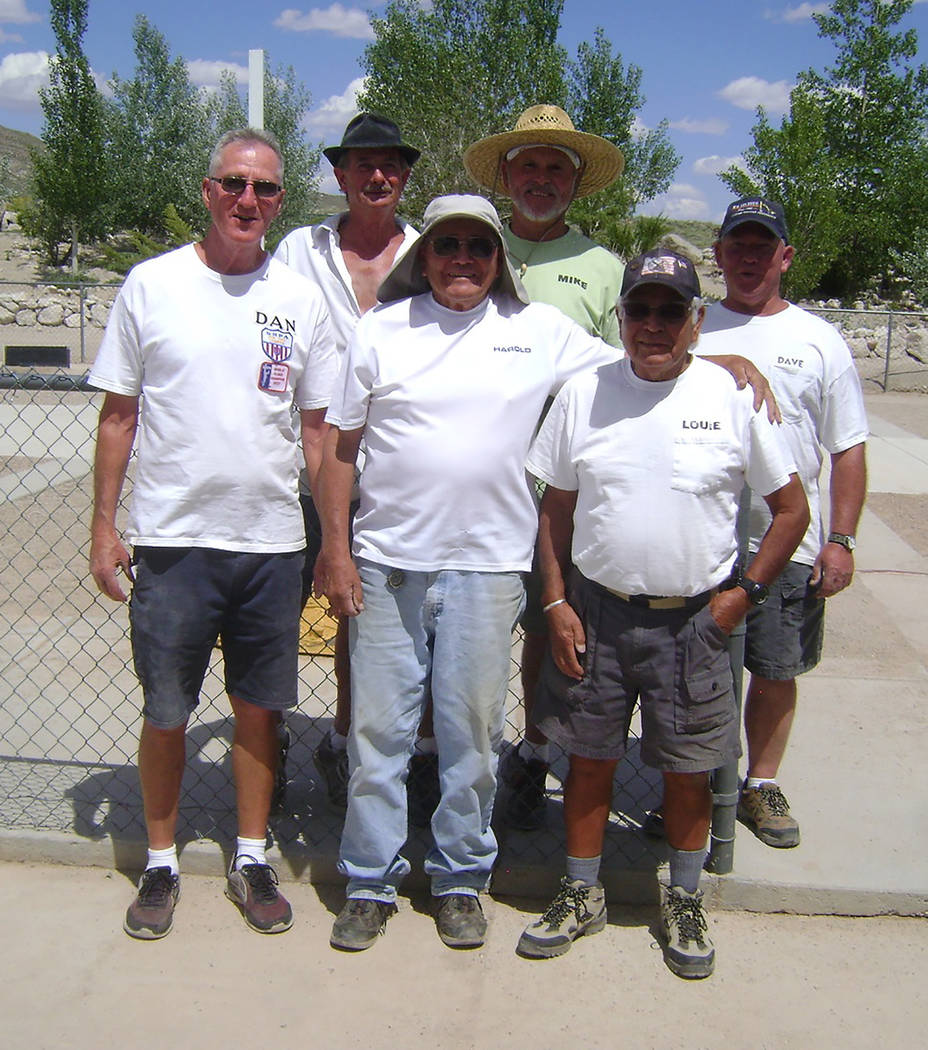 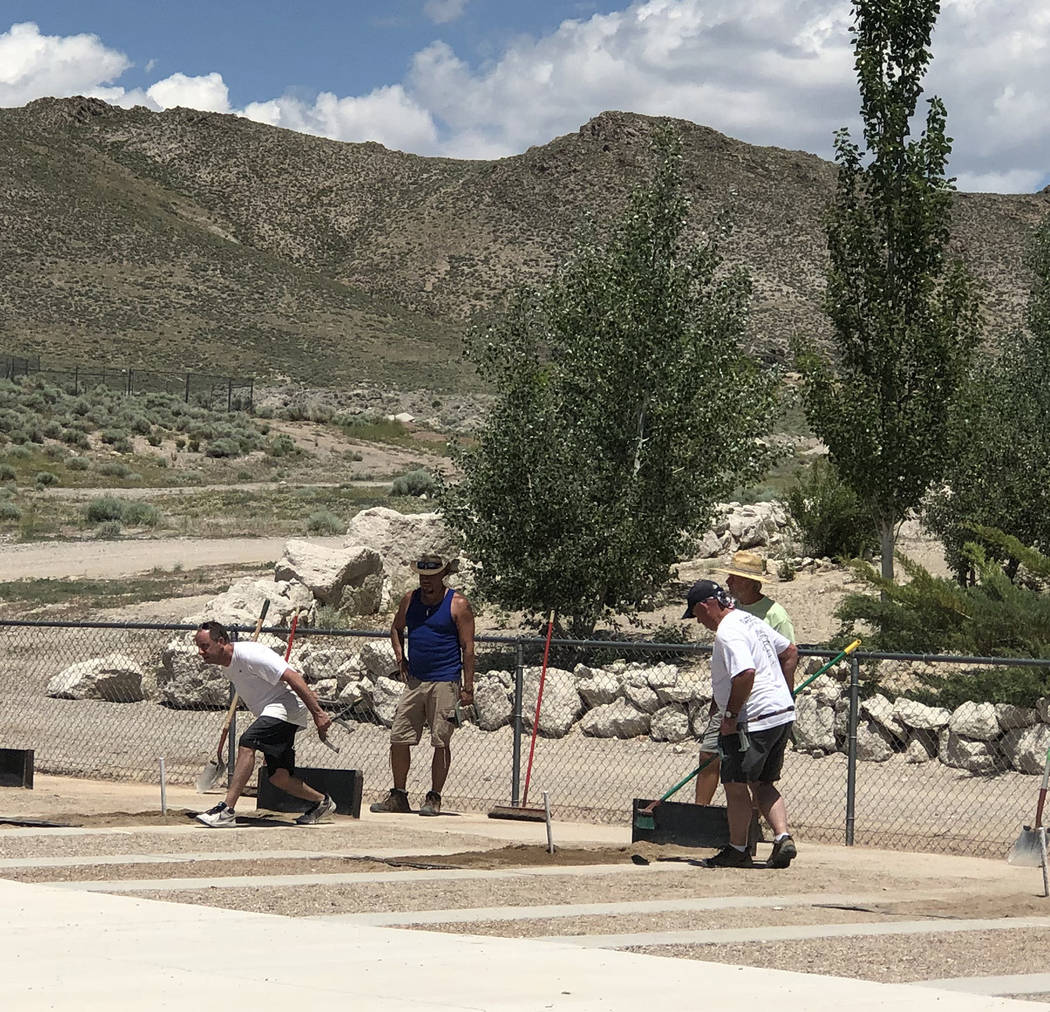 Tom Rysinski/Pahrump Valley Times Competitors in the B Division finish their final games during the Ho-Z Classic horseshoes tournament Saturday at the Joe Friel Sports Complex in Tonopah. 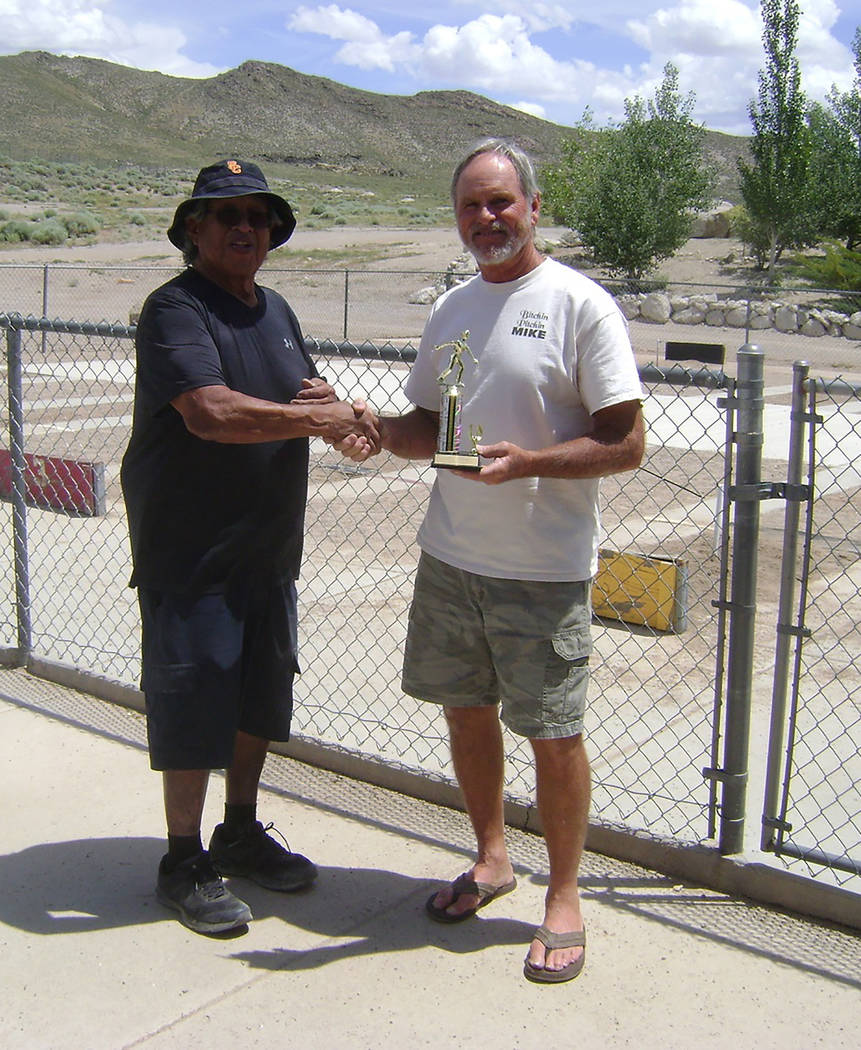 Although eight of the 13 competitors Saturday at the Ho-Z Classic were from Pahrump, it was an elder statesman from Carson City who stole the show at the Joe Friel Sports Complex in Tonopah.

Harold Holbrook, who has won the elder division at the state championships for several years, defeated Louie Escalante 35-27 in the final game of the day to win the A Division and claim the tournament championship.

Holbrook and Escalante were each 4-0 heading into that last game, although Holbrook had a tough time with tournament host Ken Jose. Jose had a 38-19 lead midway through his game against Holbrook but went cold the rest of the way, allowing Holbrook to squeeze out a 45-42 win in Round 4.

“It’s a tough group,” Jose said. “You’ve got to a throw a ringer against these guys almost every time.”

Holbrook has hit ringers on at least 50 percent of his shoes in nine out of 10 tournaments since June 2018. “I’ve never seen him lose,” said Mike Norton of Pahrump, the secretary-treasurer of the state horseshoes association.

“I started pitching horseshoes when I was 45, and I’m 79 right now,” said Holbrook, who said he tries to get to at least five or six events each year.

The highlight of the Holbrook-Escalante battle came near the end, when each competitor threw two ringers on three consecutive turns, known as “four-dead” because, with all four shoes ringers, no points are awarded. Points are earned when one player pitches better than the other on a given turn.

“Once in a while it happens,” Holbrook said. “If you’re just relaxed throwing the shoe. It’s mechanics. You don’t have to win. Do the mechanics. Once you start to do that right, then you win.”

When a pitcher calls out four dead as the result of a turn, Pahrump pitchers will repeat the phrase, marking the significance of something that doesn’t happen too often.

“No, not here,” Norton said. “In world tournaments you see a lot of it. In our little backyard tournaments, it’s pretty rare.”

But Holbrook, who said he doesn’t keep track of how many state titles he has won, is perfectly happy pitching in “little backyard tournaments.”

“I think it’s the camaraderie among the pitchers,” he said. “You always run into one or two you don’t want to see no more, but 99 percent of the time you like to see these people again and again and again.”

In the B Division, Pahrump’s Mike Nicosia was declared the champion using the most-points tiebreaker. Nicosia, Randy Salzwimmer and Dave Barefield each went 4-2 in the round robin competition, but Nicosia compiled 196 points to 194 for Salzwimmer to take the tiebreaker. Barefield, who had the most ringers in the B Division with 62, was third with 181 points.

Dan Dunn, the only pitcher in A Division to exceed his entry ringer percentage, finished third after going 3-2, losing only to Holbrook and Escalante.

The next event on the Nevada pitching schedule is the Hot Vegas Daze Open at 9 a.m. Saturday. The pitchers return to Pahrump on July 6 for the Saddle West Open.