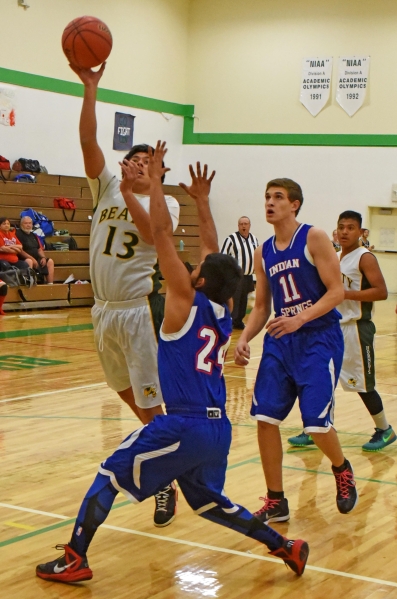 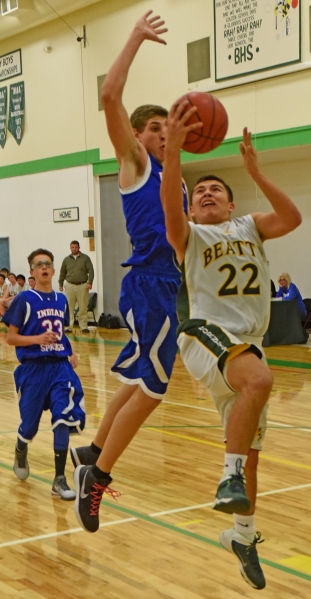 Beatty boys basketball won their home opener. The team triumphed over Indian Springs 50-29 on Tuesday in a non-league game.

Hornets coach Steve Sullivan said his team started off slow, but he was happy with the performance.

“That was okay because we were getting some of the boys experience and we were sticking to the game plan,” Sullivan said. “We had to be patient to finally get in a rhythm and as the game progressed the boys did just that.”

He added, “We struggled to attack the boards offensively by getting in position against their bigs. However, overall I am very happy with how the boys played as a team.”

According to Sullivan, three of the Thunderbirds towered over his team’s tallest guy. Height can be an intimidating factor and the coach feels there is only one way to beat a taller team.

“We are a small team with only a couple of players barely over six feet,” the coach said.

“The only way you can overcome a height disadvantage is to gain an attitude advantage. For the most part, the boys did not back down and attacked Indian Springs on both ends of the court.”

Sullivan said the key to the win over Indian Springs was defense. Beatty had 21 steals and 21 defensive rebounds during the game.

“Our focus has been defense and it showed in the steals and defensive rebounds,” he said.

Despite being happy with the defense, the coach still sees some room for improvement.

“Our primary focus is going to be defense and all that comes with it,” Sullivan said. “There is still a lot we need to do better defensively. We are still not quick enough during defensive transitions and we struggle to anticipate the pass by getting in the deny position.”

The team travels to the Beaver Dam tourney, which is on Friday and Saturday.