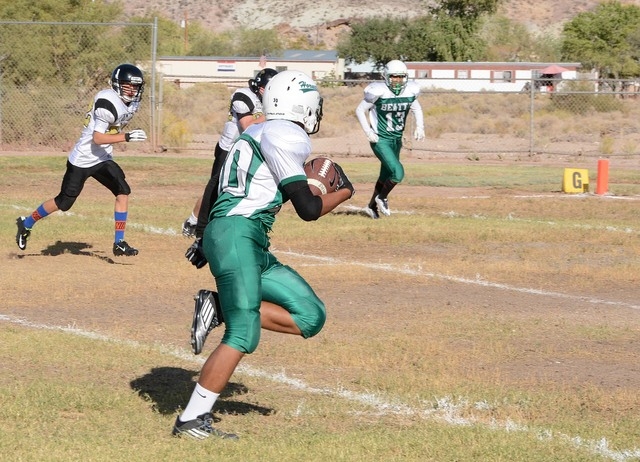 The Hornets are having a decent season under new coach James Robertson. Beatty (4-2 overall, 2-2 Division IV Southern) is coming off a big win against the Knights (4-2, 2-2) last week, beating them 46-14.

The Hornets had 215 yards on the ground and passed for 165 yards and with that win are looking to possibly make the playoffs this year.

Senior quarterback Luis Flores was 11-16 for 165 yards and threw for two touchdowns. Flores also ran for two touchdowns and had 50-yards rushing for the evening. Also making big yards in the win for Beatty, was sophomore Jhonpaul Adujar, who rushed for 138 yards and a touchdown on 16 carries.

Hornets Coach James Robertson thought his offense was pretty balanced against the Knights.

“We had over 200 yards in rushing and we passed well. We had some big passes that broke their backs,” Robertson said.

“I think these two plays in the first half broke their backs,” Robertson said.

Defensively the Hornets were also at the top of their game. Beatty had four interceptions, which stopped key drives.

“We shut their pass offense down. They had a couple of good run plays for touchdowns due to missed tackles and mistakes, but we can’t always be perfect,” Robertson said.

Beatty has three games remaining, Tonopah, Indian Springs (0-5, 0-3) and Sandy Valley (6-0, 4-0). For the moment, the Hornets are hanging on to that fourth playoff spot, but Robertson knows he has to keep winning because the Hornets’ last game is against second place Sandy Valley, a team that has been putting up some series points.

Robertson said all his efforts are focused on Tonopah (2-4, 0-4). “I know they can pass. That’s how they almost beat Round Mountain two weeks ago,” Robertson said

In that game, Tonopah came up short 60-53. Last week the Golden Eagles (4-2, 3-1) clobbered the Muckers 78-0. So the Muckers are looking to be spoilers this week and also looking to salvage their season with a much-needed win against the Hornets.

Tonopah averages 193.3-yards passing per game and 253-yards rushing per game for a pretty balanced attack. Their quarterback, senior Connor Friel, is experienced and can hurt defenses if given time to pass.

The Hornets to win need to stop Connor Friel and his passing game. Friel has 72 completions for 1,066 yards and 11 touchdown passes.

Last year, Beatty lost to the Muckers at home 38-16 and are looking for some payback. This is not the same Beatty team from last year. They have multiple threats and speed. The Hornets don’t expect to beat teams on the line but they expect to outrun their opponents and beat them to the gaps. Last year, when they played Tonopah they had 6-7 freshmen starting on the team and now those players have more experience.

Look for Beatty to come out strong with a passing game of their own. Tonopah has lost four straight in a row and this could be number five if they don’t shore up the defense against the Hornets. Tonopah has given up 256 points in their last four games.

The Muckers are hungry and are looking for their first league win. This makes them dangerous to the Hornets. Muckers Coach Duffy Otteson knows his season is not over yet and wants his team to spoil the Beatty playoff chances with a home victory.

“This season so far has been a hard one on all of us … As the season has gone on we have been battling injuries and also been battling ourselves mentally. We look to continue to work hard in practice and win football games,” Otteson said.