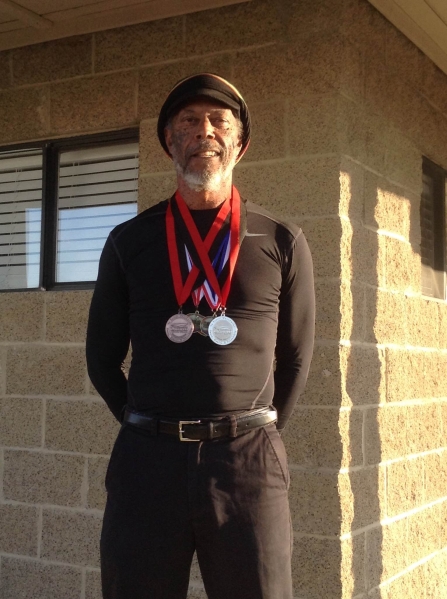 Pahrump Senior sprinter Marvin Caperton closed out his running season with four medals. He ran in the senior games in Las Vegas and captured two gold medals in the 100-meter dash and the 50-meter dash on Oct. 3.

His other two medals were from the Huntsman World Senior Games in St. George, Utah on Oct. 6, where he won a silver in the 100-meter dash and a bronze in the 50-meter dash.

Caperton has been hooked on running as a senior since he turned 50. In college he played football for UCLA and ran track.

The senior sprinter has been to at least five different states chasing after gold. He says he enjoys the competition at the level he is at, and loves the people he meets at the different events.

He encourages seniors to sign up for the Nevada Senior Games in Las Vegas, which are at the end of September and the beginning of October annually.

“It’s really easy to do,” he said. “You just go online and fill out the registration forms. Once that is done, they tell you where to go. They give you the time and place well in advance. Vegas is well organized.”

The only thing he didn’t like about the games is the track and field events are held at UNLV and they don’t give people a place to change.

“They even use porta-potties for bathrooms,” Caperton said. “You have to come ready to go.”

He also said the facilities for track and field are older at UNLV.

“I go to the Huntsman every year in St. George and the track and field events are at a high school that had better facilities than UNLV,” Caperton said. “They even open up the locker room for you to change in.”

He said the nationals in St. Paul, Minnesota were well organized too.

“At the nationals the venues were really nice too,” he said.

As an experienced “senior games participant”, Caperton said he is given more than enough time to prepare flights and hotel arrangements for the National Senior Games, which are held every two years in a different city.

“The great thing about this is the people you meet from different parts of the country,” he said. “I went to Chicago and since I am a member of a running club, other members of the same club picked me up and showed me around town. The people I have met are friendly and really eager to help you out and share things with you.”

Caperton does this every year and says the best thing about the events is the quality of the competition.

“If you don’t prepare yourself by training you will get embarrassed,” he said. “I get to run against world-class athletes in my age group (60-65),” Caperton said. “At the Huntsman you always run into guys from the Caribbean. The competition just makes me want to do better each time. It makes me strive to be better.”

He said he is constantly thinking of ways to get better and talking to other people online around the country.

“I like talking about the sport with different people. I definitely don’t do this because I like to work out in the heat and be all sweaty,” he said. “I am blessed that I am healthy, I set my goals and just keep doing it even if it hurts and I won’t miss my workouts.”