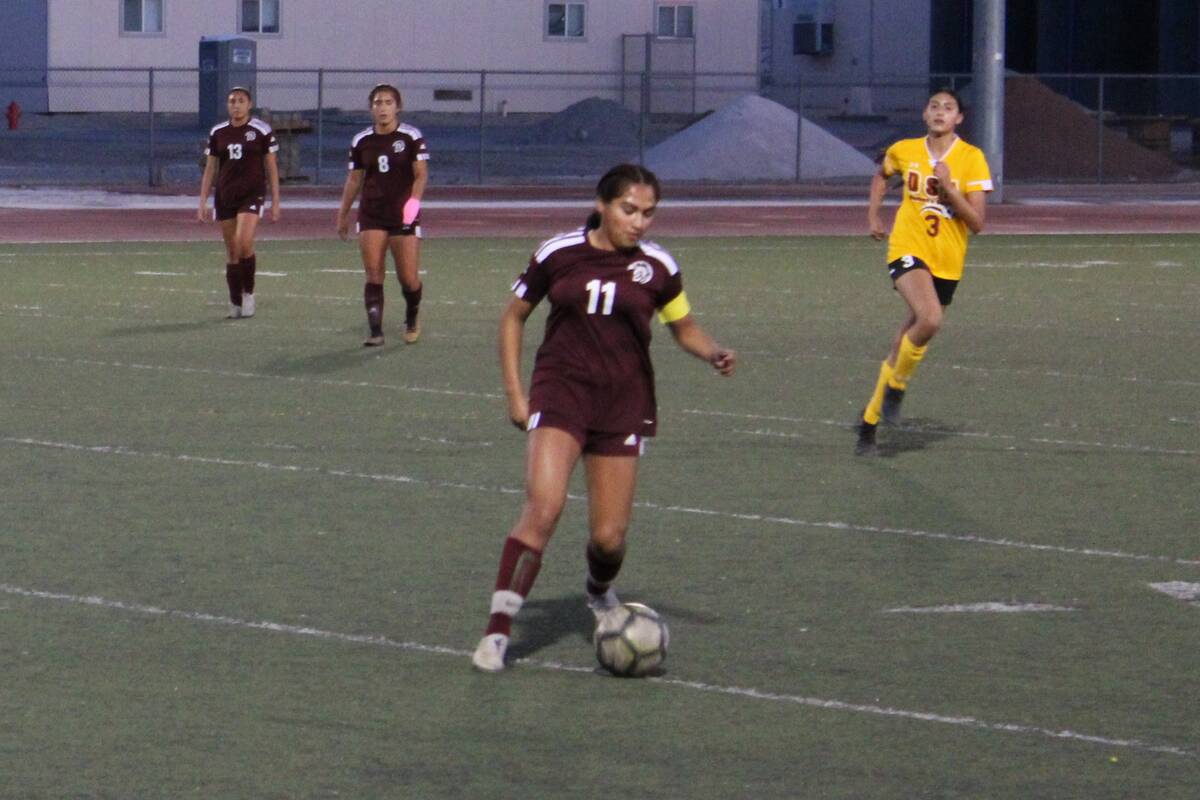 She wears No. 11 on her varsity soccer team. She’ll be seen wearing a captain’s armband during games and she can be heard giving out instructions on the field. Her name is Kiara Ramos.

Ramos, who is a senior at Pahrump Valley High School, plays all over the field during games, but you can mostly find her in the midfielder position. Kiara started playing soccer in second grade after she saw her older sister start playing the year prior.

“My sister started playing, I think around third grade,” Ramos said. “She just got one of those papers from school that said AYSO is starting up. Starting second grade is when I got one and I just wanted to play because I saw her playing and it looked fun, so I just went for it.”

It was love at first kick for Kiara.

AYSO is a youth soccer organization that was started in 1964 in Southern California and can be found all over the country today.

Before she and her sister started playing, the Ramos girls didn’t have any previous influences. Neither of their parents or older family members played soccer. This was a new sport for them.

Being a midfielder wasn’t the position KIara originally played when she was first introduced to soccer.

“My first team I ever played on, I was keeper,” Ramos said of her original position. “The coach just put me there, but I didn’t mind being there. I liked it at the time. Sometimes I would come up and play defense as well.”

Beginning with fourth grade, Ramos and the rest of her all-star team decided to become the club team called Pahrump United under head coach Shawn Holmes. The team clicked and became successful instantly.

“I think it’s more I like the way they play,” Ramos said of Messi and Neymar’s playing styles. “I’m pretty sure they’re attacking and wings, and I play mostly midfield. But I just like watching them play ‘cause it does, like, help me realize how other teams could possibly play, too, and carry the ball. Just watch out for those moves that they might try on me too and just be ready for anything that comes on the field.”

Something that was once so new to her is now where Kiara feels the most comfortable on the field.

“At first, I was like, ‘Oh, I don’t know if I’m going to be able to do it,’” Ramos said of her new position. “I actually did really good. I’d say the first few games I was nervous, but then after a little bit it just came to me. I just got more comfortable with it throughout the years. I say I feel most comfortable in midfield.”

Ramos described Carrington’s relationship with the team as “being open to having any conversation” and said that Carrington likes to have a connection with her players and not make things just about soccer all the time.

In a soccer story that was great up to this point, it wouldn’t be complete without Ramos facing some adversity in the sport. Then came 2020 and COVID-19.

Due to the pandemic, the fall 2020 soccer season was canceled, causing Ramos to lose out on her full junior season. Instead, a shortened, non-league playing season was put together for the spring of 2021. Unfortunately, due to injuries, Kiara was only able to participate in five of the team’s nine spring season games.

Even without a full junior season, and amid a pandemic, Ramos and the Pahrump Valley Trojans have come out this year on fire and have made every minute count.

To this point, they have amassed a season record of 13-1, with their only loss being against Faith Lutheran High School, a 5A school in Las Vegas.

On top of being undefeated against every 3A school that they have played, the Trojans got word that the Nevada 3A Girls Soccer state tournament is going to be held at their high school on Nov. 12-13.

“We were just in shock. This is basically meant to be for us. We have to make it. This is the perfect calling for us to win state this year,” Kiara said.

The Trojans’ playoff run begins with the regional quarterfinals game on Tuesday, Nov. 2, at Bettye Wilson Park in Las Vegas.

After the soccer season is over, Ramos will be focusing her efforts on finishing out the school year and going to college next year. She’s hoping to get some more offers so that she can continue playing soccer at the next level. Outside of playing soccer, Kiara would like to make a career out of becoming a dentist.