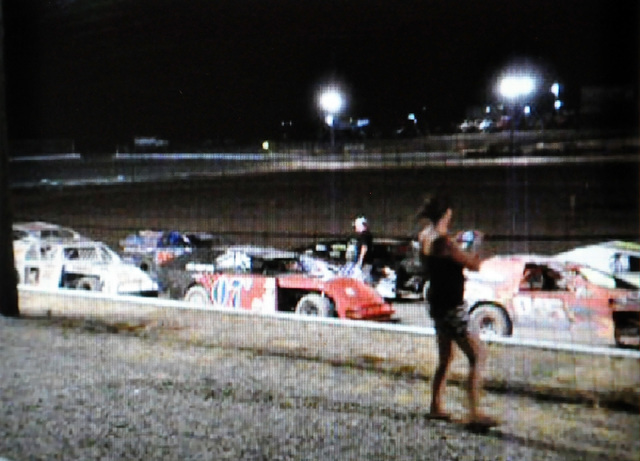 Vern Hee / Pahrump Valley Speedway Speedway flagman, Dale Geissler (white hat) can be seen lining up the 21 Modified cars before the race, which was one of the largest fields in the race's history. Levi Kiefer took an early lead in the race and never gave it up for the win on Saturday night. 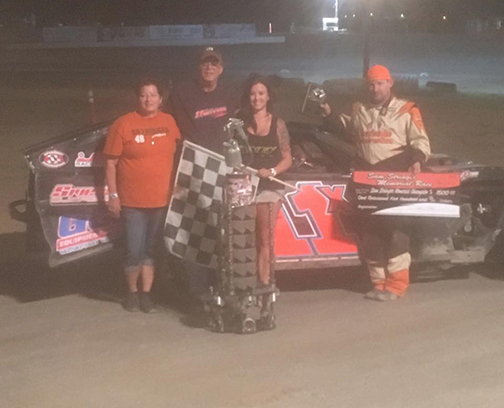 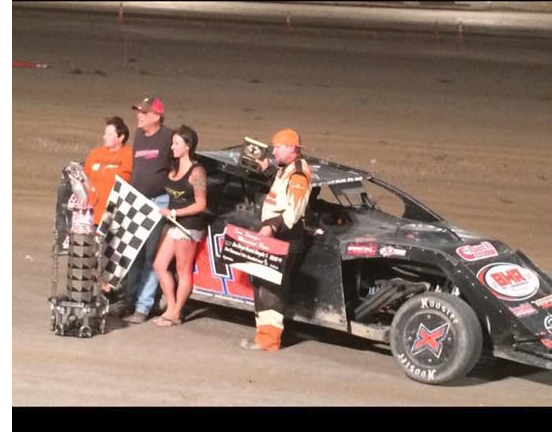 Levi Kiefer led the pack all the way throughout the 48-lap main event at the Pahrump Valley Speedway as he took his third Sam Stringer Memorial race on Saturday.

The speedway main event saw the biggest field in recent history of 21 Modified drivers and packed house in the stands. Local racing fans were not disappointed, as there was plenty of action all night long to keep the fans in their seats, despite an hour delay before the start and the 1 a.m. late-night finish.

The luck of the draw gave Kiefer the lead pole position at the start of the race, which saw a 20-car field lineup. He had finished third in his heat race, but race officials used a draw to determine pole position.

I jumped out to an early lead and was able to lead all 48 laps, Kiefer said.

He thanked race organizer Sheree Stringer for a great event and then said he would be back next year.

I hope to be back next year to get my name engraved on the trophy for a fourth time, he said.

Kiefer won the race twice in his Super Stock in the first two years of the race. This was his first time winning it in a Modified car. He and Kyle Heckman are the only two racers on the trophy.

What started off as a wet track that was too slippery for most of the Mini Stock racers at about 9 p.m. ended up as a dry and dusty track when the main event started close to midnight. The dry conditions led to low visibility for the drivers.

It was bad, there was not enough moisture on the track, two-time Pahrump Valley Speedway champion Clifton King said. Throughout the race we just hoped there was no one in front.

We couldnt see nothing, he said. You just had to tough it out.

In the beginning of the race, the twenty cars on the track made the dust so thick that fans couldnt see the other side of the track from the stands.

King said the low visibility may have caused a five-car spin-out late in the race that he was involved in.

One person spun in front of us and then others spun out, the racer said. I came around the track and I clipped the front of Bryan Wulfensteins car and then spun out. I think this was due to the dry conditions of the track and not the visibility.

King said he finished tenth due to the spin-out and had a hard time fighting the 20-car field from his position.

I was fighting from the back and I was trying to go up and the bad track conditions and visibility was not helping, he said.

Steve Stringer said last year, that both brothers want to honor their father by winning the race.

Josh Stringer said he worked hard on his car for the race.

I made suspension changes to it so it should be better, he said. I have beaten my brother Steve before at this race. One time I got third. Thats when the race was a Super Stock race. I think he has the better Modified car.

He thinks he and his brother can get on that trophy.

We have enough experience to win the race, but we just dont drive enough during the season, Josh Stringer said. I just keep a level head and if I win, its cool. Its all for a good cause, its for a scholarship fund.

But for the Stringer boys, its not winning that keeps the boys on the track. According to Steve Stringer, off the track all the drivers are like good friends and family. He said these drivers are always willing to help each other out. Prior to the race all the drivers found out that a crew member of longtime Pahrump racer, Dan Fitzgerald, had cancer. In fact, Fitzgerald was supposed to race but couldnt be there because his friend and crew member has cancer and he wanted to be with him.

Steve Stringer said a helmet was passed around and they raised over $200 and by the time the race ended he said the number had risen to over $600 because Sheree Stringer and the racers donated winnings.

The Stringer Foundation had raised enough money from the race and the scholarship was covered so extra money was donated to the mans family, Steve Stringer said.