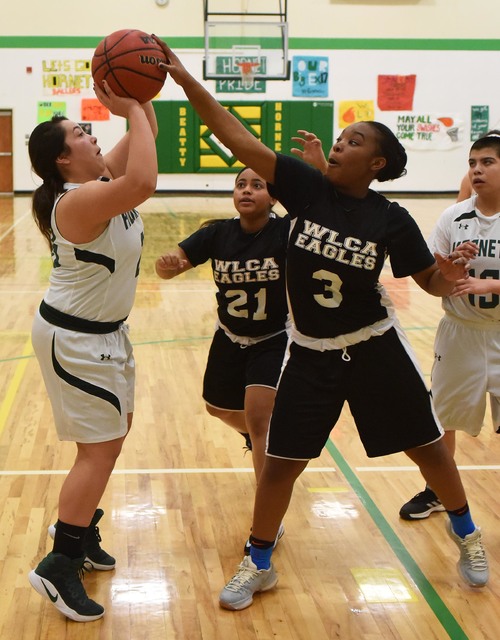 Ariana Oseguera getting blocked during the quarterfinal playoff game against Word of Life on Wednesday. The Hornets travel to Sunrise Mountain High on Friday to play Round Mountain in a semifinal game at 3 p.m. Richard Stephens / Pahrump Valley Times 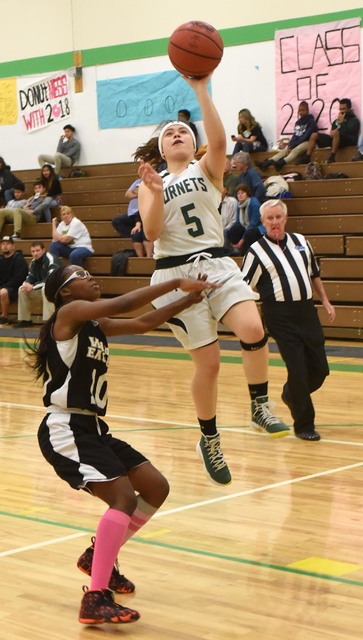 Lexi Gil was in playoff mode as she scored a personal high of 28 points against Word of Life on Wednesday at home. The Hornets defeated the Eagles, 65-28. Richard Stephens / Pahrump Valley Times

“We played a good, fast game,” Hornets coach Aimee Senior said. “We had a lot of steals and scored off the fast breaks. We need to continue this momentum into Friday, and our defense needs to step up, and our offense needs to shoot the ball. If we can keep calm and play our game, we’ll give Round Mountain a good game.”

Gil said her team got a lot of turnovers and capitalized on them.

“We helped each other a lot,” she said. “We would steal the ball and then drive down for the layup and that’s how we scored a lot of our points.”

Round Mountain just played Beatty in their last regular game of the season, beating the Hornets 47-29. The Hornets had a hard time in that game containing the Knights’ lead scorer, Alyssa Hanks, who scored 28 points.

Senior said her team has to stop her to win the upcoming playoff game. Another key to that game would be Gil getting double digits in scoring for the Hornets, along with Granados and Karina Villanueva. Granados also has to have a double-digit game in rebounds. She had 13 in the game against the Eagles.

The Knights held Gil to just four points on Feb. 10.