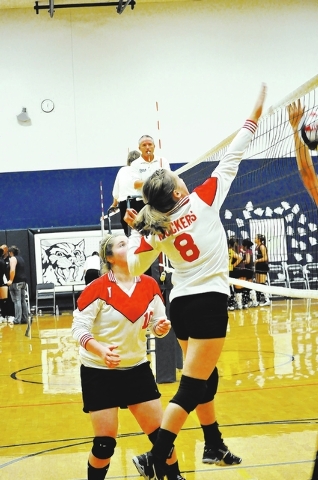 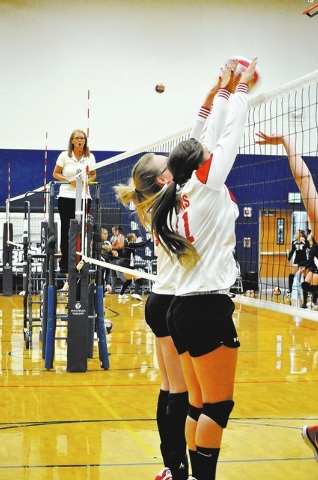 The Lady Muckers volleyball team saw action at a tournament in Ely Friday and Saturday. The team played four games on Friday and three games on Saturday and went 4-3.

Muckers Coach Harvey Gonzalez was pleased with the team results. “We have a lot of work to do still. They did pretty good. They ended up in third or fourth place. We did beat Ely who ended up winning the whole thing,” he said.

Tournaments like this give a coach a good idea of the strengths and the weaknesses of the team.

“The tourney was really good for us. It gave us some good quality game time, so we can see where we need to make some adjustments. There are all these little glitches and bumps. I never want to lose a game, neither do the girls, with that being said these tournaments are for us to learn with, and to get experience,” the coach said.

Gonzalez believes his defense worked really hard at the tourney.

“The defense impressed me the most because my team was flying to the ball and they did not want to let any ball touch the ground. They were covering the holes and their areas and backing one another up,” he said.

The coach said if he had to pick one thing on defense, which needs attention he would pick his team’s blocking.

“We have work to do on the blocking,” he said. “We had some blocks and we had some good touches, but our timing was a little off.”

Offensively the team will be tuning up and working on hitting the ball hard. Gonzalez felt his team did well with serving. He said the servers were consistent during the tourney.

The Muckers go into action again at home Sept. 6 against Lone Pine at 3 p.m. The team then travels to Pahrump this weekend for the Pahrump Valley Invitational.

Last year at Pahrump the team finished in the finals and beat the host team. Tonopah will be hard-pressed to beat the seasoned Trojans who return with a taller bunch this year and more veterans. The Trojans come to the tourney with the hard pounding senior Payton Hart and the strong blocking of Mikayla Davis.

Along with the Trojans, will be Coach Ginger Whipple’s Alamo team. Alamo has the distinction of going to the state finals the last 17 years and winning the title 14 of those years. Whipple said she will return with pretty much the same team she had last year. Again, she says this year has little height. She will return with three players who made the all conference Division 4 team last year, Bailey Hosier, Traci Strong, and Kennedy Huntsman.

Last year the Muckers beat this team under Judi Boni. Boni is gone, but she turned over the reins to Gonzalez who has plenty of coaching experience.

The Pahrump tournament will let the Muckers see most of Division 4 all in one day and they will have a chance to see Division 1 and 1-A schools too. The tourney starts at 8 a.m. and ends at 8 p.m.