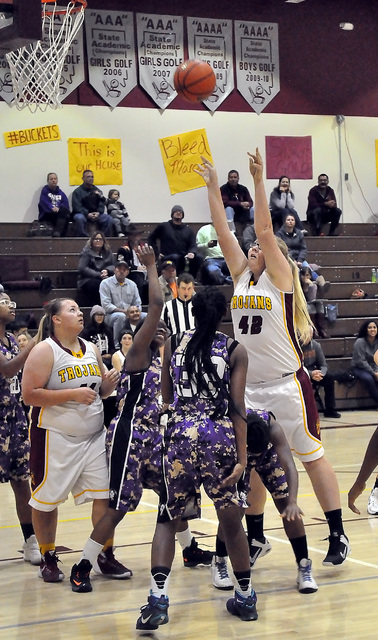 Caeli Havel (42) shot 100 percent on Tuesday night. She is seen making one of her three baskets against Sunrise Mountain in the Trojans 56-18 trouncing of the Miners as Jordan Egan looks on. Horace Langford Jr. / Pahrump Valley Times 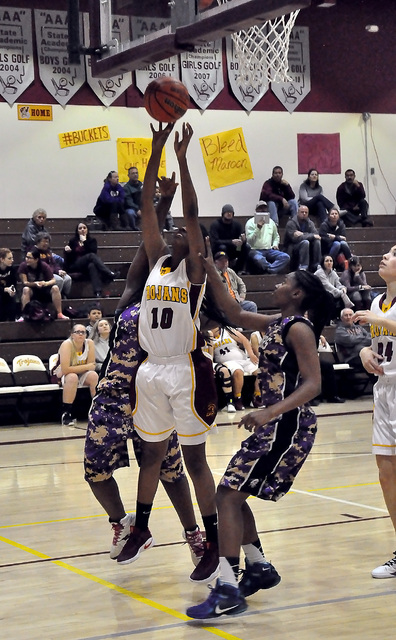 C’mone Wrayball gets some shooting action against Sunrise Mountain as she sinks this basket against the Miners on Tuesday. Almost everyone on the roster scored. Horace Langford Jr. / Pahrump Valley Times 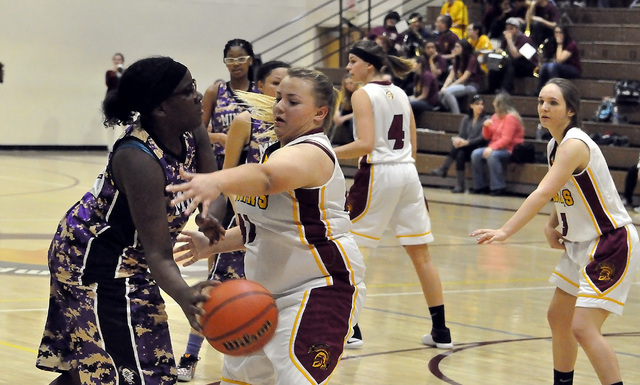 Jordan Egan works on defense to prevent a pass by an opponent on Tuesday. Egan is known for her high energy and intense play. Horace Langford Jr. / Pahrump Valley Times

The Lady Trojans’ dominated Sunrise Mountain with a strong offensive performance for their first conference win of the season, winning 56-18 on Tuesday.

Isabelle Mesa led the girls basketball team in scoring, with 11 points, and both Alyvia Briscoe and Bethany Calvert sank two three-point shots apiece. Almost the entire team came away with a basket.

The Trojans (6-8 overall, 1-0 Sunset League) defense also dominated the game with steals up and down the court, accumulating 23 steals for the night.

“More than likely that’s a season high for us,” Trojans coach Bob Hopkins said. “We are doing some things well, but we are still missing the easy shots. At least in this game, we were able to make some outside shots.”

Hopkins said after the 10-point loss to Virgin Valley, he told his team that they need to handle presses better.

“We handled the press all right against Virgin but then would turn over the ball after scoring and they would score four times,” Hopkins said. “We also need to rebound better.”

He said the scoring has been something they have been working on.

“Shooting is a skill we are always working on,” the coach said. “We are getting better at it.”

One could tell the Trojans have practiced their shooting, even the bench came out shooting hot.

In the fourth quarter, Hopkins put in their tallest post, at 6 foot 1 inches, in the game and they fed her three times in a row for three consecutive baskets.

Hopkins said they have at least two girls that concern him.

“We just saw them at the Virgin Valley tourney and they have good outside shooters that we have to contain,” Hopkins said.

The Trojans coach was confident his team will be able to do that and thinks his team is headed in the right direction.