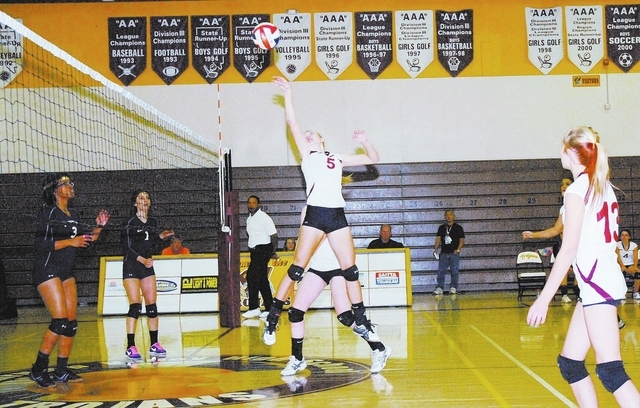 The game against Western was last Thursday and the Trojans had no problems beating them 3-1, but Coach Jill Harris really did not know what to expect with Cheyenne.

After all, the Trojans lost to them 2-1 at the Pahrump Invitational and Cheyenne beat Clark 3-0 earlier in league play, but they lost to Western 3-2. Throw in the fact Pahrump was down two key hitters, Payton Hart and Lauren Koenig and who knew what would happen.

Senior Payton Hart is the leader of the team and drives the team with her strong arm and kills. In her last three league games she is averaging 8 kills per game.

“I knew it would be a different ball game without Payton,” Harris said.

It’s not known when Hart will be back. At the moment she is having problems with a grade in a class. Koenig is out with the flu.

Athletic Administrator Chris Brockman said it is different this year than last year. Last year students had to wait a specific time and now they just have to give proof from the teacher they are passing the class.

Trieb is about 5 feet 8 inches tall and was not afraid to show the varsity team she was ready to hit. She said as the game went on she was less nervous and the players on the team made her feel welcome and they were very helpful. Trieb had 5 kills on the game.

With Hart gone, the team spread the kills around. Alyssa Murphy played in Hart’s spot and had 6 kills, Shayla Dance had 5, Mikala Davis had 2 and Jill Smith had 3.

“They rely on the senior (Hart) and if she is not there you got to play like a big girl. We always knew she (Murphy) had the capability. Her games have improved,” Harris explained.

Murphy showed some real spunk for her size, at 5 feet 5 inches tall she really hit the ball. Murphy was all smiles after the game. “Some things have happened to our other players so I had to step it up. I always wanted to play outside and I got my chance,” she said. “I would hit it and it would shank off and I was pretty excited about that.”

The game was exciting as the Trojans easily dispatched the Desert Shields in the first two matches 25-20 and 25-11. It really seemed like the last match would go the Trojans’ way too. They started off well with a 5-0 lead, but then could not put the game away and midway through Cheyenne took the lead and the win, 25-23.

Cheyenne Coach John Armstrong just said after the game, “My team decides when to show up.” He said it has been that way all year.

Against Cheyenne, a major factor in Trojans play was the back line. Lauren Ashford and Sammy Altiero had great games. Ashford is the team’s libero, which is a defensive position and she only plays the back line.

Ashford had some shaky games to start, but believes she has gotten used to the girls and how they play and now her game is more solid.

“I am working hard in practice and it has paid off. It has taken time to adjust to Pahrump because I have never played with these girls before. We are all coming together as a team,” she said.

Another factor in the game was the refs. At one point in the fourth match the head official actually took off two points. The score read 22-15, but as if by magic the score was suddenly 20-16 to the dismay of Harris.

“The ref said it was because he did not look at the line judge and it was a correctable error,” she said.

The ref in the first two matches had problems with the line judges. Each team provides a line judge. The Cheyenne judge seemed to favor the Cheyenne team and the official had words with the judge, but it’s not known for sure if this was the problem in the fourth match. The official was unavailable for comment.

The Trojans played at Faith Lutheran on Thursday night and it was too late to report. Faith is undefeated and the division leader at 3-0.

Harris was looking forward to the game and was not worried how her team would play without the key players.

“It was fun and exciting to watch and the girls did not quit. The girls are hard workers who don’t quit easily. They are showing a bit more maturity. When we played tougher teams we stepped up. Yes we got beat, but they played better. We are going to be OK,” Harris said.