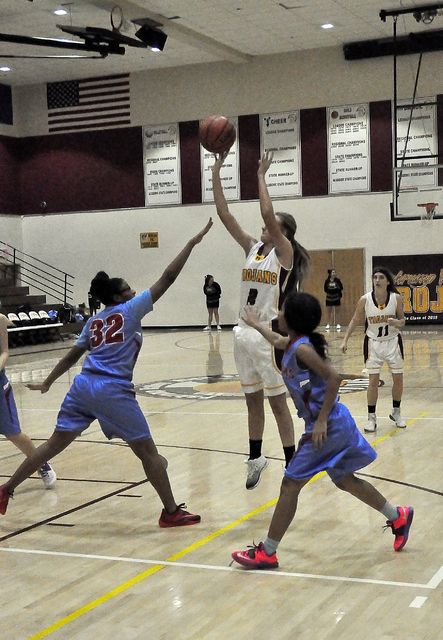 Junior Alyvia Brisco (2) takes a shot against Western when the Trojans lost to them by one point, 29-28 on Jan. 24 at Pahrump. The girls team got their revenge and beat the Warriors on Thursday, 38-32. Horace Langford Jr./Pahrump Valley Times 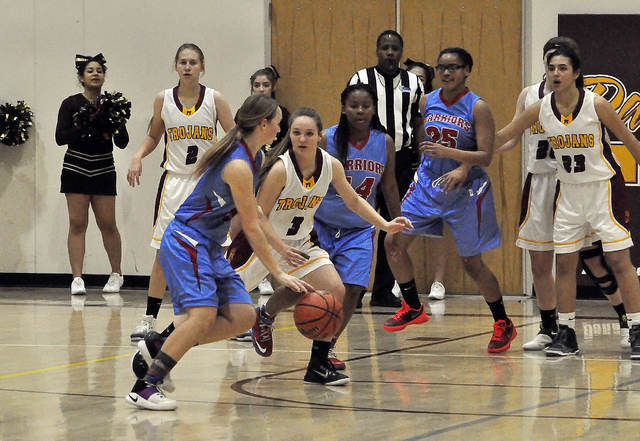 Jackie Stobbe defends against Western on Jan. 24 when Western took the first game of the series from Pahrump at the end of the game. Horace Langford Jr. / Pahrump Valley Times

In basketball, momentum can change at the drop of a hat and only needs a catalyst.

The Lady Trojans found this out in the second quarter of their game at Western on Thursday. Leading 8-2, a faulty game clock almost turned the game around. But the Trojans held on, escaping with the 38-32 road win and with the victory Pahrump (12-13 overall, 5-5 Sunset League) takes the third-place seed in the playoffs.

“We had the momentum going into the second quarter and there was a 15-minute break in the action to find another game clock,” Hopkins said. “We finally played part of the second and third quarters without a clock, but the break gave the Warriors a change in momentum.”

The Warriors (11-11, 5-5) started to make more baskets in the second quarter, matching the Trojans point for point with each team scoring six points. At the half, the Trojans were still hanging on to a six-point lead 14-8, but things continued to get worse for the Trojans and in the third quarter, Western outscored the Trojans 15-13, pulling within two at the end of the third, 25-23.

In the fourth, the slide continued and the Warriors caught the Trojans and actually went ahead. Hopkins said the team was down by one point in the fourth quarter.

The Trojans kept fighting and managed to outscore Western 13-9 and hold on in the fourth.

“What really won the game for us was our free-throw shooting,” Hopkins said. “We were 15-26 and had several players in the fourth quarter that kept us ahead. Jackie Stobbe went 1-2 with a technical, Bethany Calvert made two in a row and then Jill Smith made a basket on an inbound play that put us ahead by six.”

Isabelle Meza led the team with 10 points and Bethany Calvert, Alyvia Briscoe and Jackie Stobbe each had seven.

With the regular season ended, Pahrump turns its focus on Moapa Valley (23-5, 8-2), the second-place seed of the Sunrise League and the Trojans will travel today to Overton to play a 6 p.m. game.

If Pahrump wins, they will play the winner of the Tech vs. Cheyenne game on Friday at Sunrise Mountain High School at 6:20 p.m.

Hopkins said his team struggled with the Pirates’ press but it was their first game of the season and he feels his team has improved since then.

“We know what we are doing and so do they,” he said. “It will be a tough game. We will have to play them harder than we played Cheyenne. I saw them again and they shot a lot of 3-pointers and it wasn’t just a couple of players. They have four to five players that can shoot. They are quicker than us and we’ve got to play good defense.”

The Trojans have totally turned things around with Hopkins returning as head coach after an eight-year break. This year he took the team from the cellar to third place and to the playoffs for the first time since 2008.

The boys basketball team also made some strides despite losing their last game to Western, 71-60. The boys won more games this year (7-20, 1-9) since the 2013-14 season, which was Trojans coach John Toomer’s first season.

Last season was a tough year for the boys basketball program too, with injuries to players. The team barely fielded seven players on the court. There were even rumors that the boys might not have a team this year.

At the boys basketball tryouts, the Trojans had over 50 players try out for basketball, bringing new life to the program. The boys have a good core to build around with potentially five juniors returning, most notably two veteran guards in Antonio Fortin and Bryce Odegard. Things are picking up in basketball.

In addition to some new talent, Toomer also added a new assistant coach in James Taylor. This addition has helped the Trojans play better defense and offense this year.

Of course what Trojans coach John Toomer needs and I am sure it is on his wish list, is a big man like Cheyenne sophomore Christopher Rose, at 6 foot 5 inches and 245 pounds.

Toomer was also happy with the season.

“We both know that this is not the league we belong in as far as basketball is concerned, but it has been a fun growing season,” the coach said.