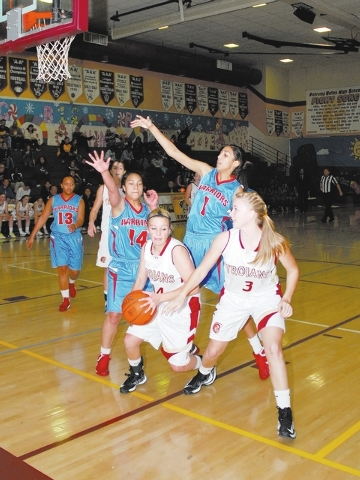 The Pahrump Valley Trojans got their first league win of the season as they traveled to Mojave last Thursday on one of the most emotional days the school has encountered. In the final minutes of the game, the Trojans were able to squeak out a win with a couple made free throws and some good defensive stops.

Ashford said, “I was really nervous for her. I kept calling out her name.”

Smith made one of the free throws putting the Trojans up 21-20. The team, including Ashford, expressed their relief on the court.

Ashford said, “When she made it we all started jumping in relief. At that point I knew we had it.”

Alyssa Murphy would be the next to test her mental strength as the next time down the court she was fouled and sent to the line making both of her free throws. Murphy admitted to being nervous as she stepped up to the line.

“It was pretty nerve-wracking. Their whole band was playing and I knew I had to make them, They had some good shooters on their team so we needed the points,” she said.

With such a low scoring game, it was pretty obvious it was a defensive battle between both teams. Trojans Coach Jennifer Hagstrom expressed how important it was for them to play strong defense to get the win.

“Mojave has gotten markedly better. We played man the first half and held them to 11 points which is a pretty good production. No. 12 is a pretty good left-handed player for them and we held her to low scores. Everyone played pretty well tonight. Ande Bishop came off the bench and played really good defense on 12 and frustrated her, which is always nice. That’s fun to see,” Hagstrom said.

One of the strongest aspects of the game was their ability to rebound the ball which has been somewhat lacking in previous games. Hagstrom was impressed with the team’s activity on the boards.

Hagstrom said, “We dominated on the boards. Shayla had 14 rebounds and Amber Skilling had some beast rebounds on the weak side.”

Beating Mojave was a big step in the right direction for the Trojans. Ashford admits the rest of the season would have been a little tougher had they lost to Mojave.

“Tonight was a big win. If we lost tonight we would have to beat Clark or Faith for a chance at the playoffs so it is a huge win,” she said.

Murphy echoed Ashford’s comments on the significance of the game.

“It was a big win. It felt good not to lose and it felt good that we worked hard together to pull it out in the fourth quarter,” Murphy said.

Hagstrom found significance in the team’s win not only for the future of the season, but due to the significance of the day. Steve Craighead, teacher and coach of Pahrump Valley High School had passed away Wednesday night leaving a lot of overwhelming emotions lingering in the school, players and staff.

Hagstrom said, “The girls’ teams swept tonight. Our freshmen won big, they are having a really good season. Trojans Coach Bob Bruce told us the first year Mojave was open Steve Craighead was there and helped open the school. It is kind of poignant we all won. Bruce and Steve were best friends and Bruce is part of this team so it was cool that we all won.”

The Trojans have a week of home games: Bonanza Monday, Faith Lutheran Wednesday and Clark on Friday. The Trojans lost to Bonanza in non-league action on Monday 49-31.