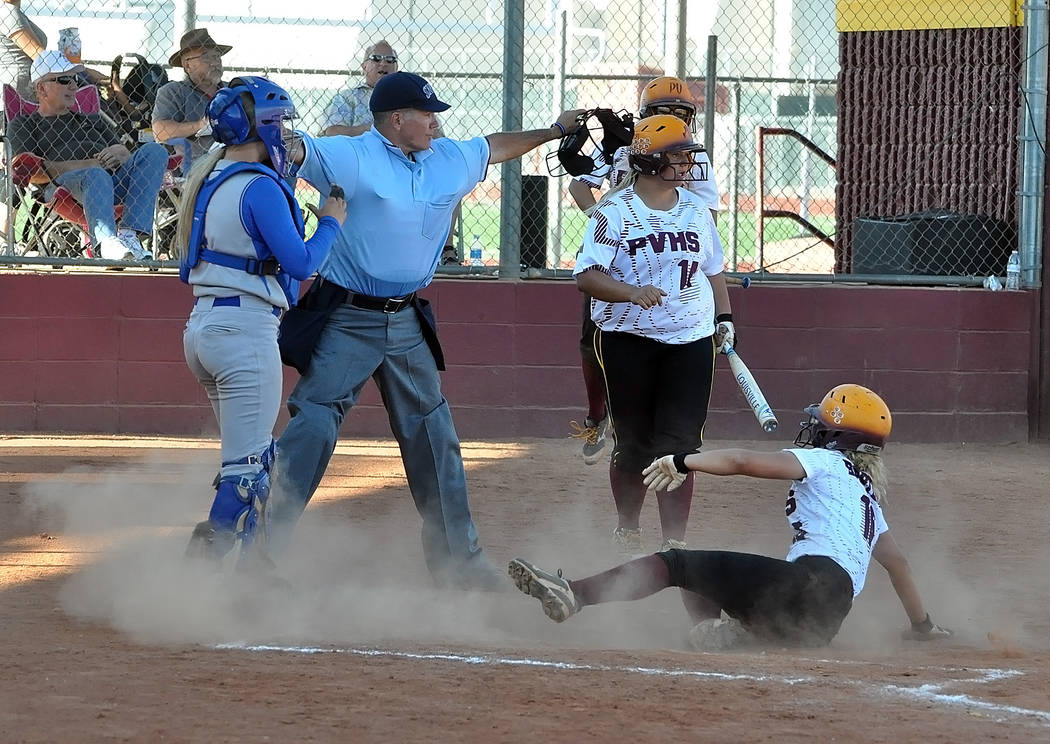 McKayla Bartley sliding home for a steal. The Trojans stole home on a throwing error by the catcher, which allowed two runners to cross the plate in the sixth inning, wining the game for the Trojans. 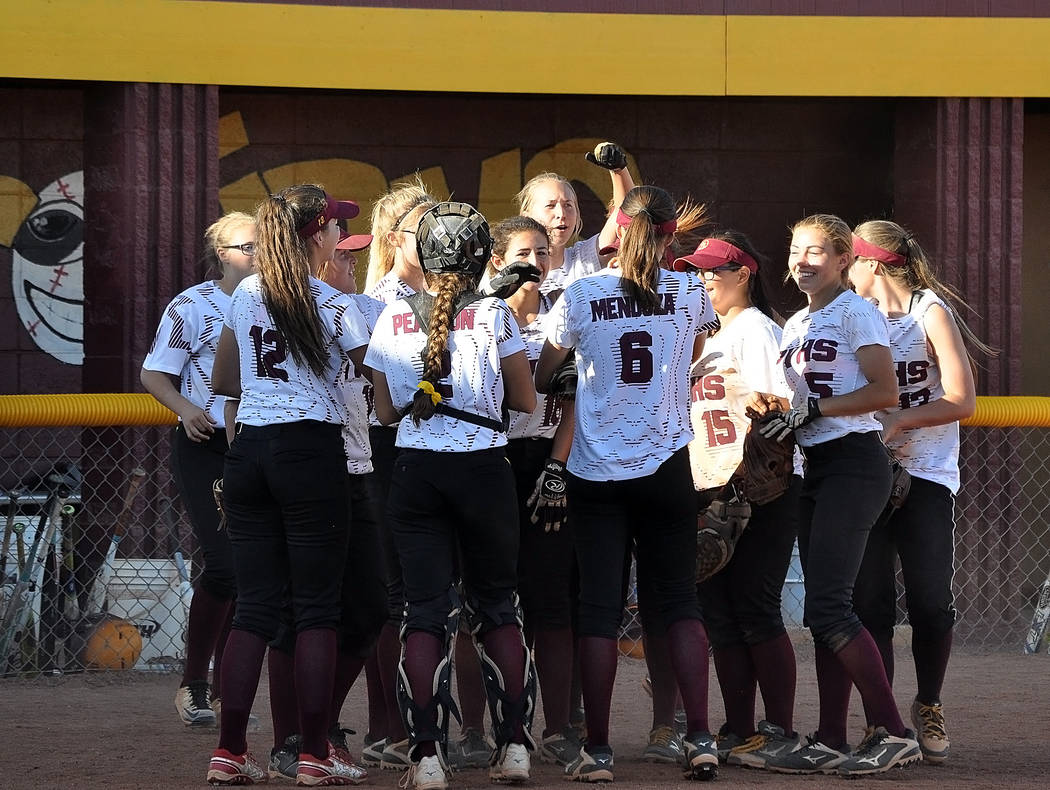 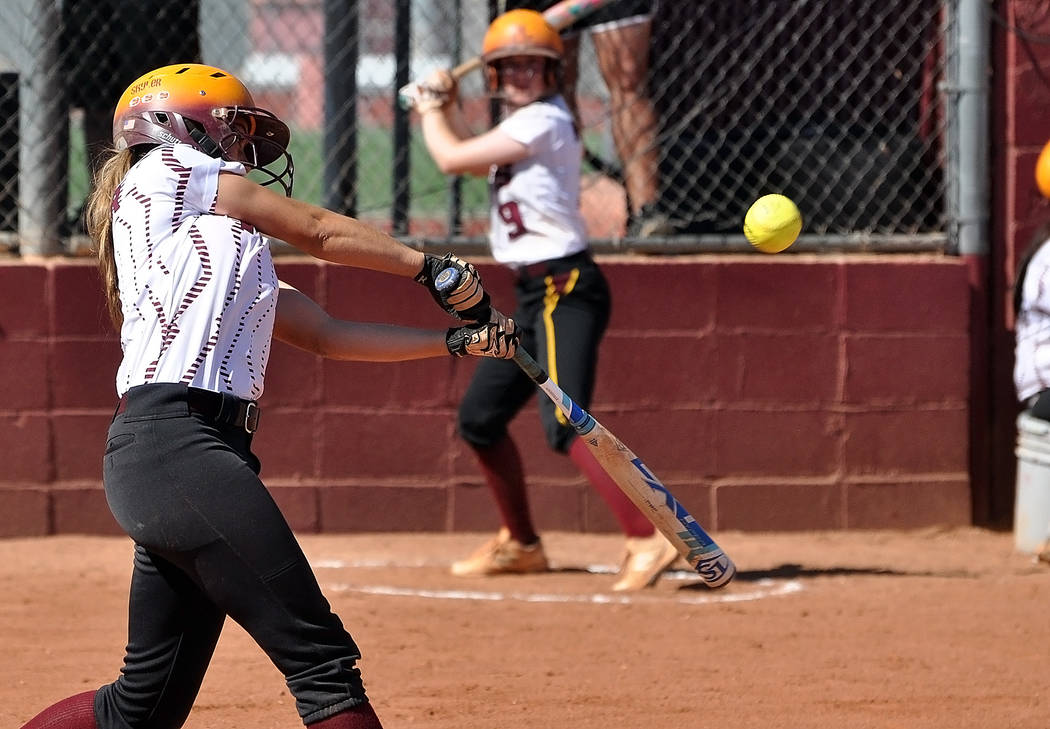 Horace Langford Jr./Pahrump Valley Times Skyler Lauver, who walked twice and had a single against Moapa Valley makes contact with the ball.

The first game wasn’t pretty, but as they say “a win is a win.”

Pahrump had scored just three hard-fought runs by the fourth inning. At the top of the third inning, Jill Smith walked and Terrena Martin got on board on an error. Skyler Lauver then sacrificed the runners over. Jordan Egan got on board with an error, scoring a run and sister Taylor Egan hit a double to centerfield, scoring another run.

The Cowboys had several big innings. Chaparral started off the game with a solo home run by pitcher Lois Brown in the first inning. They then got a run in the second, a run in the third and three in the fourth and led the Trojans 6-3 at the top of the fifth.

Pahrump then exploded for four runs in the fifth to take the lead for the first time.

Junior pitcher Amaya Mendoza got the win in that game.

Against Moapa Valley on Wednesday, the Trojans pitching looked sharper. Krista Toomer started the game, striking out the first two batters and getting the last one to fly out.The Trojans hitters put the first score on the board, coming alive in the first, scoring three runs.

Freshman Skyler Lauver started the first inning off with a single to left field. Junior Evandy Murphy hit another single. Both runners moved into scoring position on a passed ball.

Senior Jordan Egan hit a deep fly ball to left field to score one runner, and then sophomore Taylor Egan came up and hit another RBI fly ball to right field to score Murphy. Sophomore Jackie Stobbe walked with two outs and then junior Hailee Dannecker drove her home with an RBI single to give the Trojans a 3-0 lead.

The Trojans used three pitchers during the game. Coach Eli Armendariz said bringing in different pitchers keeps the other teams off balance.

“We also did this to conserve our pitchers’ arms,” he said. “We have three games in row and we don’t want our pitchers getting tired.”

Game was won in sixth inning

Pahrump had another big inning to win the game in the bottom of the sixth inning.

Mendoza led off with a walk and Murphy got on base on a Pirate error. McKayla Bartley ( pinch runner for Mendoza) stole home and the catcher made a throwing error which allowed Murphy to steal home too. Then Jordan Egan came to the plate and hit a single to left field. Jackie Stobbe hit a double to left field, driving Jordan Egan home for the eighth run of the game.

The Trojans then held on for the win thanks to the pitching of Mendoza in the top of the seventh inning. With two outs in the seventh, she struck out the last batter. Mendoza talked about that last inning.

“I was just thinking that I had to get them out and throw strikes for my team,” she said. “I got the last out on a fastball. I think our team has definitely improved a lot and we do really well under pressure. Our sticks (hitting) have improved a lot.”

Jordan Egan, one of the leaders of this young team and one reason the team is in the playoffs, said she plays head cheerleader to keep the team up during the game.

“I try to keep the dugout cheering,” she said. “When it gets quiet we get down on ourselves. So I try to keep the team pumped up and keep everyone’s spirits up. She said the team was over the close game against Chaparral.

“I think we were too overconfident against Chaparral and that led to some mental errors,” Jordan Egan said. “I am glad we took this game more seriously.”

“This year the Sunrise League has the home field advantage if the two number one seeds meet in the tournament,” Armendariz said.

If Pahrump beats Boulder City, it will not play on Friday and they will play in the regional championship game on Saturday. If Boulder City wins, then Pahrump will play one of the following four teams: Mojave, Moapa Valley, Chaparral or Southeast Career Technical Academy on Friday at the academy.