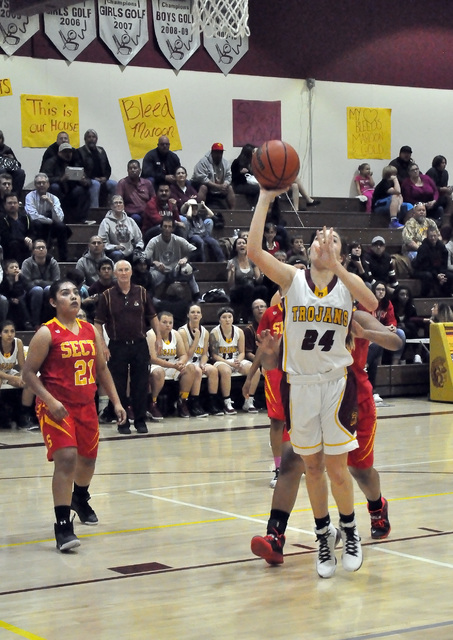 Horace Langford Jr. / Pahrump Valley Times Helen Vann goes for a shot against a strong Tech defense. Vann had five points in Boulder City on Wednesday in the team’s 27-26 victory. 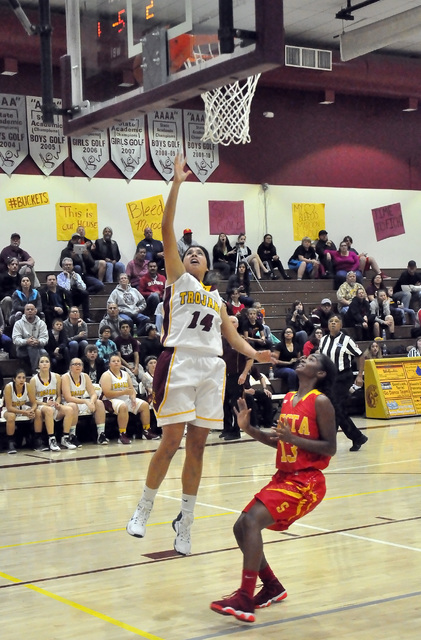 Horace Langford Jr. / Pahrump Valley Times Madeline Pereira-Villafuerte takes a shot against Tech last Friday. She had two points in the 47-17 rout against Bonanza on Monday.

The Lady Trojans basketball team edged Boulder City in the final seconds of the road game 27-26 in a non-league win.

“The Eagles had a quicker team than ours,” he said. “We had plenty of opportunities to score but we kept missing the short shots.”

At the half, Boulder City led Pahrump, 14-13. The game came down to the fourth quarter.

The coach said the Trojans (5-4, Sunset League) at one time were up by three at the end of the game and then Boulder City came back and went up by one in the last minute.

“In the last minute no one scored,” Hopkins said. “We made some defensive mistakes in the last quarter that led to them taking the lead.”

He then described how the Trojans won the game in the last seconds.

“Well, we had the ball out of bounds under the basket with under 20 seconds and we threw the ball into Jill Smith, who scored a layup for the win,” the coach said.

The Trojans were fouled multiple times by the Eagles (3-5, Sunrise League) in the last nine seconds, and held on for the win.

The leading scorer for Pahrump was Koral Hearn with eight points. Like all their games, the Lady Trojans spread the points around.

“We spread things around by design,” the coach said. “So every game a different player will lead in the scoring.”

The Trojans play a Utah team on Friday to start the Virgin Valley tournament they are going to Friday and Saturday.