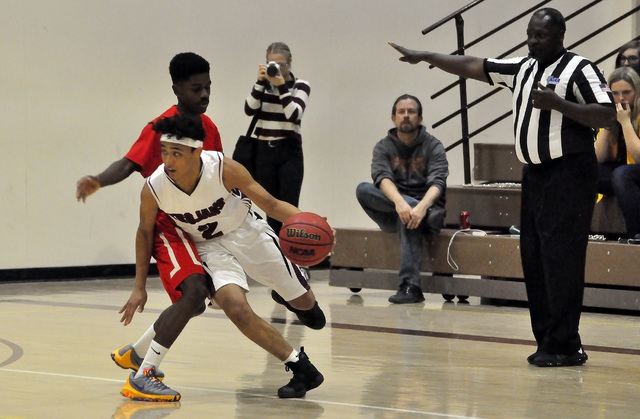 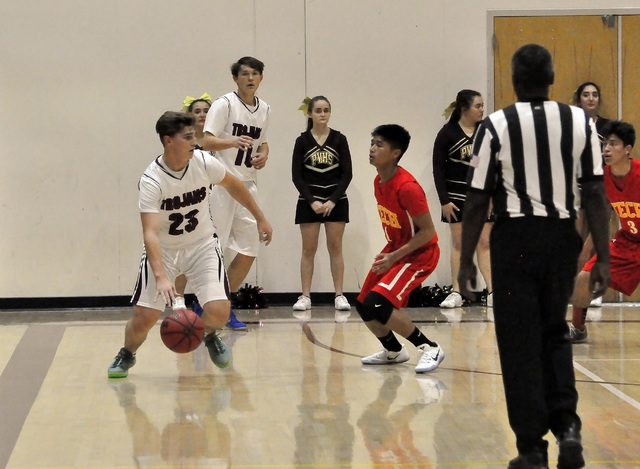 Horace Langford Jr. / Pahrump Valley Times Parker Hart looks for an open shot against Tech. On Wednesday he found a lot of openings as he led the Trojans in scoring with 20 points.

The Trojans built up a 20-point lead in the third quarter and held on for the win 70-66 in Boulder City on Wednesday in non-league action.

Trojans coach John Toomer said it was his offense that won the game.

“They hit a few threes in the end, but we shot 21 for 31 from the free-throw line in the second half,” Toomer said.

Assistant coach James Taylor said the 20-point lead started to melt away in the fourth quarter.

“A three-point barrage brought them to within four points,” Taylor said. “We missed layups and free throws and struggled to find their shooters in transition.”

He said it was in the last few minutes of the game that free throws won it for the team.

“Parker Hart, Bryce Odegard and David Sidhu hit some big free throws down the stretch to keep us ahead,” he said. “We handled their pressure really well and were able to run time off the clock until they had to foul and we started hitting free throws.”

The Trojans (4-6, Sunset League) had lost their last two games and needed a boost before the holiday break.

“The boys played really hard and definitely a team effort for a great win that we really needed,” Toomer said.

The lead scorer for the Trojans against the Eagles (3-6, Sunrise League) was Parker Hart with 20 points, and he was followed by Antonio Fortin, who had 15.

The Trojans play next at the Vegas Invitational over the holiday break on Dec. 26 at 1:30 p.m.