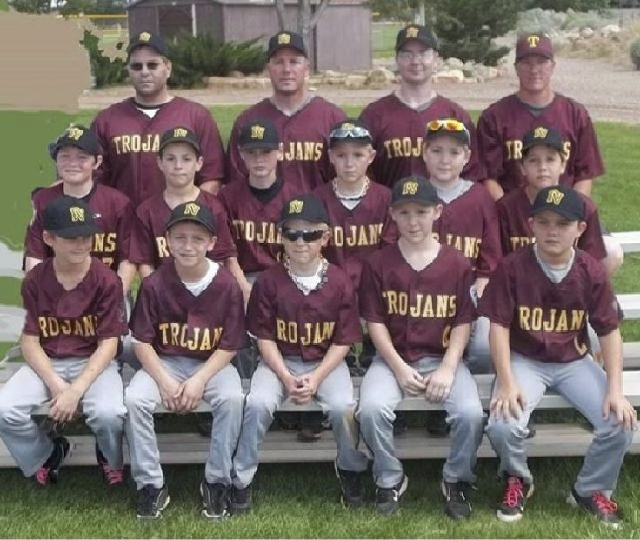 Pahrump Little League Coach Craig Havel said he and some other coaches have tired of losing to Las Vegas teams. Over the summer they took some action and formed a Little League travel squad comprised mainly of the minor league all-star team.

Havel is the manager and is assisted by Mark McDaniel, Courtenay Braithwaite, Sean Havel and Tyler Havel. The team consists of 12 players from ages 8 to 11. Havel said when the team travels they will take the top 10 players.

“I told my wife, ‘let’s get a group together and let’s go play more baseball,’” he said. “I take pride in my community and I know Las Vegas people look at the schedule and see it’s Pahrump and say ‘Oh we are going to win anyway.’”

They traveled to their first tournament in Cedar City, Utah and had some success. Havel said they went 1-3.

The team lost to the second-place team in the tournament 8-4. They played their second game and won 7-6. They lost the third game 13-9 and the last game they ran out of gas and lost.

“I think we represented Pahrump well. It was awesome. I have had these kids for about six months and they really have showed some growth,” Havel exclaimed.

The coach has felt the need for extra games in the summer and fall for kids who want to get better in baseball in the elementary and middle school age groups.

“If we do this now, losing to Vegas will not happen as much,” the coach said. “These kids that I have on the team gave up football and soccer. They want to learn more baseball, but just have not had the option. I want to give them an opportunity to learn more than what they learn in two months of Little League.”

Havel believes this is a simple solution.

“We explained to the parents what we want to do,” he said. “We are not going to overdo the tournaments. Tournaments will be on the weekends. We plan to work around the school schedule and I told the kids if they get bad grades and have a bad attitude they are not on the team. My goal is to develop the kids so they are better trained for high school.”

This sort of team is what Trojans Coach Brian Hayes has been hoping for. He has said all along kids in the valley need more of a baseball culture in this town if the high school team is going to get better.

Havel will take the team to another tournament during Labor Day called the “Back-to-School Brawl” in Henderson. The team will travel to St. George after the holiday and start fall baseball and prepare for a tournament in November. If you want your child involved, call Coach Havel at 702-353-8255.