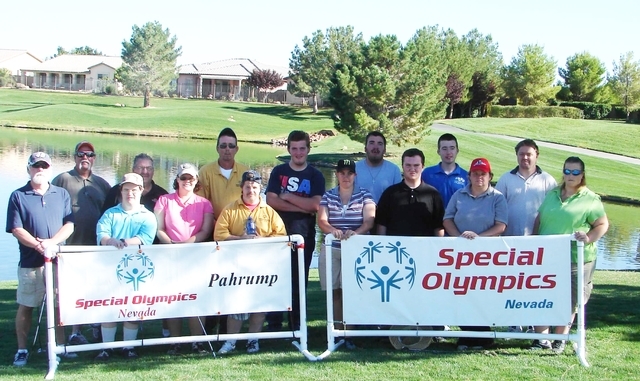 Pahrump Special Olympics spends about $14,500 per year and only $2,500 of it is generated locally.

“For some reason there are folks here that want to donate to Special Olympics, but want the money to stay in Pahrump,” Soltz said. “I have never been denied funds. Usually when I ask for money I always get a positive answer. All the money used is sent down to Las Vegas. All donations sent to Special Olympics Nevada stays in Nevada. If you want your money though to stay in Pahrump, that will not happen.”

Even though it does not stay in Pahrump, it comes back to the organization in the end.

Soltz says how it works is a person donates to Nevada Special Olympics and that money stays in Nevada.

He explained there are many factors that determine the cost of Special Olympics. Insurance, fees to use training facilities, uniforms, equipment, transportation, meals and awards.

He is thankful that the Nye County School District and the Town of Pahrump Parks and recreation both allow them to use their facilities at no cost.

According to Soltz, the annual costs of bocce, basketball, bowling, golf, track and field are about $6,000. The two new sports, soccer and aquatics will boost this cost up by $2,000.

Transportation costs about $3,000 without the two new sports. With soccer and aquatics it is about $4,200. The big cost of the year is attending the Reno Summer Games. The cost to attend is $3,300 for transportation of the team and $5,200 for meals and lodging.

Soltz emphasizes that there is no cost for the athlete to participate in the program.

All the money is donated by business, corporations, individuals and fundraisers.

This year Special Olympics has raised $2,500 from the Law Enforcement Torch Run, Moose Lodge, Mustang round up and other events. Obviously, this falls short of the $14,500 used. The extra money then comes from Special Olympics Nevada and this is why he would like to raise more money from this area, so that his program is pulling its weight.

In the end, Soltz said there are plenty of other things the community could do in Pahrump to improve the Special Olympics experience in the valley. It’s not all about money. The program needs volunteers to do many different things other than coaching. He said he will also be working on improving relations with the community.

For instance, he said some athletes have a problem with attending practices because their parents work and can’t take them.

“Many of our athletes can’t get to the practices because there is no public transportation. So if we could get folks to volunteer for two hours a week for eight to 10 weeks to give an athlete a ride to practices and back home, what a blessing as some parents work or can’t afford the gas,” he said.

Soltz hopes strip malls owners would allow Special Olympics to hang banners with contact information over empty spaces, until it is rented.

Special Olympics would also like to work closer with schools in two areas.

“I would like to work with our schools in an attempt to develop a unified sports program, which encourages athletes in school sports programs to share their ability by teaming up with a Special Olympic athletes, where they are not only teammates but mentors,” he said.

The other area would be the program called “Spread the Word, to End the Word.” This is aimed at middle and high school students to have them pledge to stop using the word “retarded.” Many consider the use of this word towards students with a learning disability as a form of verbal bullying.

“Our athletes and students look up to the sports teams at PVHS and it would be wonderful if one of the teams would come out as a whole and take the pledge,” Soltz said.

Soltz would also like to reach out to all the special needs children in the valley. “Upon reflection, I hope to reach everyone in the Pahrump Valley who has a special need and connect them with a program that would help to improve their quality of life,” he said.

“It’s all about our athletes. You have heard me say it before but it deserves to be repeated, we encourage everyone to attend a Special Olympics regional competition as it is truly a life-changing event, as our athletes demonstrate that their oath, ‘Let me win, but if I can’t win, let me be brave in the attempt,’ is not just words but a way of life,” Soltz said.