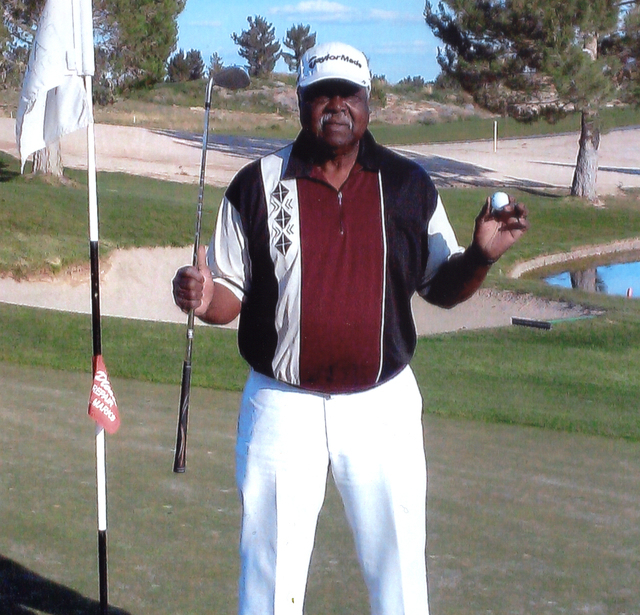 Clarence Jones hit his first hole-in-one at Mountain Falls Golf Course on hole eight, on February 20. It was a 142-yard shot on a par three hole.

“I have been playing golf for 40 years,” Jones said.

“This shot was a complete surprise to me. I hit the ball onto the green and it bounced. The wind caught the ball and pushed it into the hole. This was definitely on my bucket list to do.”

“He was excited when he came home,” his wife Kay said. “He couldn’t believe it and was definitely glad he had witnesses.”

Jones is the owner of C &L Storage in Pahrump and has lived here for the last 19 years.

“I play golf because it’s relaxing and a challenge,” he said. “The challenge for me is the long game. I can’t tell you how to make a hole-in-one, but I can answer all your Bible questions.”

Clarence Jones had an interesting story of how he got into golf. When he was a young man he played minor league baseball for the San Francisco Giants from 1962 to 1964 and he also worked at the Francisco Grande Hotel where Willie Mays and the Giants would stay during spring training.

“While I was working at the hotel I was talking to Mays and Mays asked me if I wanted his old clubs,” Clarence Jones said. “I turned him down because it was a sport I wasn’t interested in at the time, but I was inspired enough by Mays to get into the game later on in life.”

He said he got interested in golf when he retired and now he plays golf once a week.