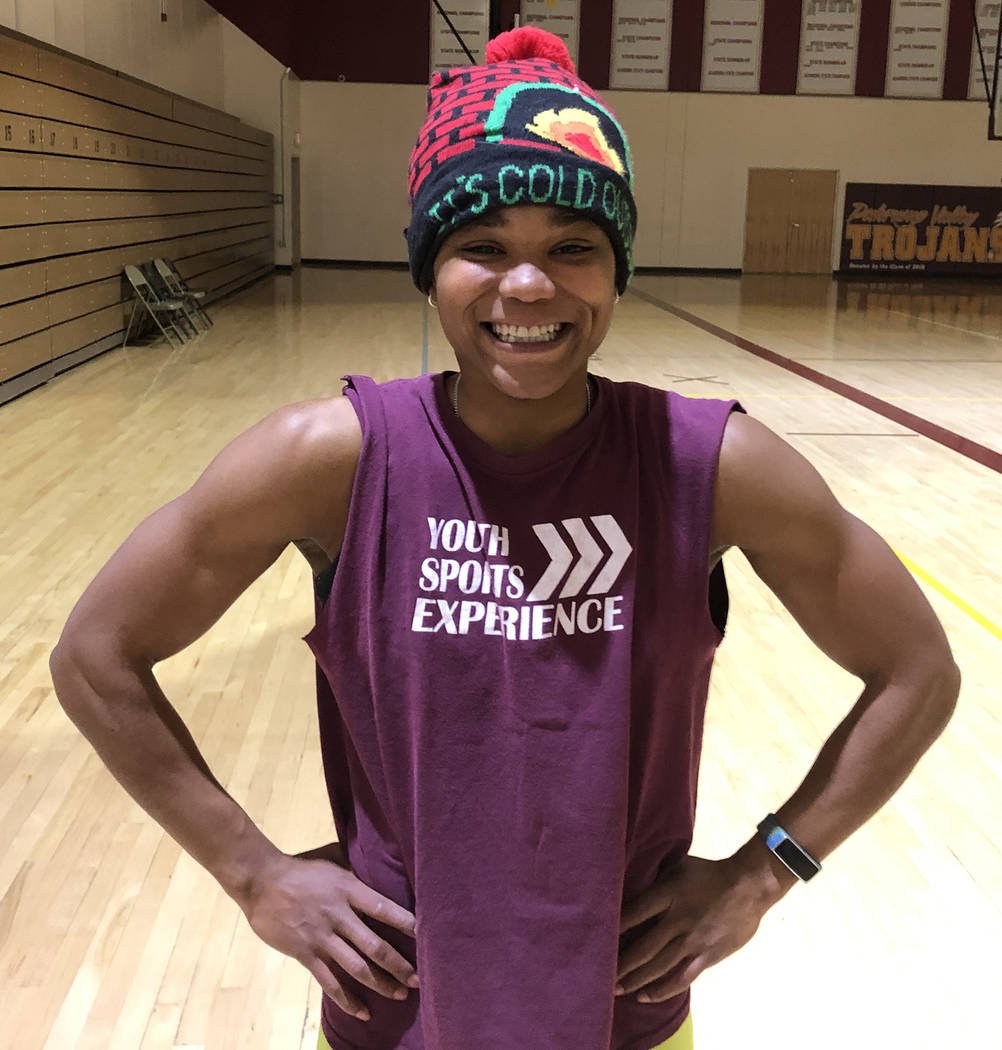 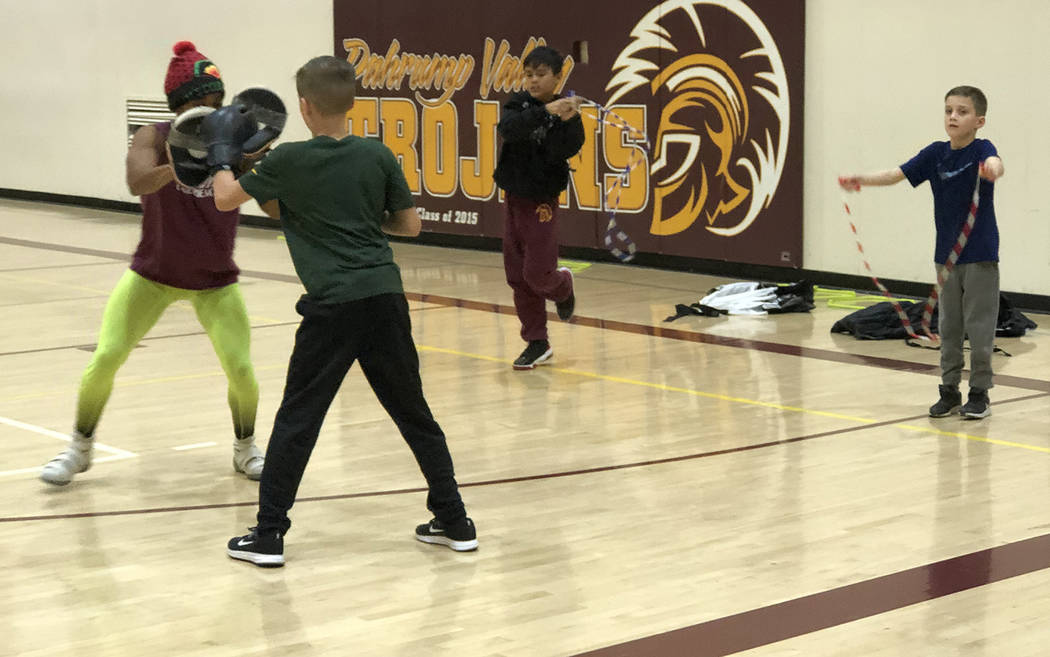 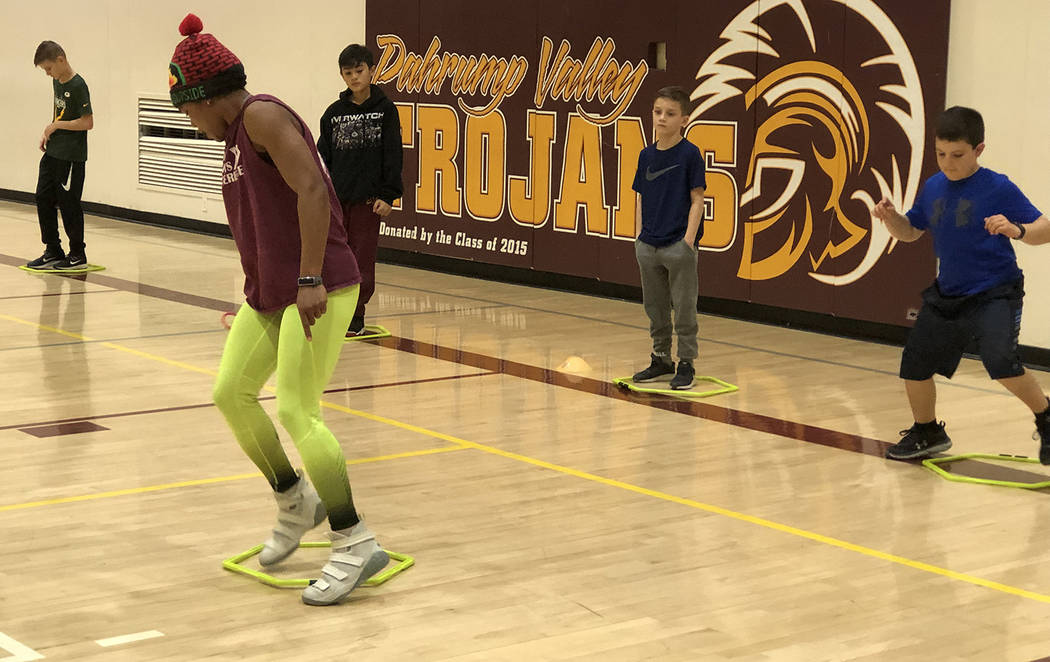 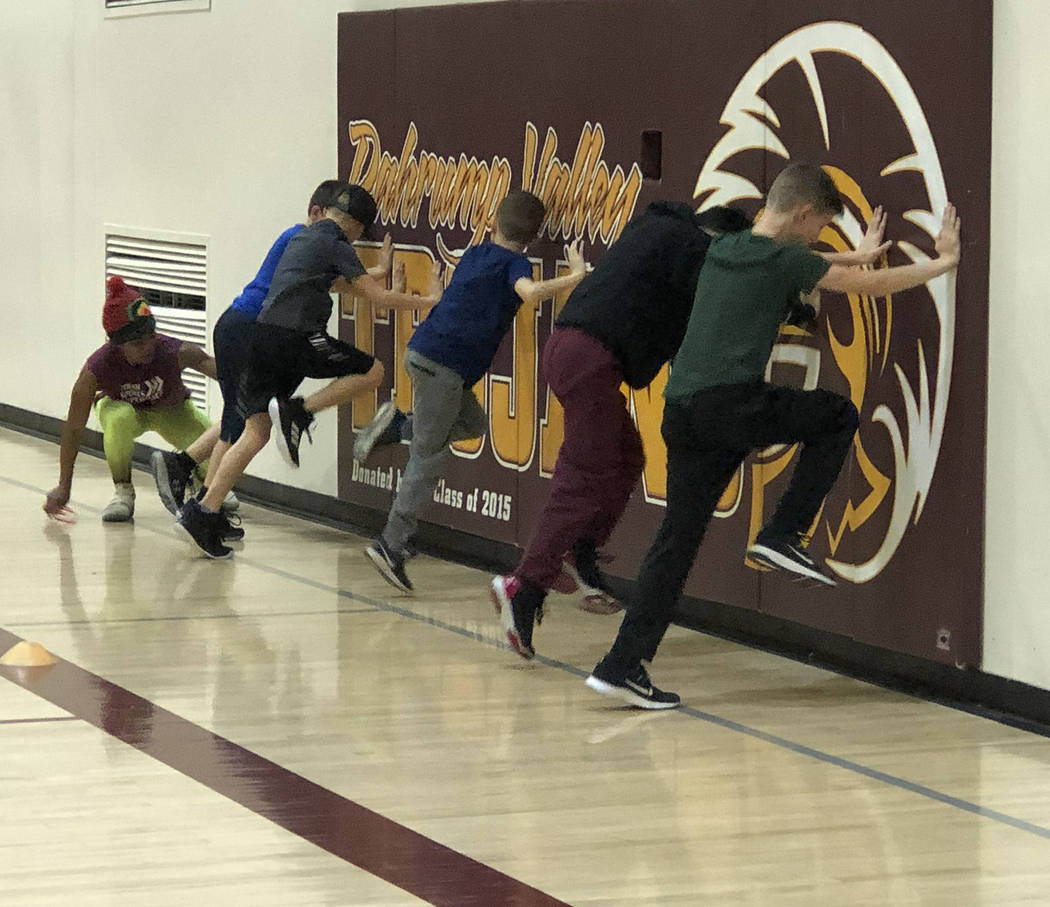 Tom Rysinski/Pahrump Valley Times Young attendees at "A Youth Sports Experience" get their form checked out closely by Dominique Maloy in the Pahrump Valley High School gym where she played basketball as a student.

“I’ve been here like three, four, maybe five times,” he says just after finishing the last drill, which involved running with parachutes. Sheppard said that was his favorite part of the session, which involved a variety of activities designed to help athletes with footwork, speed, coordination and — as much as anything — belief in themselves.

Maloy is something of an athletic evangelist. It’s not just about being able to run and jump and get your feet in the right place and in the right order. She builds up each kid — there were five ages 12 and under at a Saturday session in the school gym — and each one will know he’s a special young man with great abilities by the time she’s through with him.

It was just coincidence that all five of the attendees on this day were boys. Maloy, who has been running these clinics for four years, offers her training to young people from fifth through 12th grade, boys and girls. Even if just one person shows up, she will be at her ebullient best, working to bring out whatever that young athlete has inside.

“She’s so great with the kids,” Veronica Montanez said as she watched her 9-year-old son, Anthony, go through Maloy’s drills. “We appreciate everything that she does with them.”

“We actually went to school with Dominique,” Montanez said. “We played basketball together.”

Sheppard, like Montanez a member of the Class of 2005, is the daughter of longtime Pahrump Valley girls basketball coach Bob Hopkins. She had two sons there, as Keir’s younger brother, 8-year-old Kellen, also took advantage of the opportunity to train with a Trojan icon.

Although Montanez and Sheppard played basketball with Maloy (class of 2008), Maloy is best known for her exploits on the track. Fifteen times she won titles at state championship track and field meets, winning three events all four years. Her name is still on the record board in the gym despite graduating almost 12 years ago.

From there, she went to Arizona State, where she was on the Pac-10 champion 4×400 relay team as a freshman. She continued to place in regional and conference meets and compete in NCAA Championships with the Sun Devils.

So she has plenty of credibility when it comes to athletics. But you get the feeling it doesn’t matter. Kids are drawn to her infectious personality, upbeat attitude and welcoming demeanor.

For that, she credits influences from coaches she’s had in the past — Hopkins, Jason Odegard and Lance Englund at Pahrump Valley High School, her boxing coach, her track coach at Arizona State — for showing her that coaching is more than just telling someone what to do.

“My coach at ASU, when we did something good and hitting on all cylinders, he was really big on making sure to praise us,” Maloy recalled. “Even though I might have been younger, they talked to me like I was a being, a person, not just telling me things. And Mr. Hopkins, when I would go to his house and hang out with Darla, he was talking to me. We’d be watching games and he would be watching with me and talking with me.”

And the former Darla Hopkins can see Maloy taking those lessons and running — literally — with them.

“I love having Dominique train them because she’s a great influence, and I love how she gives back to the community,” Darla Sheppard said. “She’s so positive with the kids and gets them going.”

So why does her son, Keir, come to Maloy’s clinics?

“Because she makes me work harder,” said Keir, who plays football, basketball and baseball. “I get better from her teaching me. It just makes me a better athlete.”

For 8-year-old brother Kellen, like Anthony Montanez, it was his first time training with Maloy.

“I like playing sports, and I just want to be athletic,” said Anthony, who said his favorite sport is racing at Pahrump Valley Speedway but he also plays baseball and basketball. “I think the best part was doing the parachutes.”

That’s two votes for the parachutes.

As if there weren’t enough reasons to like having their kids participate in these sessions, Darla Sheppard offered another one.

“For five dollars a session, you can’t beat that,” she said. “In Vegas you’d be paying $20 for an hour session.”

The fact that people she went to school with are now parents who bring their kids to train with her is immensely satisfying to Maloy.

“Everything’s coming together in the way it needs to, and it’s so fulfilling,” she said. “To be able to train the kids of people I played with … I look up to them still. Veronica’s one athlete I feel could have been an Olympic champion if that’s what her dreams were. Darla, I thought she could have gone to college and played in the WNBA. I used to call her D-I.

“And now I’m training their kids. It feels like it was meant to be. And their kids are open to receiving it. It’s such a privilege. I could talk about them all day.”

The receiving of which Maloy speaks is not simply athletic instruction, it is something much deeper and on a much higher plane. The spiritual side Maloy brings to her clinics is always there. Follow her on Facebook and you see inspirational messages posted routinely, and other messages celebrate the accomplishments of local athletes and, sometimes, athletes from elsewhere that overcame some sort of obstacle. That, too, is part of the message: Don’t let anyone or anything dictate what you think you can do.

Even better is that the kids don’t even realize that’s what they’re being told. Maloy makes it sound so natural, so logical, that you should believe in yourself that it doesn’t come across like a life lesson. It’s just the way it is, as Maloy and the kids somehow connect on an unseen level and great things happen.

Sure it sounds like psychobabble, but when you know someone is genuine — and Maloy is nothing if not genuine — the cynicism and skepticism melt away. And if it works on adults, you know the kids, not prone just yet to be skeptics and cynics, are receptive to it. But to Maloy, she gets at least as much as she gives, and maybe more.

“First-timers, someone who’s been here four years in a row, someone that comes every once in a while, no matter what the situation is, it’s always different,” she said after Saturday’s session. “It’s always such a blessing what the gift is in it. There seems to be an opportunity for me to train kids, make them better, but something deeper happens. It’s sometimes hard to put in words because I almost can’t believe it. There’s no age, there’s no height, just beings here accomplishing life.”

Accomplishing life is a catch-all phrase that sums up Maloy well. No matter what she is doing, on some level she must be growing from it or it’s a waste of time, and helping other people grow means she is growing as well, like they are all part of some sort of cosmic garden that needs attention from well-meaning people, starting with each other.

And Maloy feels it. She might be training the kids, but she feels strongly that she is the one benefiting.

“Life, source, God, by whatever name, the goodness has been coming back to me,” she said.

And so have the kids, many of whom attend multiple sessions each time Maloy runs one of her camps. Not only does she do several sessions of “A Youth Sports Experience” a couple of times a year, she will run training sessions for teams or groups, as she has for baseball and basketball teams, among others, in Pahrump.

“When I’m not training the kids, I’m training myself,” she says, wanting to stay ready for “football, the Olympics, whatever is next.” She played football for five years in the Legends Football League, and while she likely has played her last game with that organization she remains interested in playing football. But Maloy, who still calls Pahrump home, always comes back to the kids.

“It feels like heaven on earth when I’m with the kids,” she says. “It’s just us. I forget how cool that is until I go out in the world. I find it easier to be unconditional when I’m here with them. I love it.”

And they love her. Doing what is asked of them gets a big “Thank you” or “I appreciate you” from Maloy, and when the hour is over, everybody gets a hug. And Maloy, not much taller than most of them, gets as good as she gives there, too.

All in all, it looks pretty good to be Dominique Maloy. Is it?

“Yeah,” she says with her trademark huge smile. “It’s a blessing.”