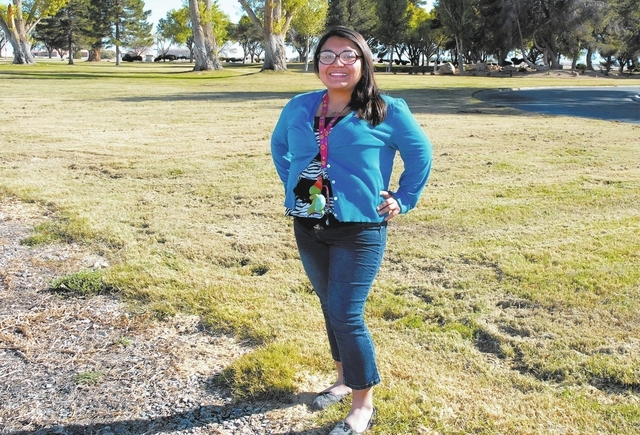 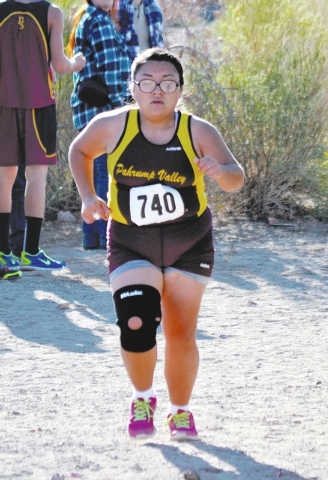 Maria Melendez could probably get into any university in Nevada or most in the country. Her 4.0 GPA and her work ethic are traits most colleges would be proud to have. Instead, she is chasing after her dream she has wanted since she was eight years old and that is to join the armed forces of the United States.

“My favorite holiday, is Veterans Day. I like it because you are honoring all the veterans that died. Both of my parents were in the military,” Melendez said.

For most athletes, this is not a hard challenge. The military seeks top athletes who are high achievers, but for Melendez this has been a challenge all her life.

Melendez is not the star of the cross country team. Her name is not up there with top five runners on the team and she is not in the middle. The fact is a good race for her is when she does not finish in dead last and yet she is a winner. Close to her goal of joining the military she carries on in two sports, track and cross country.

She is a winner because she continues to race and she has not given up on herself and her goals.

“She is a good example of a person who never gives up and she has a lot of perseverance. Every time she finishes it’s a huge victory,” he said.

All her life adults have failed her, but she continues on. Her freshman year she was put into foster care. Her biological parents failed her, but her foster parents did care and have never stopped caring since the day she arrived.

She was supposed to be with Hank and Bernie Maglia, her foster parents, for only four months. She is in her fourth year and still going.

Melendez is not alone. She is the oldest of four brothers and a sister and all six went to the same foster parents.

The Maglia’s are in the process of adopting all of them, every last one of them. So far, they have adopted 12 children.

“I do remember my parents. My mother is still alive. There is a big issue with my dad. My mother I have found. I left when I was 13. I basically look at my foster parents as my parents. People really don’t believe me when I say Hank is my dad because of his Boston accent,” Melendez said. Melendez is a Latina who was born in Mexico.

With all that against her, Melendez presses on. In her mind she is not a foster kid. She is part of a family that loves her and with this love behind her she believes she can do anything.

Hank is dad and Bernie is her mom.

“It was really nice. Bernadette does not really want to lose them because she is attached. Even though there is a lot of fighting and a lot of things which really should not be going on she still loves them. All my brothers and sisters do very well in school,” Melendez said.

In her home, the Maglia’s give her structure and all the love she needs.

“When these kids arrived, not all of them were getting good grades and now all of them are on the honor roll,” Hank said.

He attributes this to the firm structure he imposes. Some of the rules are there are no video games during the week, all of them have chores and they all must do their homework every night. The most unusual rule though is their bedtime.

“People think I am nuts, but all the kids are in bed at 7 p.m. I do this because kids stay up for two hours past their bedtime anyway. My little ones are up at 5:30 a.m. so they need their sleep. I go to bed at that time. I am watching TV, so I expect them in their rooms. They can talk, but the bottom line is they are not in the living room watching TV,” he said.

This year Melendez was determined to improve on her cross country running. She did that by almost improving by a whole minute in her 5,000-meter time. The determination to join the military has led her to drop 25 pounds in the last year with just 15 more to go by the end of the school year.

“I wanted to go into the army, but they had height requirements. I am 4 foot 9 inches and you need to be 4 foot 11 inches. The navy has a lot of height waivers because they want a lot of shorter people, shorter than 6 feet,” she said. “I am graduating this year in June and I leave two weeks after I graduate. The Navy said I have to lose 15 by the end of the school year and I have lost 5 pounds so far with 15 to go. Five pounds is a lot for me. Last year I weighed about 165 and this year I weigh about 140. I was really slow last year and this year I am not so much.”

According to Athletic.net, Maria Melendez’s time for the Lake Mead Classic, a 5,000-meter course, was 40:16 last year and she finished last. On the same course this year she finished second to last, but improved her time to 39.36.5. The Lake Mead Invitational is run at the Boulder Veterans Memorial Park and is a championship course.

Hank feels she is headed in the right direction and is very proud of her accomplishments.

“She is a very determined girl. She knows she has to get down to the limit with the height restriction and the weight restriction. She can’t have both. She can be short but she has to make the weight limit. In addition to working out with her team, she does Billy Blanks Tae-Bo here in the house and she is dedicated with what she eats. She does not eat a huge breakfast and watches her meals. She was getting pretty diabetic and now she is doing pretty well,” he said.

He related a conversation he had with Melendez concerning her cross country which he feels captures her excitement and how she sees the sport, “It’s funny how she gets excited about cross country, she would come up to me and say, ‘I passed four people today.’ and I would ask her, ‘Great, what place did you come in,’ and she would say, ‘Last.’ and I would ask her, ‘If you passed four people, how did you come in last.’ and she would say, ‘Oh, they passed me on the hill.’”

Melendez looks up to her brother, Shawn, who is in the navy now as a corpsman. She wants to be an RN for the navy. In order to get into the U.S. Navy’s nursing program she has to score high on the Armed Services Vocational Aptitude Battery. Her mom scored a 98 on the test so her goal is to beat that score.

“I want to score a 99 and that is the best you can do on the test,” Maria said. “I have been studying like crazy.”

Her brother is in San Diego and they communicate a lot.

Another influence to her had been her sister Marcy. Marcy lived on the property up to last year in the back house the Maglia’s had. The two talked a lot together about life. Marcy passed away last year.

“My sister Marcy was very influential in me keeping my grades up. She came in 2009 to live here and if she would have lived she would have been 35. My brother Shawn and I used to sit and talk with my sister that died. It took me a while to realize that she was no longer with us. I would go to the back of the house and she would no longer come out,” she said.

Melendez sees a lot of kids around that don’t graduate and she wants to influence kids who feel they can’t accomplish anything with their lives. She does not believes people when they say, “I can’t do it.”

“I want to make a difference in the world. I want to tell them, ‘You can do things in the world. They believe they can’t because usually people tell them they can’t. For example, my little brothers when they say they can’t do something. I say, ‘Yes you can.’”