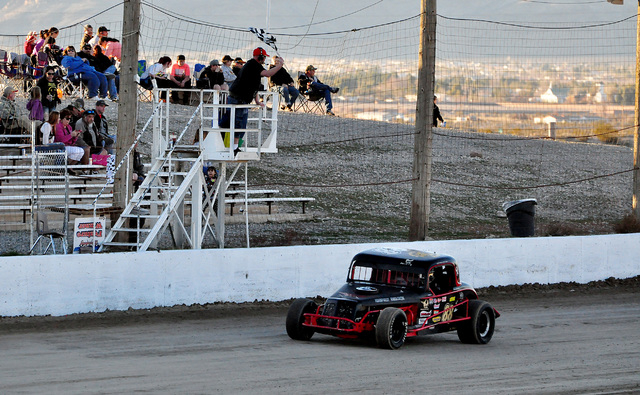 During the brief offseason in December and January, track owner and operator Chad Broadhead said the track got a facelift.

“We had some painting done on the track,” Broadhead said. “The big work was done on the track itself. We had a two-week period where Bryan Wulfenstein, the Pikes, Rafael Flores, Lealand Hampton, Joe Wabsis and Eric Shenberger all worked hard to put new bank turns in. I race on it and it is smooth.”

The speedway even has added lights to make it brighter on the track.

In addition to track improvements, the speedway has added more management to help with the operation of the track on race day. Jerry Buesig and Jon Broughton are helping Broadhead run the track.

“These guys work behind the scenes to keep the drivers from getting too frustrated,” Broadhead said.

According to Broadhead, the track numbers are up but he still would like to do better.

Broadhead has set his sights on getting 50 to 60 drivers per race this year.

“We have reached it this year but I want this to be every race,” he said. “We got a ton of new drivers out here, but where are all the old drivers.”

He said at the track hardly anyone races for points out here so he thinks more drivers should be out.

“The drivers should just come out here to race and have a good time,” the operator of the track said. “But drivers get mad at each other and can’t put their differences aside. Just come out to the track and race and enjoy it.”

He said that’s where Jerry Buesig comes in.

“I started earning the respect of the drivers last season,” Buesig said. “There are 20 Modified drivers and people want to see that class so I have been calling them.”

The track knows if it can keep the Modified numbers high, the fans will return to the track. He said he just asked what it will take to get them all to come back.

“I would call each individual driver and ask that question,” Buesig said. “One of the things the drivers wanted for the Modifieds was to get the Trophy Dash back. So now it’s back. We are also changing procedures too.”

The Trophy Dash is where they have the top two drivers in a heat compete in a five-lap race.

One of the things the track got away from over the years was the tech inspection after the feature race.

“We now take the top four racers and do a tech inspection,” he said. “This keeps things fair for the drivers.”

Buesig also said the track is not putting up with fights and in-fighting.

“We used to have a lot of animosity and tension at the track and now we got rid of all the trouble,” Buesig said. “We already have four suspensions. I think people are now just having a better time.”

Buesig agreed with Broadhead that points were not that important as it had been in the past.

“Points are not as important, but there are still people going for the points,” he said. “Clifton King won $1,300 for his points last year.”

The bottom line is that the changes have earned the trust of the drivers so the drivers are coming back.

“I really don’t mind my new role,” Buesig said. “I think it helps that I am a racer myself.”

He also added that they changed it so the beer booth in the back is now open after racing and people are now staying to have a few after the races.