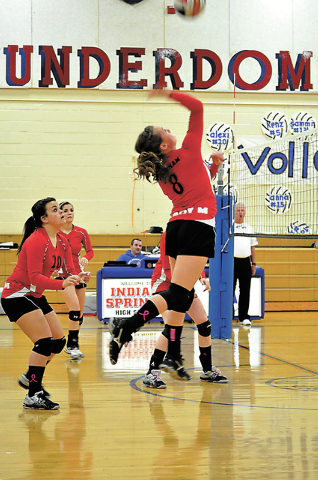 The Lady Muckers volleyball team beat Indian Springs in three straight, 25-20, 25-18 and 25-18. Tonopah now is preparing for the toughest foe of the season, the Pahranagat Valley Panthers, led by Panthers Coach Ginger Whipple.

The Panthers are also undefeated and will be coming to Tonopah this Friday at 3 p.m. This game should be one of the best Division-4 games of the year.

The Muckers Coach Harvey Gonzalez used Indian Springs as a punching bag to get his team ready for the Panthers.

“We had really good serving that day. We had a couple of mental errors towards the end of each match, which let the other team back in. So the score was not what it should have been,” Gonzalez said.

The team is now focused on fine-tuning the offense for Friday.

“We are trying to get everyone involved and I also talked to my setters. I used to set so I understand what it is like. I have that philosophy that you feed the hot hand. If your middle is tearing them up, you feed them,” he said.

Pahranagat Valley has a very good defense, which means the Muckers will have to attack them in different ways. Whipple said her team is not a very tall team and relies on being able to dig balls out of the ground.

“I tell my hitters never let up. Adjust, it does not mean you have to take off. If you are hitting them hard and they are digging them it just means you have to put them in front of them or make them move more. They have to be able to change and move their hits. Change the angle and make them adjust to your hits,” Gonzalez explained.

The Panthers will come after the Muckers with a balanced attack said the coach.

“Our kids need to get over the mental issues with beating Alamo. There is a lot riding on this game. Whoever wins hosts the first round of the playoffs,” he said.

The Muckers have some veterans from last year’s team like Sydney Maughn, Julia Klapper and Elise Salbury. These girls know what it takes to win a state championship and Gonzalez appreciates having them in the lineup.

“I tell the the team we are defending champs, but we have not won anything this year. To be champs you have to play like champions,” he said.

The winner of this game gets to sleep at home and not in a motel and that can be important to the team. Some teams are not road teams.

Gonzalez loves games like this where everything is on the line.

“This is what the season is all about,” he concluded. “Our team will be ready to go fundamentally sound and mentally sound.”