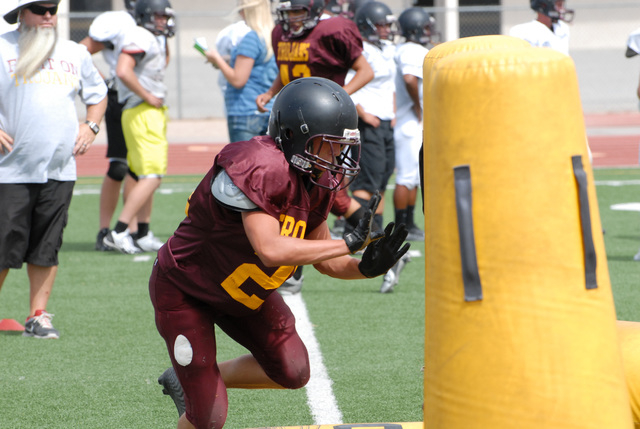 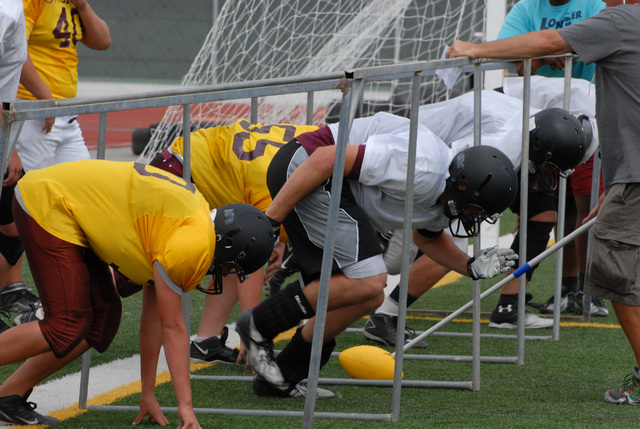 Pahrump could end up on top of the Sunset League this year. I am going to go out on the limb and say that the Trojans finish near the top — either first or second in the Sunset League, Division I-A.

I say this after looking at what the Las Vegas Sun put out and looking at the various rosters that came out. One impressive sign is the amount of Trojans coming out for football this year. The varsity program has 72 players.

The Las Vegas Sun came out with its top 10 high school football picks for the 2014 season in Southern Nevada. The Sun easily picked Bishop Gorman to be the Division I state champion this year. Gorman is the top ranked school in the nation and has won the state championship five times in a row.

On the surface, it looks like the Sun snubbed the Faith Lutheran Crusaders. How can they ignore the defending I-A champions and not put them in the top 10 teams in Southern Nevada?

The Faith Lutheran Crusaders under Vernon Fox won their first state football title last year, and it seemed on the surface the Crusaders should have been chosen instead of the Moapa Valley Pirates in the Sun poll. Instead, the Sun picked Moapa Valley, a perennial powerhouse as the tenth best team in the Valley. Under Zach Hymas the Pirates averaged 146 yards per game in the air. Hymas threw close to 1,900 yards last year.

Of course the pick doesn’t mean a thing. The Crusaders were left out last year and they won the state title anyway. Right? I don’t think so this year.

The Sun chose Moapa over Faith because Faith lost 20 seniors and will be replacing many positions with untested players. I think the key to any team is the quarterback. Faith has two quarterbacks listed on this year’s roster, junior Brendan Joyce and senior Greg Benson. Of the two, Benson played in eight games with 18 completions and Joyce has no stats. Since Benson is a senior though, Fox might defer to Joyce.

The Crusaders return with good size on paper, but again have little experience on the defensive line. They have a kid, Michael De Vore, at 5-10, 255, a senior but no experience. Cameron Meredith is another. He is listed at 6-7, a 334-pound sophomore, but has no stats last year. Mikal Kenny, a senior at 6-1, 228 pounds, also has limited experience.

In the rushing category, Faith graduated its top rushers, which also left them with little experience. Sophomore Christian Marshall totaled 107 yards on 21 carries and junior Robbie Schwartz had 18 carries for 106 yards.

The question for this year is can the talented coaching staff of Faith Lutheran put together and mold a competitive team? Although Faith Lutheran is often criticized in other areas, hiring poor coaches is definitely not one of them. I can guarantee that Faith will return as a football powerhouse. It may not be this season, but it will happen.

The one position that the Crusaders return strong in is wide receiver. Mark Rubalcaba had 36 receptions for 431 yards. Rubalcaba has both good hands and speed. Those two qualities plus his experience should have him leading his team in receptions this year.

When compared to Pahrump Valley on paper, the Trojans come out on top. This year the Trojans roster reads like the town phone book. Trojans Coach Joe Clayton has a huge roster of talented players.

This year the Trojans come back with veteran QB TJ Milk. Milk had some great stats last year for a sophomore. He had 28 completions for 494 yards. Under Milk the Trojans averaged 79 yards in the air and 180-yards rushing per game. With more confidence, look for Milk to complete more passes. He will have 6-foot-4, 245 pound Jeremiah England and 6-foot-1, 260 pound Jeremy Coates to throw to. There will also be Deon Estes who averaged 18 yards a reception.

On the ground, the Trojans lost Scott Maughan who had 158 carries for 716 yards. They hoped to give the ball more to Keenan Harris and Sam Tuscnak.

Defense is everything and I really see the Trojans making some strides in the defensive backfield. It has been a sore spot with the team, but this year they have a chance to make gains in this area because I believe having two big defensive ends in Coates and England, that the team will see some results. The ends are experienced and will put some pressure on offenses.

The Trojans are coming off a great summer, which started at the Southern Utah University Football camp. Summer camp will end this week with the Trojans scrimmaging at Durango High School in Las Vegas on Saturday.

How is the rest of the Sunset League?

Clark will have a veteran quarterback returning in Kareem Warren. He had 51 completions for 1056 yards. Clark graduated 17 seniors and Mojave graduated 15 seniors last year. Look for Clark to be a tough team to beat for the Trojans.

Mojave will be another threat. They have 45 on their roster with 17 returning seniors. Mojave has Zack Arave, a senior with experience returning. He had a QB rating of 54. The team averaged 80 yards per game in the air, and 262 yards per game on the ground. Look for them to come at their opponents with a solid rushing attack. They should also finish in the top five.

Cheyenne lost over half of their team to graduation. Cheyenne’s defense gave up too many points last year. If they tighten up their defense, they will be a threat. They finished 2-3 in the division. The Desert Shields return this year with a lot of experience, 15 seniors and 20 juniors. The Shields return with senior Anthony McConnico as QB. McConnico threw for 636 yards. In the rushing department, senior Jordan Johnson returns. He was their lead back with 133 carries for 616 yards. The Desert Shields love to run.

Spring Valley was 2-3 in the Northwest League, Division I last year and finished 4th. They beat Durango and Sierra Vista to win a fourth place berth in the playoffs but lost to Bishop Gorman 56-0. They have 55 men on their roster this year and have two juniors and a senior with QB experience. Spring Valley lost badly to Mojave last year, 27-6.

Pahrump will finish in the top two. I see Mojave up close with Pahrump, Faith next, then Cheyenne, Spring Valley, Clark and Western.