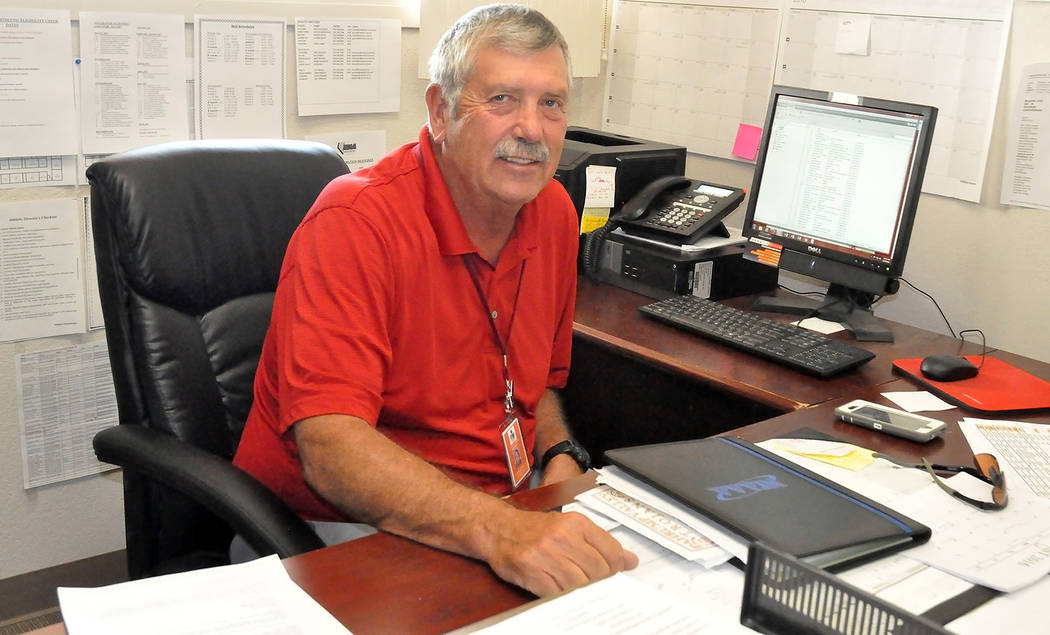 Horace Langford Jr./Pahrump Valley Times Pahrump Valley High School Athletic Director Larry Goins at his desk when he returned to his position at the school in 2016 after 14 years at Sierra Vista and Desert Oasis high schools and a temporary two-year retirement. 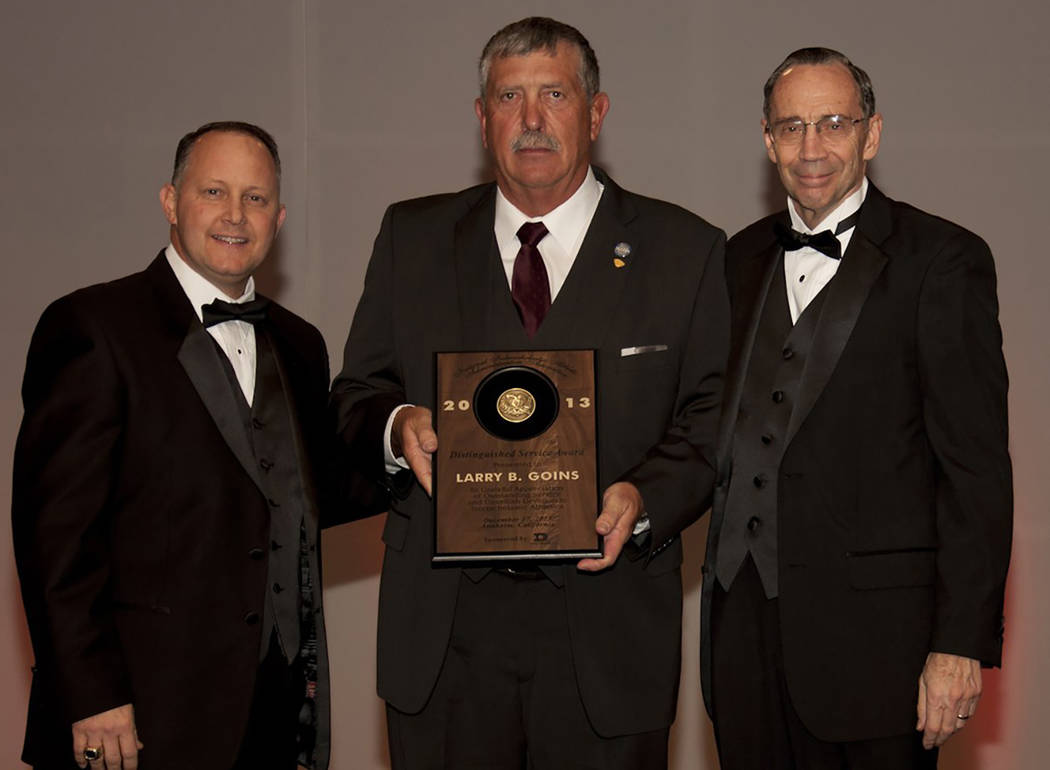 Special to the Pahrump Valley Times Larry Goins, center, receives a distinguished service award from the National Interscholastic Athletic Administrators Association in 2013, just the third person from Nevada to be so honored. At left is then-NIAAA Executive Director Bruce Whitehead, while then-Associate Executive Director Philip Rison is at right. 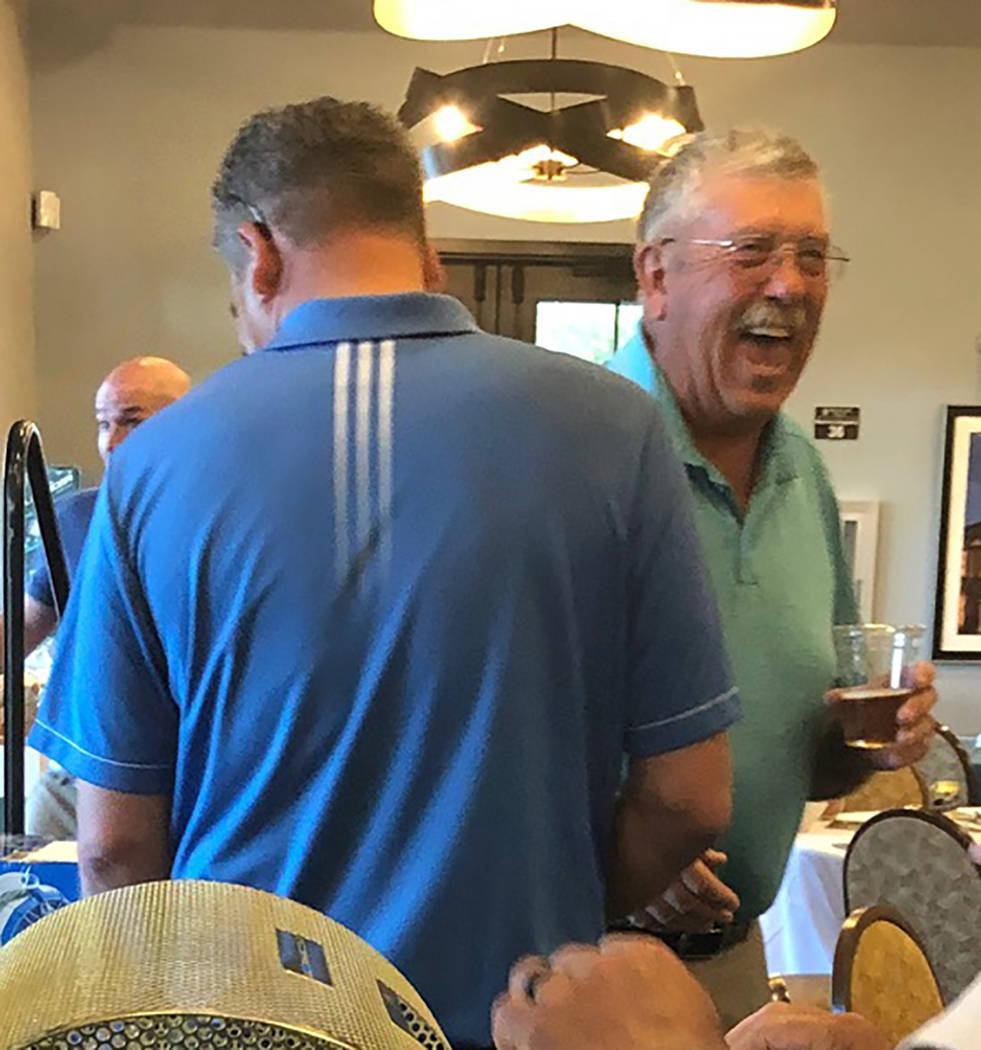 Tom Rysinski/Pahrump Valley Times Larry Goins, right, at the annual Quarter Auction at Mountain Falls Golf Club to benefit the Pahrump Valley Youth Golf Founders Club, of which he is the president. Although retired from education, Goins remains an active supporter of youth golf in Pahrump.

There’s no great story behind how Larry Goins found out he was voted into the Nevada Interscholastic Activities Association’s Hall of Fame.

“I’m on the selection committee,” he said. “In fairness to those other guys, I stepped out of the room while they considered my nomination.”

Not that there was much to consider, as Goins’ long career and active participation in athletics at the state level made him an obvious choice. Goins was inducted along with 10 others Thursday night at the 27th annual NIAA induction ceremony in Las Vegas.

The former Pahrump Valley High School athletic director likes to say he never actually has worked because he enjoyed the time with the kids, but those who have been around him over the years scoff at that notion.

“Anything that we needed, he would either help us get or tell us what we needed to get it,” said Pahrump Valley High School baseball coach Brian Hayes, who called Goins the best athletic director he has worked with in 15 years of coaching at the high school level. “His Trojans of Character program that he brought with him is a great program not only for the high school kids but the kids down at the elementary level.

“As a K-5 physical education teacher, it’s awesome to see our elementary kids’ faces light up when they get trading cards of the high school kids that they look up to. The leadership council that he developed is a great way for athletes in our program to learn about leadership and how to be leaders in our own program.”

“He always thought it was important that we help develop skills, like leadership, in students that extended beyond the playing surfaces and that they could use throughout life,” added Jason Odegard, Pahrump Valley’s athletic administrator.

Goins was nominated for the Hall of Fame by Dale Norton, Nye County’s superintendent of schools.

“Larry has been a great asset to Nye County, Clark County and to the state of Nevada as a whole,” Norton said. “Over the 28 years I’ve known Larry, he has been a student advocate, leader and role model. Larry certainly deserves to be in the NIAA Hall of Fame, and I’m proud to have nominated him to receive the honor.”

Of course, the Pahrump Valley High School that Goins found in 1985 was a very different place than it is now.

“We had 324 students the first year I was here,” Goins said. “The reason I know that exact number is because the cutoff to go to Double-A was 325.”

The Trojans soon were at the Class 2A level, and Goins looks back fondly at those days.

“We had a great 2A league that ranged from Ely all the way down to Needles, California,” he recalled. “Our short trip was to Boulder City.”

Now in a league with schools from Las Vegas and North Las Vegas, the travel isn’t nearly as rough. Even so, you don’t spend that many years in a job that often comes with a target on your back without loving the work, and Goins doesn’t even call it that.

“I guess I never really worked a day in my life,” he said. “I really enjoyed what I did, and the venue didn’t matter. I enjoyed them all.”

“At smaller schools, you get to know more of the kids and more of the community,” he said. “Certainly an advantage Pahrump has is it is a community. At Desert Oasis or Sierra Vista, the town is so big you really don’t get that community-type feeling.”

But Goins has done some things to try and remedy that, including using technology to bring current students and alumni together.

“In the early 2000s, we started webcasting at Sierra Vista, basically a radio broadcast over the web of a lot of our games,” Goins said. “It was amazing some of the feedback you’d get. Kids that had graduated from the school, some were overseas in the armed forces, and I’d get an email saying thanks for webcasting those games.”

If there is a specific event Goins recalls with fondness, it would be the Class 2A State Wrestling Championships in 2001 in Pahrump. Back then, the tournaments were not held in the same place, as each class wrestled at a different venue.

“Just before I left here and went to Las Vegas, we hosted the state wrestling tournament,” he said. “Of all the things that I was involved in, the thing that I took the most pride in was making sure that the events that I hosted were quality events. The thing that motivated me to be in athletics was the experience I had in high school.

“Pahrump Valley had a kid, Neil Cowley, and he had broken his hand in the regional tournament. The gym was packed to the gills. We had the mat light on for the finals, and this kid from Virgin Valley that Neil had battled all year came out and Neil upset him and won the state championship. The gym just went crazy during the match.”

Cowley was the 135-pound champion that year and a 2008 inductee into the Pahrump Valley High School Athletics Hall of Fame, of which Goins was a charter member in 2007. That put him in the unusual position of coming back to the athletic director post in 2016 already a member of the school’s Hall of Fame.

Hayes had come to Pahrump Valley while Goins was at Desert Oasis, and the old/new athletic director made an immediate impression.

“The first thing I noticed when he took over is that everyone knew him and respected him,” Hayes said. “He really did an excellent job coming in and getting our athletic department organized.”

Sometimes the accomplishments were smaller, but important to those affected by change.

“Everything that I set my mind to do, we managed to make happen,” Goins said. “In the rural schools, we had played 18-hole matches for many years, and the Clark County schools played 9-hole matches. So when I went to Clark County in 2001, I told Bob Northridge, the southern coordinator for the NIAA, that was something we had to get changed. He said that would never happen, and that’s when I found out that never takes about three years.”

Being in a school’s hall of fame is a special honor. Being honored at the state level is a very different animal, and Odegard believes it is richly deserved.

“Larry took his passion beyond his own schools and many times advocated to make changes at the state level that benefited students across the state,” Odegard said. “Larry is a past executive director of the Nevada Athletic Directors Association and was instrumental in getting that association started. That association has created a collaborative network among the athletic directors and administrators across the state.

“Larry always stressed to coaches and other administrators the importance of continuing their education to make them better in the position that they held. I have not seen many people that do their job with as much passion and dedication as Larry did.”

That kind of job could be hard to walk away from, but Goins has an answer to that.

“I’ve told a number of people I haven’t really retired,” he said half-jokingly. “I’m just looking for the perfect job, where all the kids are orphans and there are no administrators.

“I’ve always said you do it because of the kids. I don’t think I ever had a problem with a kid that a parent or an administrator wasn’t involved in. If you just leave me with the kids, we’ll find a way to get along. But I worked for some really good administrators, too. In fairness, some great parents out there as well.”

Goins feels athletic directors, especially in Clark County, should be given more responsibility and authority, suggesting that their role below assistant principals that serve as athletic administrators can make the AD little more than a ticket manager. He worries about alignment, firmly believing that Pahrump Valley should be in a league with similar schools with similar programs, such as Moapa Valley, Boulder City and Virgin Valley, not coincidentally traditional rivals for the Trojans.

But while those issues are of concern, they are now for other people to tackle. If they want Goins’ opinions on such matters, they probably would have to head out to Mountain Falls and look for him on the golf course. The onetime golf coach remains very active in youth golf and was the man with the marker at the Pahrump Valley Invitational earlier this year, posting scores as they came in.

Goins can take a great deal of satisfaction in knowing a lot of people are happy that he was on the job as long as he was.

As Odegard put it: “His dedication was not just to do the job, but he went above and beyond, always looking to make things better for students and coaches.”