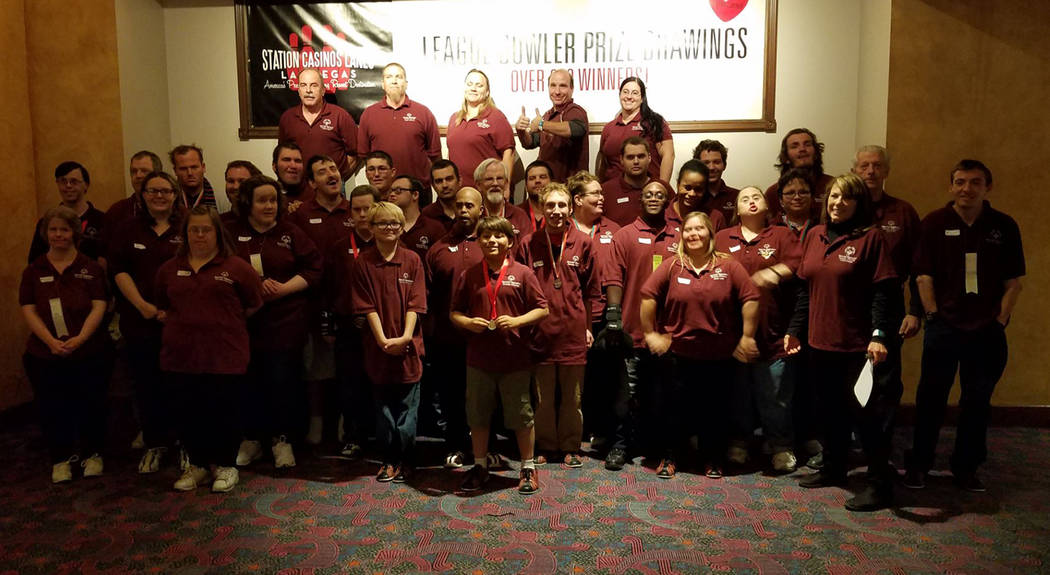 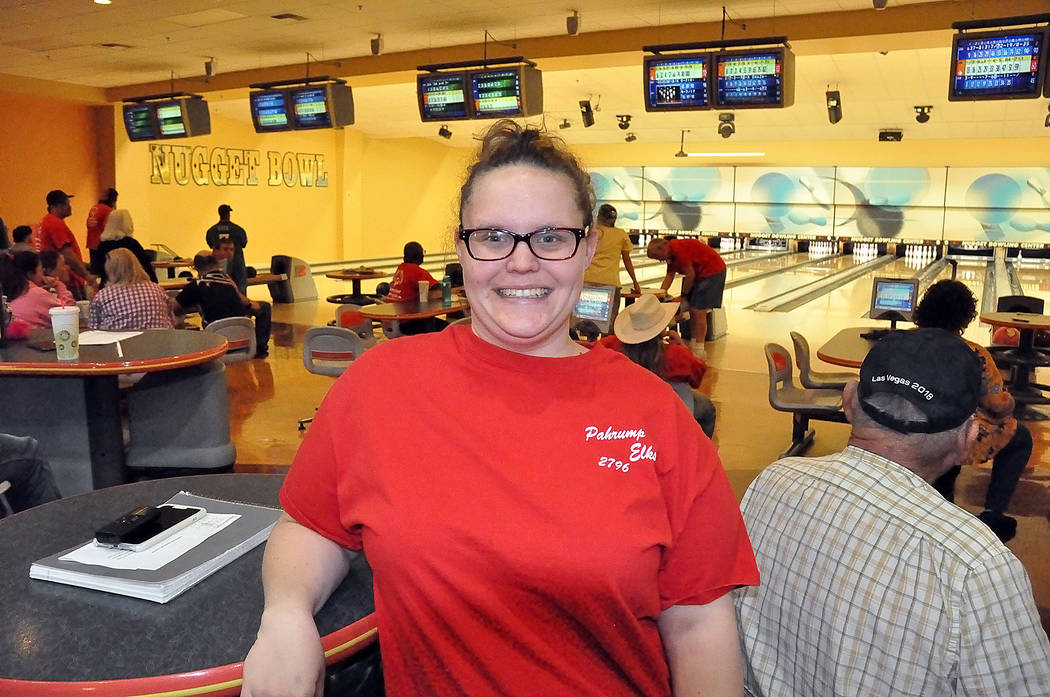 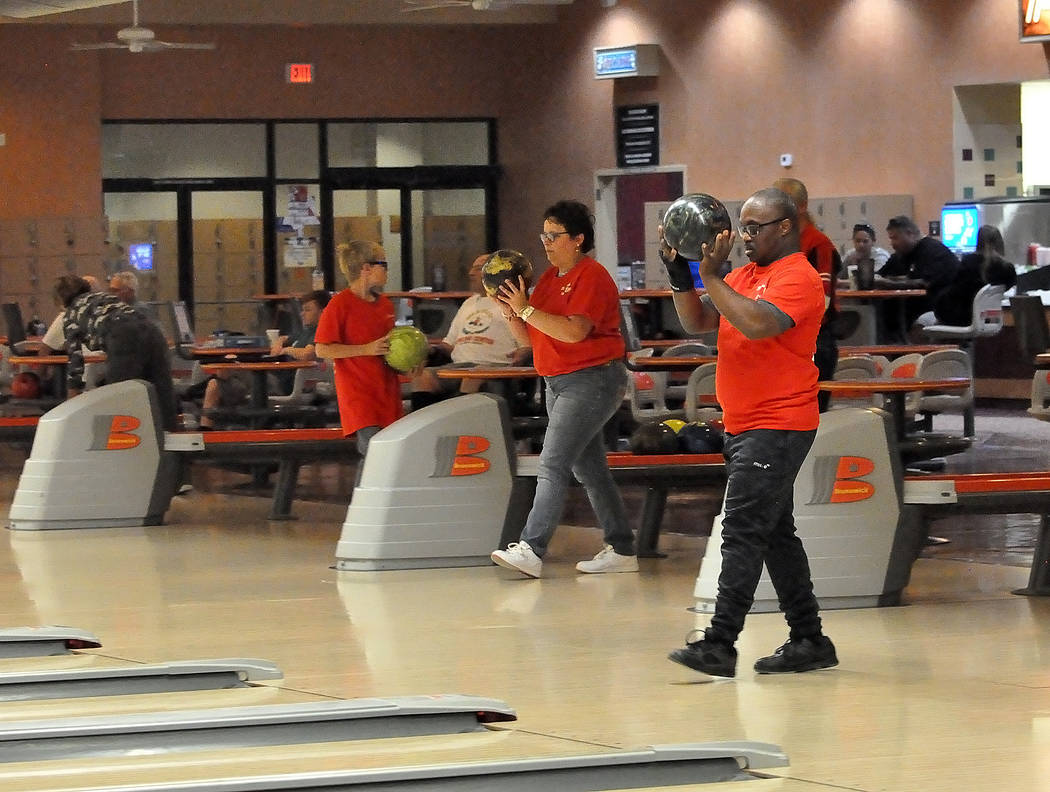 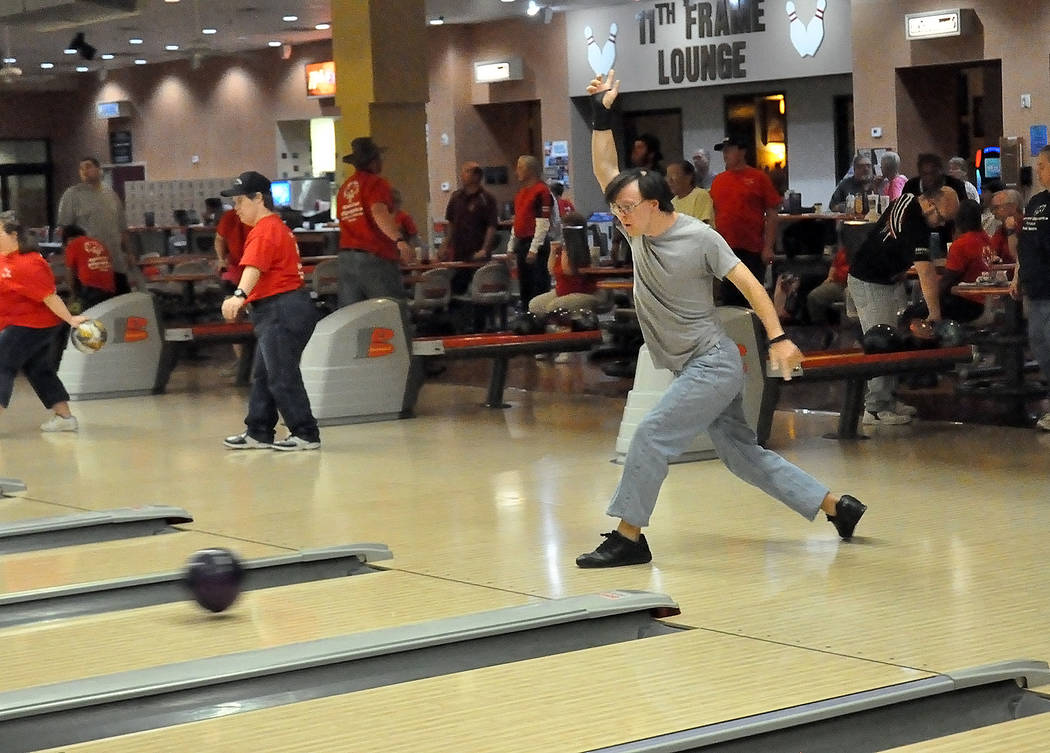 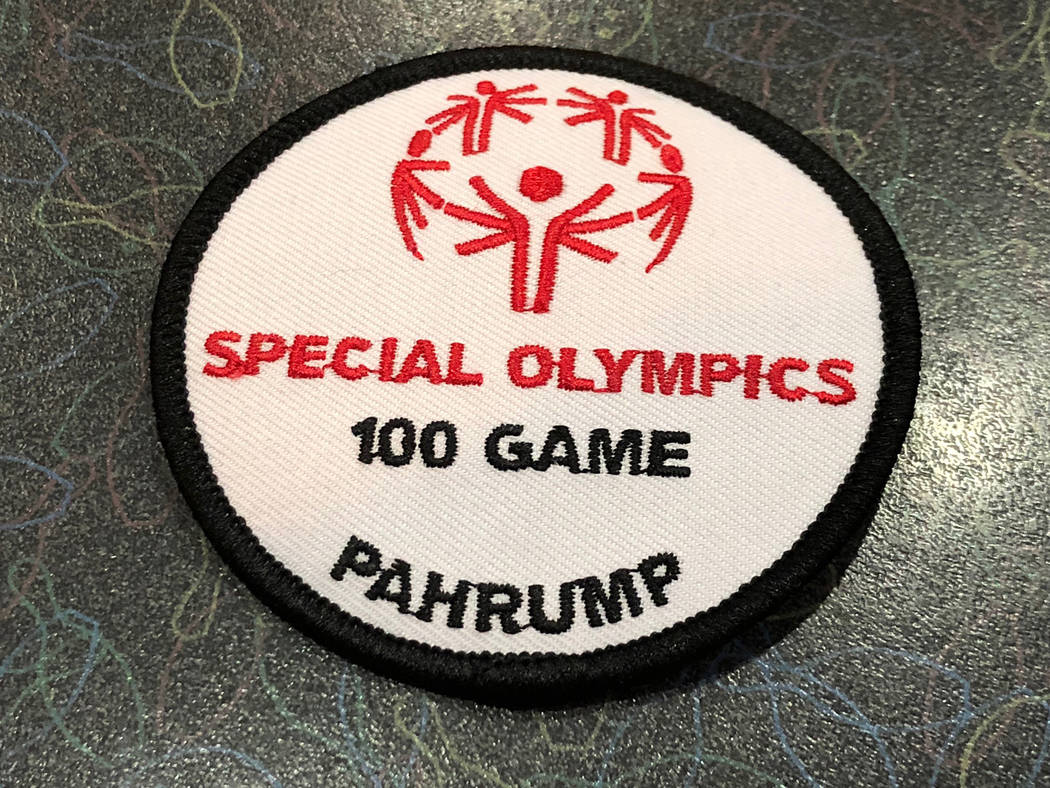 Tom Rysinski/Pahrump Valley Times Coaches award Special Olympics bowlers with a patch to acknowledge 100 games. Bowlers who roll three strikes in a row are given a plush turkey.

Millions of people head to Las Vegas each year, hoping to strike it rich. A group from Pahrump did just that earlier this month, bringing home a huge haul of gold, silver and bronze.

“We left at 6:15 a.m. from the (Pahrump) Nugget, had opening ceremonies and started bowling at 9 a.m.,” said Debbie Brooks, who coaches the bowlers. “In the morning they bowled singles, two games each. They gave them lunch, and in the afternoon they bowled two games of doubles. They pair them up based on their averages.”

It made for a long day.

“It ended about 4:30,” Brooks recalled. “Their biggest comment after was how tired they are. There was a lot of walking involved. It’s a big bowling center.”

But it was all enthusiasm during a Nov. 5 practice session at the Pahrump Nugget Bowling Center.

“I joined Special Olympics about a month ago, and I’m excited to go to regionals,” said Randy Volpe, 29. “I can’t wait. I hope I can do pretty good.”

That was pretty much the theme of the practice, as everyone from kids under 10 to bowlers sporting gray beards prepared for the tournament.

“What we do here is bowl for 10 weeks in preparation for the trip to Las Vegas for the tournament, get them back into the swing of bowling,” assistant coach Bill Santoro said.

While Volpe bowled in his first region tournament, Erin Briskey, 29, is a veteran of the trip to Las Vegas.

“I love to bowl,” she said. “It just makes me happy. And when I get upset I take my frustration out on my bowling ball and I knock pins down.”

A Michigan native, Briskey said 111 is a good game for her. She stumbled upon Special Olympics bowling by accident.

“I saw it in the paper, Special Olympics, I was so excited to join it and I thought it would be something fun to do, to get out and be active,” the fifth-year Special Olympics bowler said.

Being active and sociable are two of the big draws for bowling, one of Special Olympics’ most popular sports.

“I’ve been bowling a long time, a really long time,” Randy Yates said during a break from practice. “I’m a good bowler, and I like going to Vegas. And there are nice people.”

“My best friend bowls here, too,” Volpe said. “I love bowling. I’m average, I just got done bowling a 121. Every chance I get, I’ll come in here and try to bowl, with help from Mom.”

Mom handles the driving for Volpe, who, like Briskey, does not participate in any other sports, although in Nye County basketball, bocce, golf, soccer, softball and track and field are offered.

But little touches make bowling extra special. For example, small rewards are given for accomplishments, whether it’s a patch for rolling a 100 game or even a stuffed animal.

“Three strikes is a turkey, and whenever someone gets three strikes in a row we give out plush turkeys,” Brooks said. “It’s become a big deal.” At the Nov. 5 practice, Michael Nowicki was awarded a plush turkey.

Others are around to help the bowlers, such as the people who run their practice venue and contribute team shirts.

“They are so awesome,” Brooks said of the Pahrump Nugget Bowling Center staff. “I love working with them, and I’m so grateful to all of them.”

“We were fortunate enough that the local Elks lodge was able to donate all of the shirts for the athletes,” Santoro added. “That was really good for us, because it gives them the unity we’re looking for. Everybody’s the same.”

Brooks and Santoro bring a lot of bowling experience to coaching in Special Olympics. Brooks was the co-owner of the Mountain View Casino and Bowl in Pahrump, which was destroyed by fire in 2003. Santoro was Mountain View’s bowling manager.

“I’ve been coaching off and on for 18 years,” Santoro said. “Debbie, who runs this, asked me to join. She got me involved 18 years ago.”

“I bowl three leagues,” Brooks said. “Some of the coaches are bowlers, and that’s really helpful.”

With experienced coaches and local support, Special Olympics bowling was primed for success.

“We had a wonderful season, and a lot of the bowlers are improving each year,” Brooks said. “My favorite part is watching when they do well.”

Brooks must have enjoyed the trip to Texas Station, as her bowlers brought back a whopping 38 medals: 17 gold, 11 silver and 10 bronze between singles and doubles.

“We had 200 bowlers at the tournament,” Brooks said. “There were teams from Mesquite, Pahrump and a couple from Las Vegas. “We had a lot of first-time bowlers that did great.”