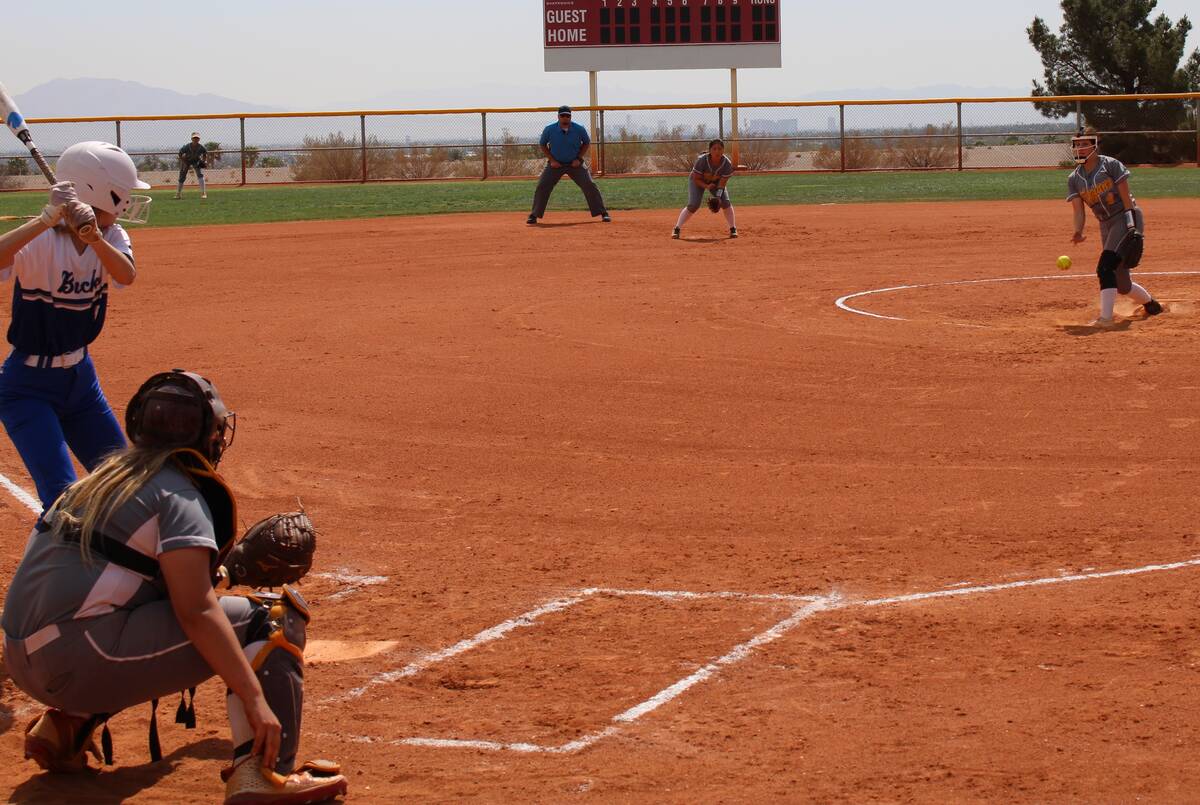 The Pahrump Valley softball team, along with 24 other schools, is participating in a softball tournament in Las Vegas.

While most schools participating are from around Nevada, there are schools representing California, Arizona and Utah.

The teams are split into eight groups. Groups 1-7 will all have three teams, while group 8, Pahrump’s group, will have four teams.

Over the course of the three-day tournament, the Trojans will play in five games. They’ll play in two games on Thursday, two games on Friday and finish with one game on Saturday.

Pahrump Valley kicked off their tournament with a rough game against the Lowry Buckaroos.

The “Bucks” came into the tournament winners in 10 of their last 11 games. Their lone loss was a 5-4 defeat at the hands of Elko.

The Trojans were looking good early. DeAnna Egan led off the game with a triple to deep right field. She would come in to score on an RBI double by Ciara Stragand.

Unfortunately, that would be the only offense the Trojans would be able to muster up in the game against the Buckaroos.

Stragand got the start on the mound for the Trojans and was attacked quickly by the Lowry bats. She only lasted 1/3 of an inning, giving up seven runs on five hits in the first inning.

She was replaced by Cat Sandaval, who had a rough time of her own against the Buckaroos. Sandaval pitched the remainder of the game, going two innings while giving up nine runs on eight hits.

The game was called in the bottom of the third inning due to the run rule. The Buckaroos came away victorious by a score of 16-1.

As I’m sitting in the Majestic Park parking lot writing this, the Trojans are currently warming up to face their second opponent of the day, the Winslow (Arizona) Bulldogs.

Winslow enters the tournament with a 16-5 record on the season and just had a 10-game win streak snapped earlier this week.

Pahrump Valley will continue their tournament Friday morning with a game against Palo Verde High School. First pitch for that game is scheduled for 9 a.m.

The Trojans will have a second game on Friday, however, the start time is to be determined on how they play in their second and third tournament games.

Their final placement within their division will dictate what time their fourth (Friday) and fifth (Saturday) games will be played.

If you’re in the Vegas area Friday or Saturday, and you’re a fan of softball, it would be worth your time to head over to Majestic Park to check out the games.