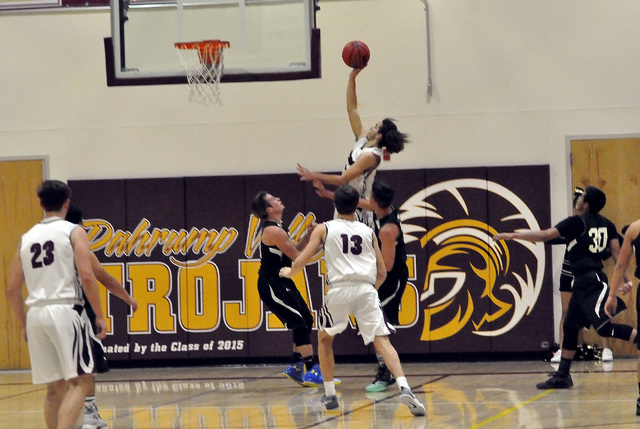 David Sidhu goes up for a basket against Beatty last Tuesday night. It was a blast from the past as the two schools who once battled on a more regular basis renewed the old rivalry in Pahrump. Horace Langford Jr. / Pahrump Valley Times 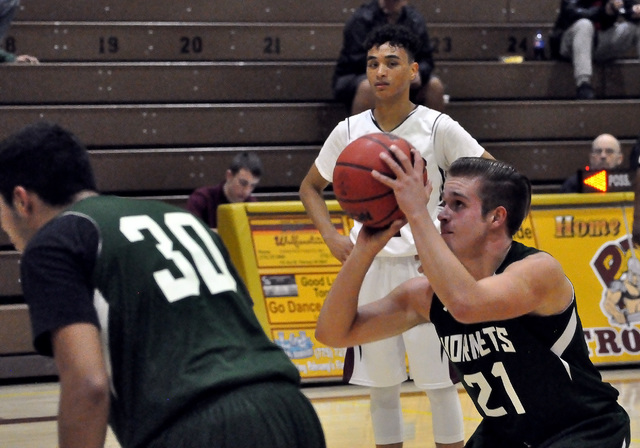 Robby Revert takes a shot at the free-throw line for Beatty. Revert was the leading scorer for the Hornets with 11 points. Horace Langford Jr. / Pahrump Valley Times

Tuesday night’s game with Beatty was a blast from the past for some native Pahrumpians who remembered the days when the Hornets played Pahrump on a regular basis.

According to Trojans athletic director Larry Goins, you would have to go back to the late 1980’s and 1990’s to find Pahrump and Beatty in the same league.

But he did say the two teams still met on a regular basis for a long time.

“I remember we played them a lot and I graduated from high school in 2005,” he said.

The Trojans basketball team couldn’t afford to stay idle this week and so they took on their neighbor to the north, Beatty, even though Pahrump outsized them.

Clark County School District didn’t schedule any games for the week following the Martin Luther King holiday due to testing, and this made it difficult for the Nye County School District teams, who wanted to stay sharp. This led to the Trojans playing Beatty (8-4, 1-1 Class 1A Southern) in what used to be a regular occurrence.

Both schools are in highly competitive leagues. Beatty is trying to keep up with Spring Mountain and Pahranagat Valley and Pahrump (6-14, 0-4) is trying to just keep its head above water in the Class 3A Sunset League

Antonio Fortin, who scored 19 points, led the Trojans. Fortin frustrated Beatty with his uncanny ability to make his way to the basket. He also had a pair of three-point shots late in the game.

Also contributing to the scoring was David Sidhu with 10, and Nick Harris, who had nine.

The Trojans starters were able to keep Beatty down, leading at the half, 33-20.

Robby Revert led the Hornets with 11 points. Beatty did outscore the Trojans in the fourth quarter 9-8.

Jacob Oseguera had eight points and Isaias Femat and Matt Reetz both had six points.