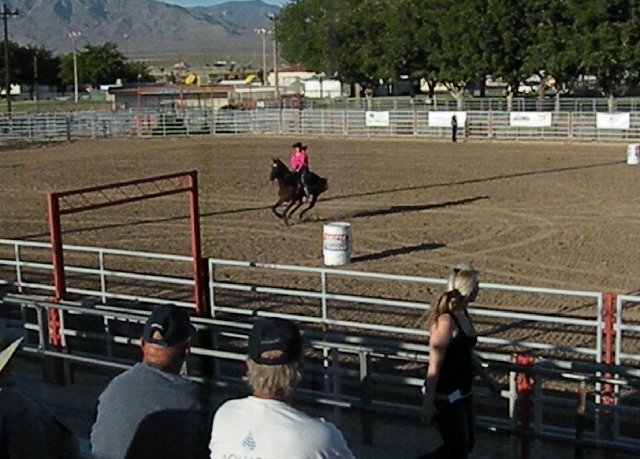 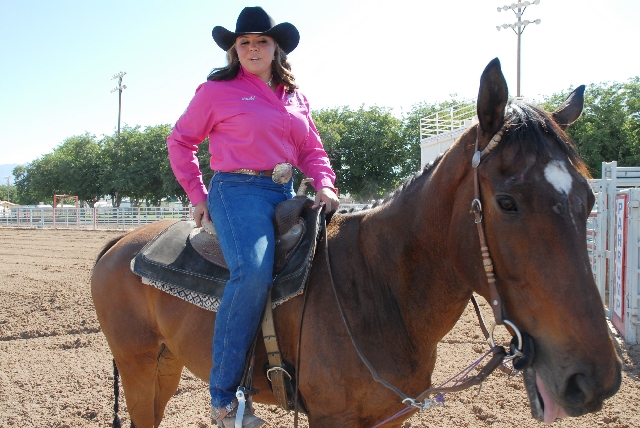 Dusty Simmers grew up with rodeos all her life. She is a cowgirl from Alamo. She came to Pahrump to open a thoroughbred race horse rescue for retired race track horses.

The national contest has 12 trainers, each trying to train a thoroughbred racehorse to barrel race.

Simmers is halfway through the process and just entered her horse Busted in his first rodeo in Pahrump.

Prior to the rodeo, the PVT caught up with Simmers at the McCullough Arena during a training session.

“I don’t want to work him too hard,” she said. “Next weekend will be his first time out and all I want is a clean smooth run. I have run in this arena for a bit and my fastest time was an 18. If he does that I am packing him up and hitting the road. He is not quite there yet. He has to learn to take the barrels at a fast speed. He is blowing us away with how fast he is learning. With most horses, it takes three months and he has done a lot in that time.

“He is quite fun. Busted likes going fast and the faster you let him go, he is happier.”

Local barrel race trainer Robin Roberts is helping Simmers and giving her advice on Busted. She agrees the horse has talent for his size. He comes in at 16 hands.

“Every once in a while you will see a big horse that will just blow others away. He is a very athletic horse. He has some natural talent and he might just make a good barrel racing horse. Most horses like this are long- strided and these horses are good for jumping. He has a fantastic disposition. Busted has shown some talent toward barrel racing,” she said.

In the rodeo on Saturday, Simmers entered another horse besides Busted. Her aim was to compare the two and evaluate both before traveling.

On the road, she plans on hitting as many rodeos as possible to earn money for her contest and to train Busted further.

After the rodeo, she said she feels her horse is doing well.

“As for Busted, I am extremely proud of him,” she remarked. “He works really well. I was afraid he wasn’t going to work right. He felt off in the arena. I really think in another month we will be doing really well. I wanted a clean smooth run off him and we got that. He had never been to a rodeo before. A rodeo is different than a racetrack. There are different sounds, there are different kind of animals, there different people, it’s a different environment than he is used to. With a new horse you never know what to expect and never know how they are going to do. He did excellent for his very first rodeo ever.”

Busted came out a little slow in the barrel race but sprinted home fast. Some watching the rodeo said he did not hug the barrels closely.

“He should never be hugging those barrels like the quarter horses you see there. They are way shorter than Busted is. The bigger horses you have to give them more room around the barrel, so that they can get around it smoother and faster. If I was trying to make Busted go around them like the smaller horses, as tight as the smaller horses, that would slow him down more. You have to give him room and let him move with his size.”

Busted is doing so well at his new job that all thoughts of selling the horse after the contest are out the window, at least for the present.

“I definitely think I will keep going with Busted,” the cowgirl said. “Other girls are going to be putting their horses up for sale after the makeover. Unless somebody offered me a lot of money, I will keep him around a bit and see what he can do. He has a lot of want and a lot of stride. He is learning quick and training hard. It is just a matter of him getting used to doing his job.”

On the barrel race Busted finished in last with a time of 20.9 seconds. The other riders were finishing around 19 seconds, but Simmers believes Busted can do it.

“Once he gets the long stride figured out between the barrel he will be fine. Just when he gets up to speed he has to shut back down again to make the turn. It is just a matter of figuring out what is comfortable for him, once he gets all that down he will make up time coming home for sure,” she said.

Dusty is still looking for a rodeo sponsor for her short tour coming up. In about two weeks, she will be leaving for Ohio. She will be traveling with Busted through Idaho and Wyoming and hitting all the rodeos she can before July 23 where she will arrive in Ohio for a horse clinic and the final leg of the contest. In Ohio, Busted will be judged on his new job as a barrel racer.

Simmers has the possibility of winning some prizes and around $2,000 if she takes the grand prize.

“It will be a challenge but it’s fun and it will be worth it for sure. It was cool to go up to the stands after the rodeo and still hear people talking about him,” she said.