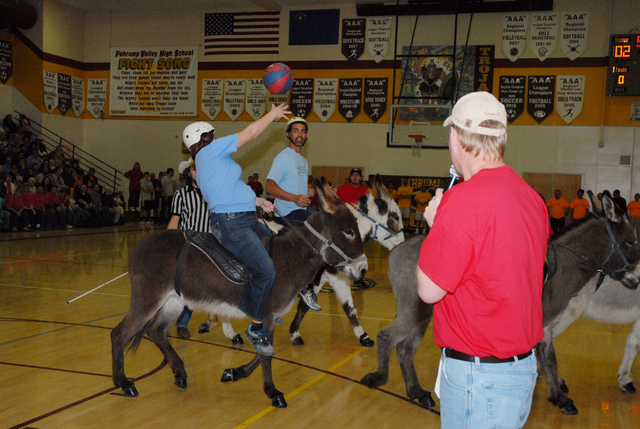 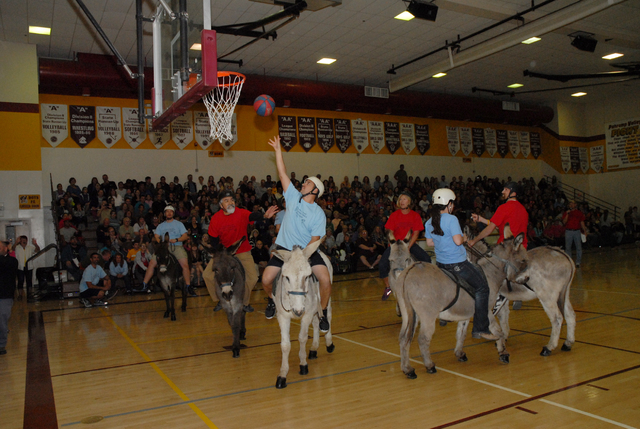 Donkey basketball fever came to the valley on Friday evening as people filled the Pahrump Valley High School gym to capacity for the second annual game.

The successful fundraiser was started last year by Rosemary Clarke Middle School Principal, Tim Wombaker, to raise money for a special fund for his students that pays for incentives and rewards for those who do well with grades, testing and attendance. During the school year, students have an opportunity to earn bikes or win a trip to the Nugget Bowling Alley or Treasure RV, to name a few.

The game was well received as the crowd erupted with laughter. Mom’s Diner owner, Larry Chumley, had a great time.

“It was really cool. The donkeys pretty much do what they want to do and you can’t leave your donkey. If you have to go get the ball on the floor, you have to take your donkey with you. There was a spunky donkey that would take off running and then all of a sudden it would just put on the brakes and just stop and the rider would just go right over its head and land on the floor. It is a family event all the way from tiny kids up to old people having a ball, laughing and roaring.

When asked if Mom’s would contribute to the business team next year Chumley replied, “We are thinking of it and no, I am not riding the stupid donkey, but yeah, if we can find someone dumb enough to ride.”

The winner of the tourney was the PVHS staff team who beat the business team in the finals.

This year the event received a bit more negative attention when the People for the Ethical Treatment of Animals made some noise. Gemma Vaughan, an animal cruelty case worker from PETA in Virginia, said PETA was alerted to this event by concerned local residents.

“Because of the close proximity of time in which they informed us of the event we asked members to contact both the school administrators and city officials.

Wombaker told Channel 8 News that he received more than 300 e-mails and phone calls about the fundraiser.

PETA wants the school to replace the event with a humane alternative like dodge ball, which Vaughan said other schools in the country have switched to.

“Our stance is it is not OK to abuse animals in order to to raise funds. Donkeys used in these events are exposed to general chaos, the screaming crowd, all of which is extremely stressful to these animals. They are also exposed to the additional trauma of being jumped on, pulled on, kicked and shoved by people who have no experience with these animals,” Vaughan said.

Norton said he would have had to allow PETA on campus. “Believe me I looked hard at the law to find something, but could not,” he said.

Not a single protester showed up to the game.