By Jazmyne Turner and Zarah Whittle Special to the Pahrump Valley Times
September 23, 2017 - 5:56 am 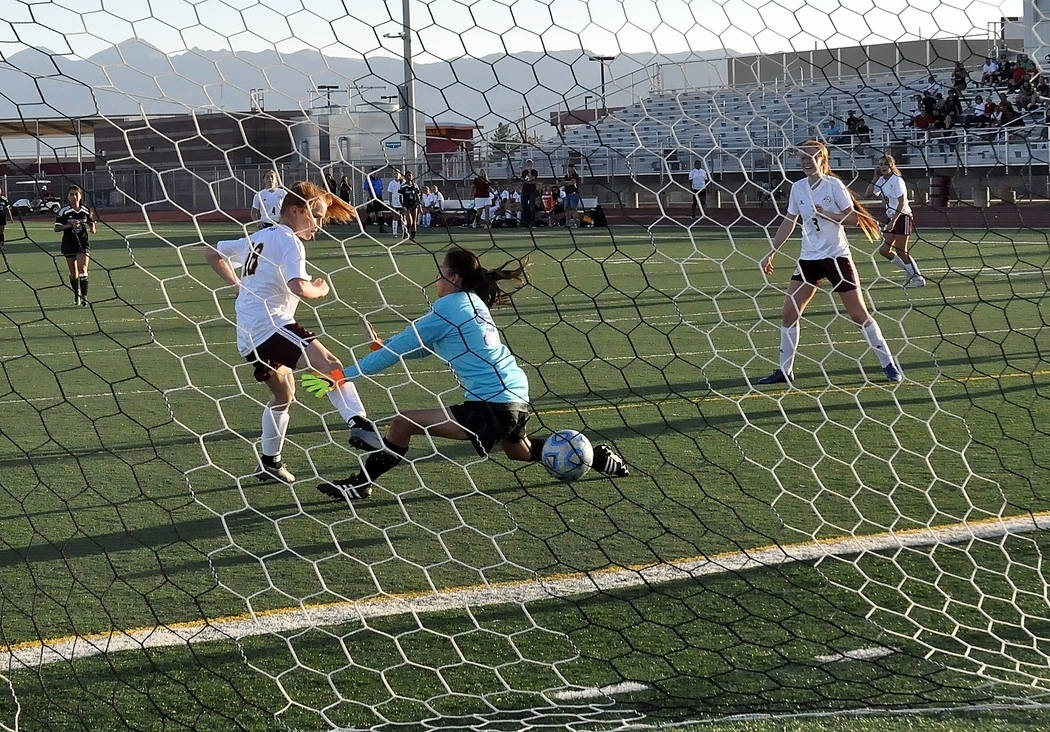 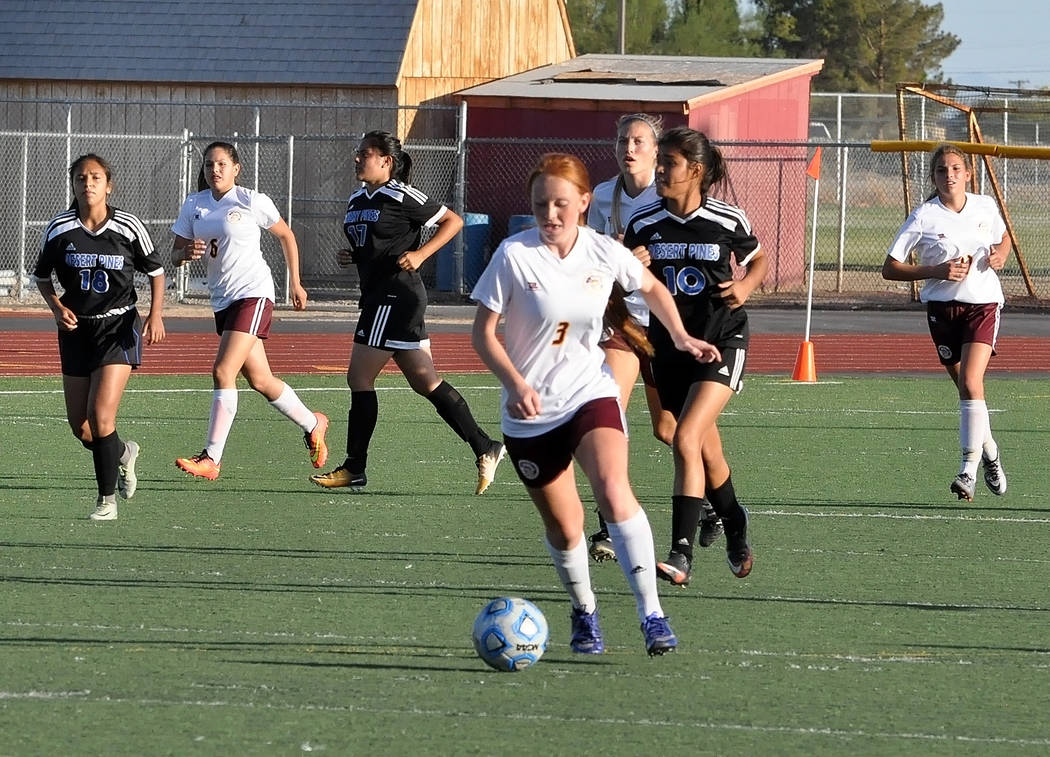 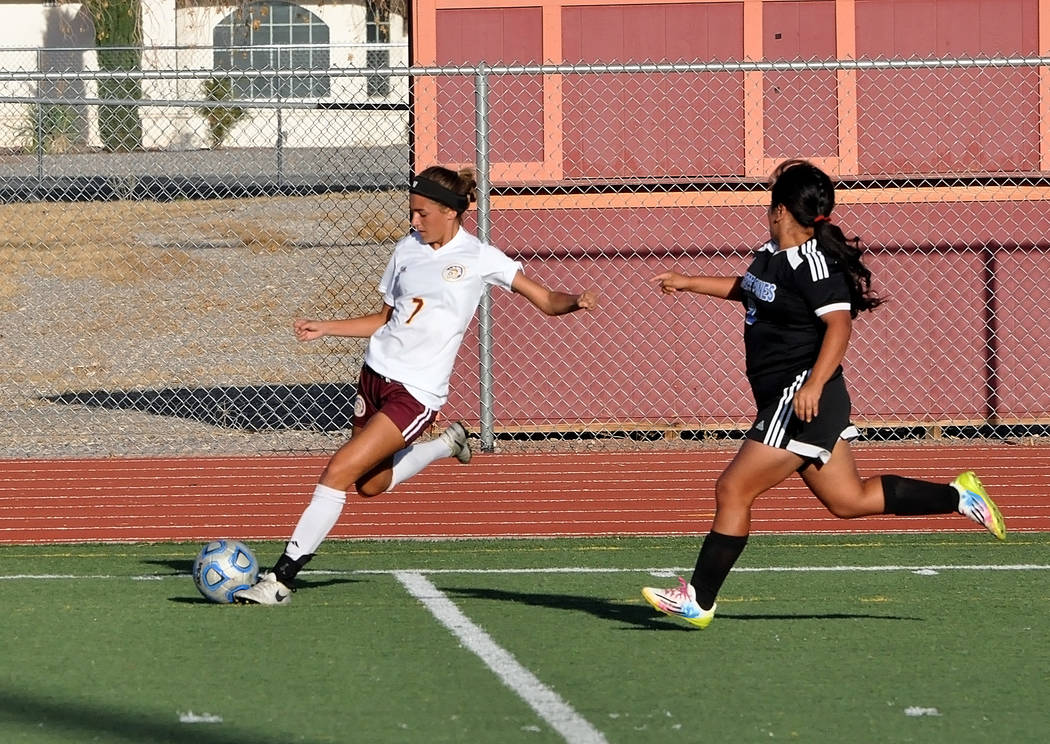 Horace Langford Jr./Pahrump Valley Times Vaniah Vitto gets off a good pass against Desert Pines. The Jaguars only had one shot on goal against Pahrump. 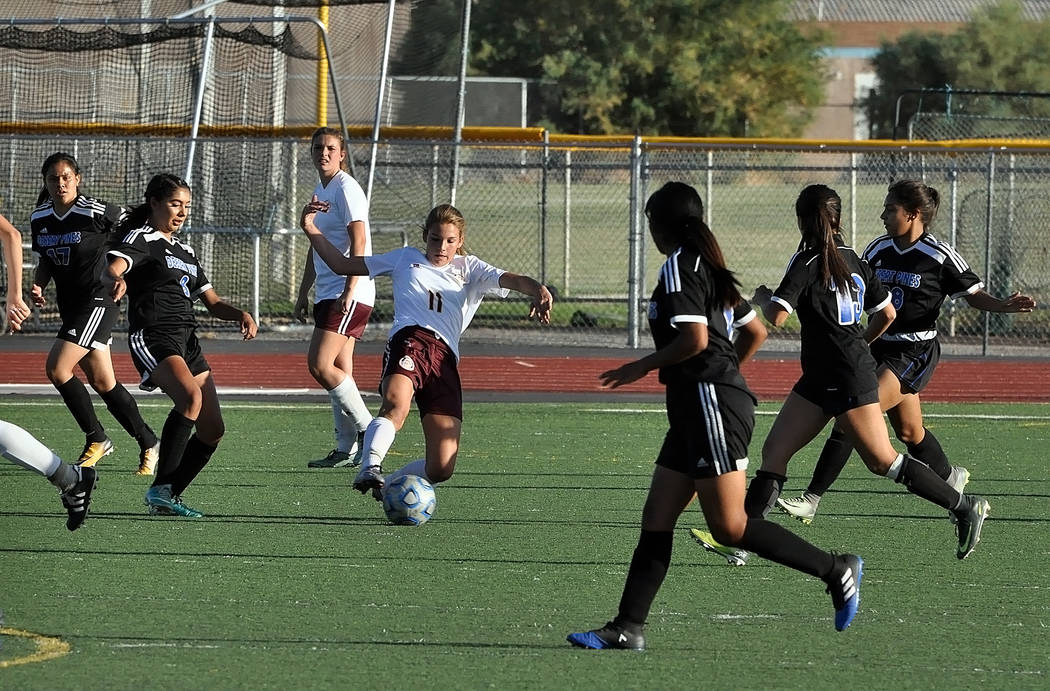 The game was called due to the mercy rule 20 minutes into the second half as prescribed by the rule. Pahrump Valley (8-2-2 overall, 2-0-1 Sunset League) scored five goals in that 20 minutes of play to end the game.

Senior Kaitlyn Carrington scored twice in the first 10 minutes of the game. In her second score, she dribbled the ball from midfield and through the legs of the last defender to score. She was the top scorer for Pahrump and the game, scoring five goals.

“This was the best positioning and finishing all year,” Carrington said. “It feels like we are finally working as a team.”

Sydney Dennis was next, and like Carrington, scored one goal and then quickly scored another within two minutes. She had two on the night.

Makayla Gent finished up the half with three goals. She scored the first two goals within five minutes of each other and then senior holding-mid Kathy Niles scored a goal off a corner kick.

At the end of the half, Gent dribbled half the field around three defenders and beat the goalkeeper to the far side of the goal for a score.

Vaniah Vitto had a goal also in the first half.

The first 10 minutes of the second half was owned by Niles, who scored two goals in that time. One of her shots was from her left foot into the right corner, 20 meters away at an extreme angle.

Niles said the win was a team effort.

“We trusted ourselves more, and instead of taking a bad pass, we took the better option and scored,” Niles said. “Today we had better passes to feet, more communication, and better stepping in defense, which led to better coverage. This was a total team effort.”

Carrington then scored her final goal of the night. She was followed by Angelica Garcia and Madelyn Souza, who had one goal apiece.

Desert Pines only had one shot on goal right at keeper Alyvia Briscoe. The Trojans dominated the time of possession and the ball barely made it past midfield for Desert Pines.

Trojans head coach Julie Carrington said it was the best game they had played up to this point.

“Our girls played phenomenal positionally, and I think this was our best game of the year,” she said. “Not because of the score, but because of the camaraderie that I’ve been striving for. We worked together as a total team effort.”