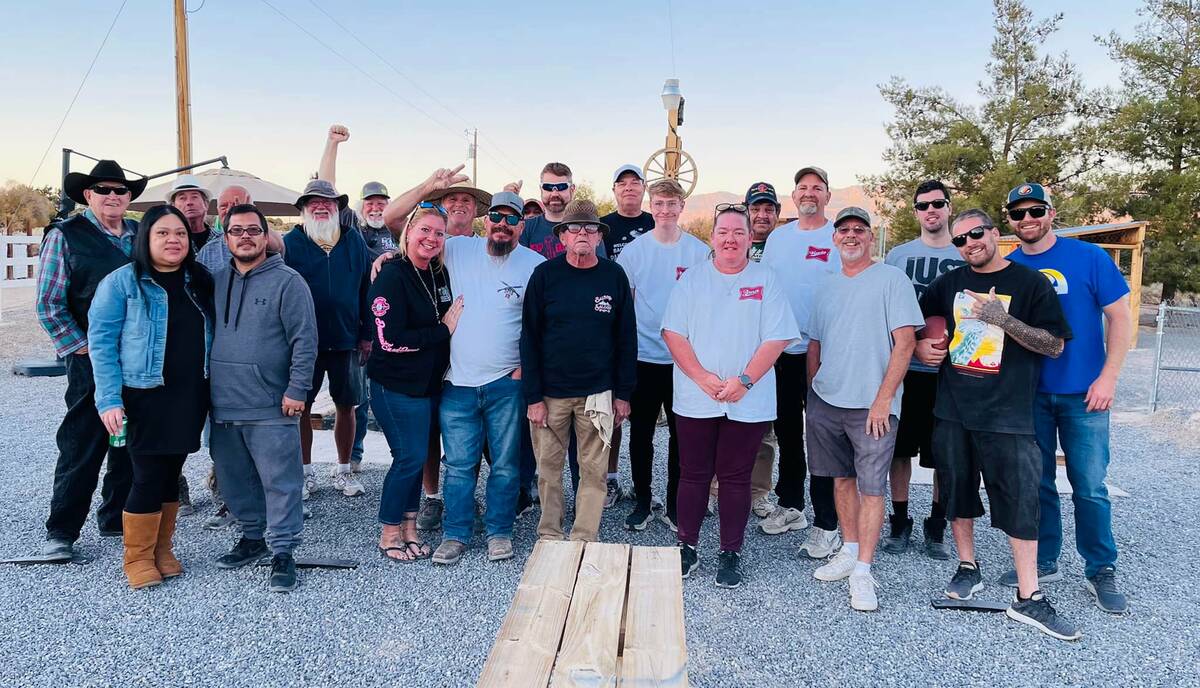 Lathan Dilger/Special to the Pahrump Valley Times. Participants for the Shoes & Brews series gather for a group picture before the tournament starts on 11/21.

On Sunday, Nov. 21, the Shoes &Brews series picked back up at DJ’s Ranch Saloon in Pahrump. This tournament was a doubles, round-robin style tournament, meaning every team played each other once.

There was only one group for this tournament and it consisted of nine teams combined of A class and B class players.

There was a three-way tie for first place in the tournament. The tiebreaker was settled via a playoff game.

All three teams flipped a horseshoe to see who was going to get a first-round bye and which teams would play each other in the first round.

The team of Kasey Dilger and Kevin Chael received a bye in the first round. This meant that the team of Randy Salzwimmer and Chuck Smith would play the team of Mark Kaczmarek and Sonny Zuloaga.

Salzwimmer and Smith were victorious and moved on to the second round to face Dilger and Chael for the championship. With their loss, Kaczmarek and Zuloaga were deemed the third-place team.

In the playoff championship, Dilger and Chael came away with the win and were tournament champions. For their first-place finish, each player was awarded a plaque, a cash prize and ten points in the series standings.

On Saturday, Nov. 27, the final tournament was held for the Nevada State Horseshoe Pitching Association. This tournament was the inaugural NSHPA Turkey Toss.

In the A class, Jim Hatch of Pahrump took first place. For his win, Hatch received the Tournament Champion patch for coming in first place of the top class and he received a cash prize.

Second place in the A class went to Kasey Dilger of Incline Village and the third-place finisher was Dennis Anderson of Pahrump. Each of them received a cash prize for their places in the tournament.

In the B class, 93-year-old Fred Kennedy of Summerlin, took first place. He received a class champion patch and a cash prize for his win.

There was a three-way tie for second place in the B class between Larry Workman Sr., Lathan Dilger and Larry Workman Jr. The tiebreaker came down to how many ringers each pitcher got.

Workman Sr. finished with 63 ringers, which was the most between the three pitchers, so he took second place in the B class. Dilger was just barely able to edge out Workman Jr., 54 to 53 ringers, for the third and final cash prize spot of the tournament.

There is only one tournament left in the Southern Nevada Horseshoe Pitching Association and the Shoes &Brews series. The last event for the SNHPA will be the Christmas Party in the Park at the Petrack Park horseshoe pits on Saturday, Dec. 11. The final Shoes &Brews series event will be held at Tatuado Wild Side Tavern on Sunday, Dec. 12.