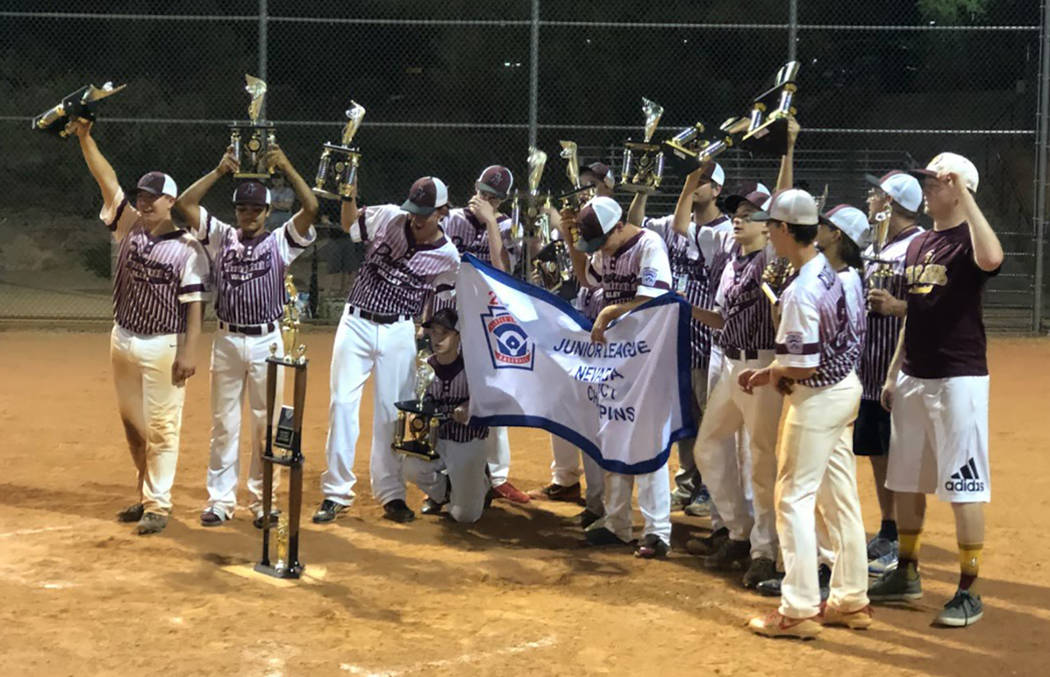 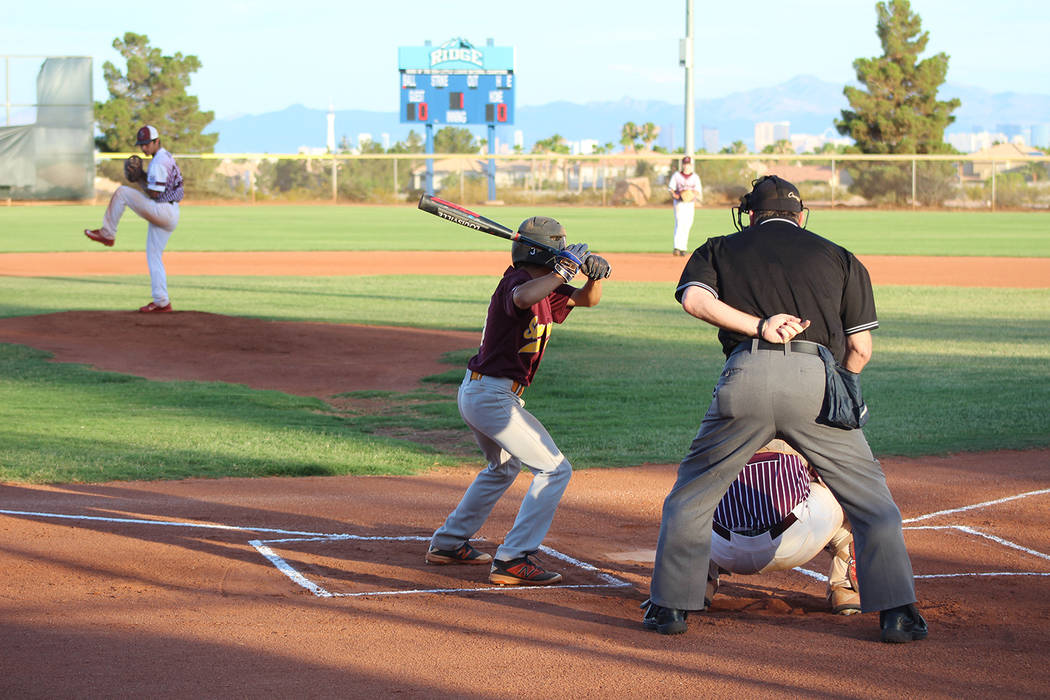 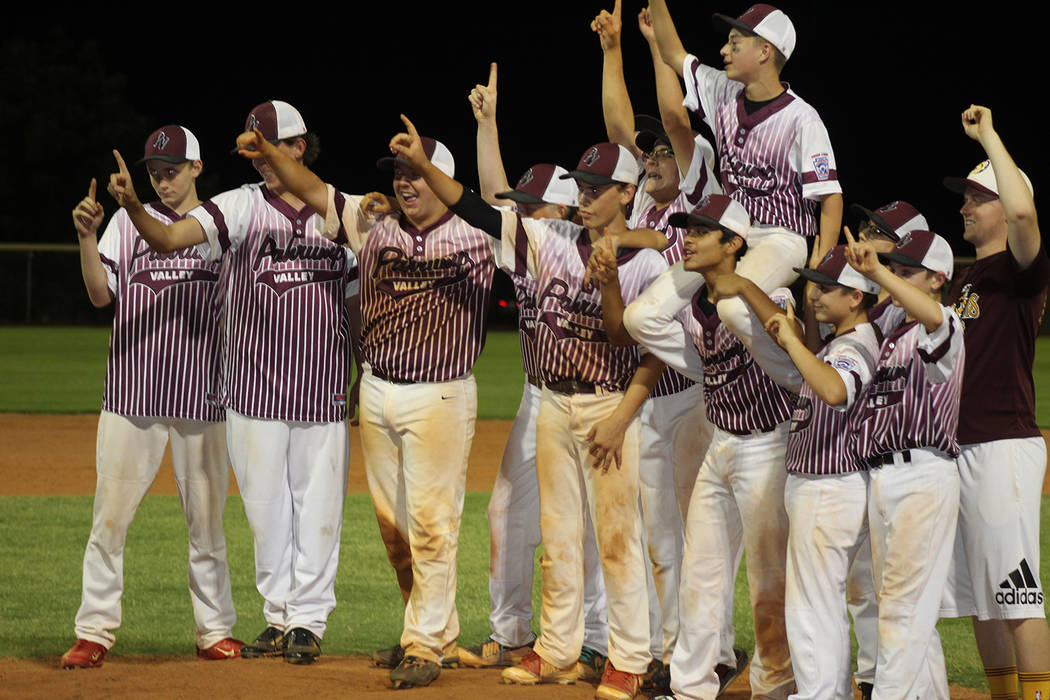 Tom Rysinski/Pahrump Valley Times Mason Prunchak gets a ride from Jay Amaya while Pahrump Little Leaguers let everyone know who is No. 1 in District 4 after a 9-8 win over Summerlin North at Mountain Ridge Park in Las Vegas. 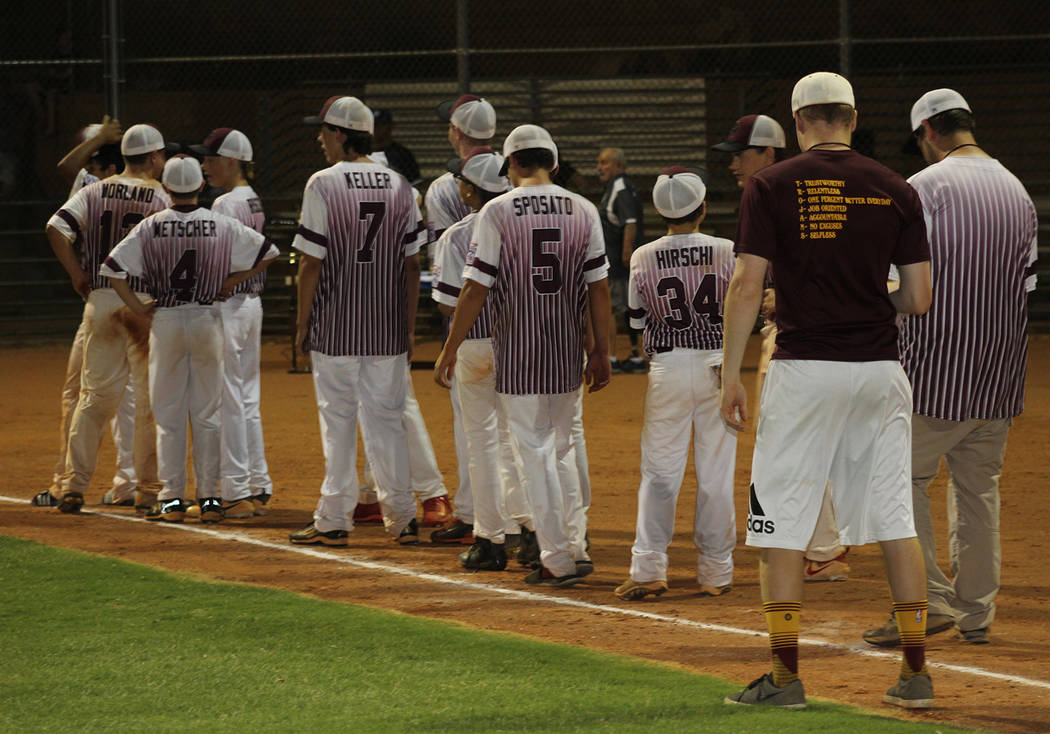 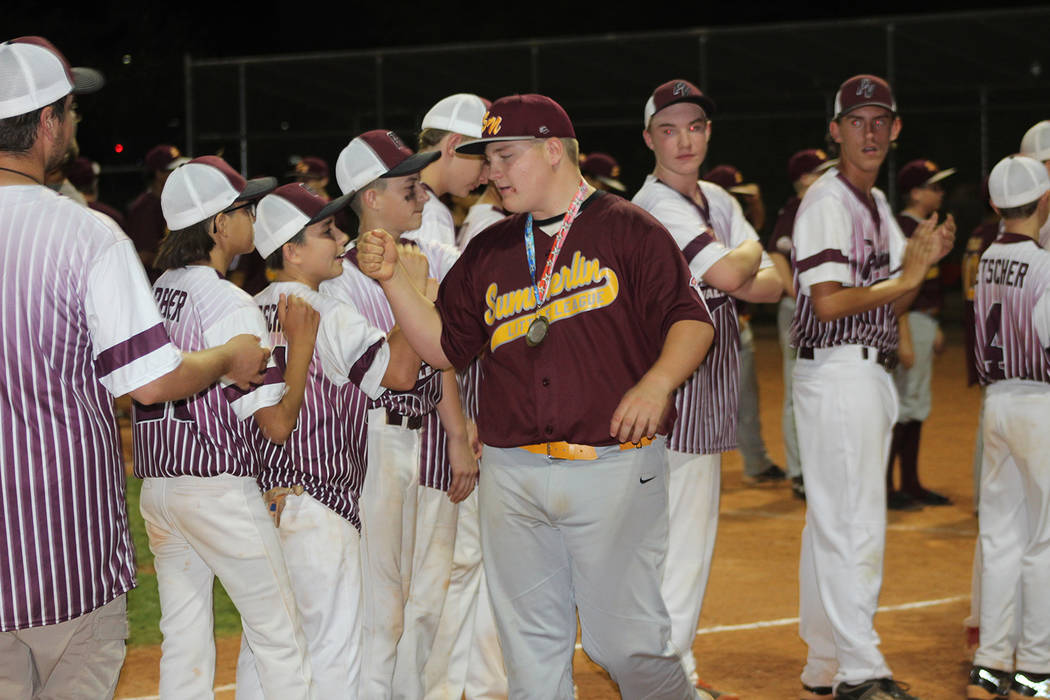 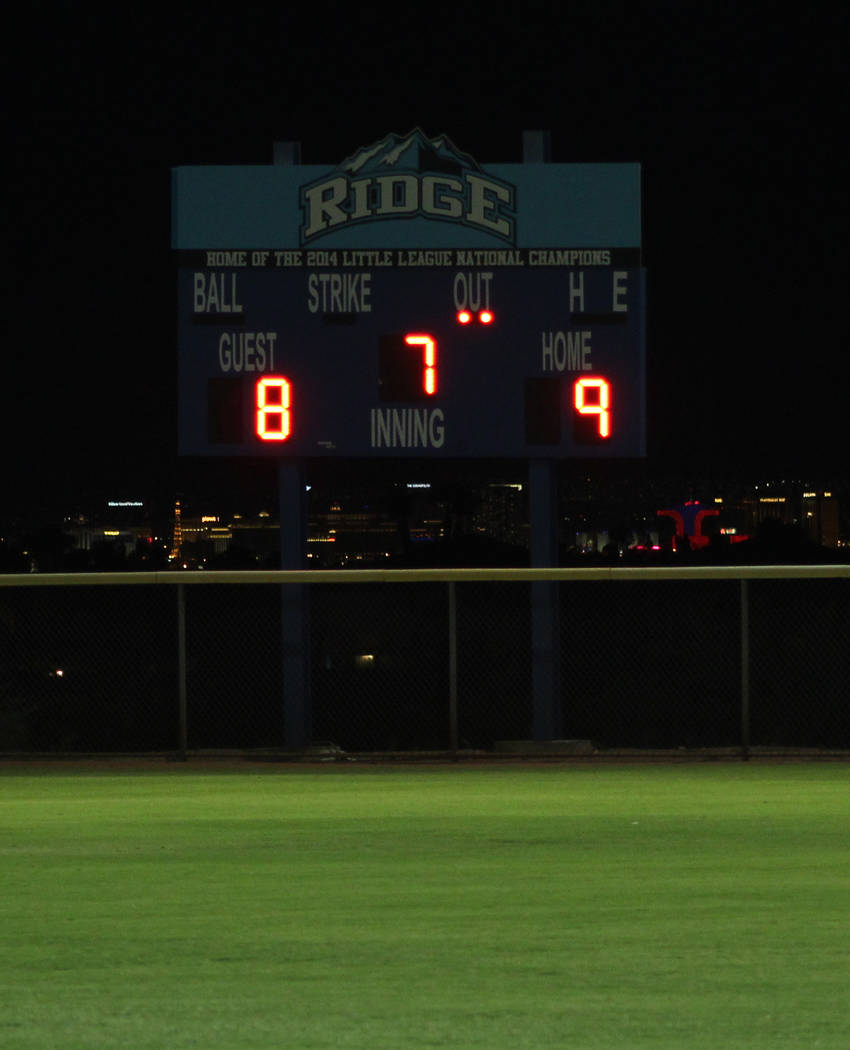 It wasn’t always pretty, but when it was over, the scoreboard was a beautiful sight to anyone connected to Pahrump baseball.

Scott Hirschi laced a bases-loaded single up the middle in the bottom of the seventh inning to lift P-Town Little League Junior All-Stars to a wild 9-8 victory over Summerlin North in the District 4 championship Wednesday night at Mountain Ridge Park in Las Vegas.

“Scott Hirschi had one hell of an at-bat,” Pahrump manager Drew Middleton said. “He falls behind 0-2 and fouls off eight straight pitches before he finally hits one out to center.”

It was a dramatic ending to a tournament that had only three teams in it, and P-Town’s entry never even played one of them. Summerlin North beat Mountain Ridge in the opener, then, after losing to Pahrump in an epic 12-inning affair the second day, eliminated Mountain Ridge on Monday for the right to play in the championship.

That 12-inning game was rougher on some players than others. Both teams used the same catcher for all 12 innings, something that, despite the humidity, didn’t faze Pahrump’s Dalton Norland one bit.

“My mom grew up as a softball catcher, and I’ve been playing catcher since I was seven,” said Norland, a four-year all-star. “You’re always active, you’re always in the play, and I love the pressure of it.

“It’s just the pleasure of being on a team, seeing the team pumped up. It keeps me alive, and I love it.”

There would be more pressure, and, eventually, more pleasure, to come. With a win over Summerlin North already under its belt, P-Town could have ended things Tuesday and scored six runs on just one hit to take a 6-1 lead after four innings. But a three-run fifth and four runs on only one hit in the sixth for Summerlin North led to a potentially devastating 8-6 defeat, forcing a decisive game Wednesday.

That game started much the way Tuesday night’s ended, as two walks, two errors, a rare catcher’s interference call and a single that eluded an infielder led to a quick 4-0 Summerlin North lead in the first. But Pahrump was on the other end in the bottom of the inning, using three errors, and infield hit and a wild pitch to get three runs back. A walk, a steal and two ground balls made it a 5-3 game in the second.

That’s when Jay Amaya stepped up. Shaking off the bizarre first inning, Amaya settled into a terrific groove over the next four, allowing only two hits and two walks. He also erased one of the hits with a nice pickoff move to first in the third.

“That’s the best I’ve seen him look pretty much all year,” Middleton said. “He had a very good Little League season and then got a rib injury and missed three straight weeks. He only touched the ball three times on the mound since, and he’s been shaky.

“Tonight I told him, ‘I know we haven’t gotten much work in for you, but you get the baseball tonight. Settle down, work your game,’ and he did it. Jay did a great job on the mound tonight.”

“We just concentrated on what the coaches taught us,” Amaya said. “We just work hard and keep focus, and we don’t stop until we’re finished.”

Amaya took the same approach to the plate. After getting two of P-Town’s four hits Tuesday night — including a two-run double — he started a go-ahead rally with a booming one-out triple over the right fielder’s head in the fifth.

“I just wanted to do what I could for the team,” Amaya said. “I told everyone to keep their heads up, we can do this. If you keep on working hard, good things will happen.”

Suddenly, a team that had managed just three infield hits through four innings after getting only four hits the night before started driving the ball. Dalton Norland launched a fly ball that the center fielder dropped, scoring Amaya. Louis Sposato belted a double into the gap in right-center to bring home Norland. Chris Briscoe singled, and one out later, Talan Brown reached on an infield single, but the late throw from short sailed high, allowing Briscoe to score. Zack Cuellar then hit a pop-fly double toward left-center that scored James Metscher, running for Brown, to cap the five-run rally.

“That’s been my whole message: Put the ball in play,” Middleton said. “Saturday, we had 17 strikeouts. Last night, we had 15. First four innings tonight we had eight strikeouts.”

Not one P-Town batter struck out the rest of the way.

“That’s the difference,” Middleton said. “That’s what the game of baseball is, adjustments. We weren’t making that adjustment. We were trying too hard. The last two innings we settled down, took a deep breath and played our baseball. We took the ball where it was pitched.”

A throwing error allowed a run to score in the sixth, but P-Town still owned an 8-6 lead with three outs to go. And then …

“We go into the fifth inning last night and we’re up five runs, and then we’re down and we don’t battle back,” Middleton said. “Tonight, we had a two-run lead with two outs and two strikes, and the kid belts one to the fence. Next pitch, line drive to left, then another, and we give up the lead. It was like last night all over again. Very easily, we could have shut down and given up, but we didn’t. We put baseballs in play and made things happen.”

The team that could have been crushed after blowing a five-run lead Tuesday night, digging an early hole for itself Wednesday night and then, after taking a lead, watching Summerlin North put on a two-out rally in the seventh to tie it, was not letting another one go to extra innings.

Not that it was easy. Briscoe led off by getting hit by a pitch. Leo Finkler, who had pitched well Tuesday before tiring but had struggled mightily at the plate against Summerlin North, came through with a clutch single, and both runners advanced on a wild pitch.

But the next two batters were retired before Metscher drew a walk to load the bases and set up Hirschi’s heroics and send P-Town Little League into the state tournament.

“I couldn’t tell you the last time a Pahrump team went to state at any level,” Middleton said. “It’s a great feeling.”

“It’s amazing,” Amaya said. “It’s been a long time. We worked hard in practices, we keep focus, and we never quit.”