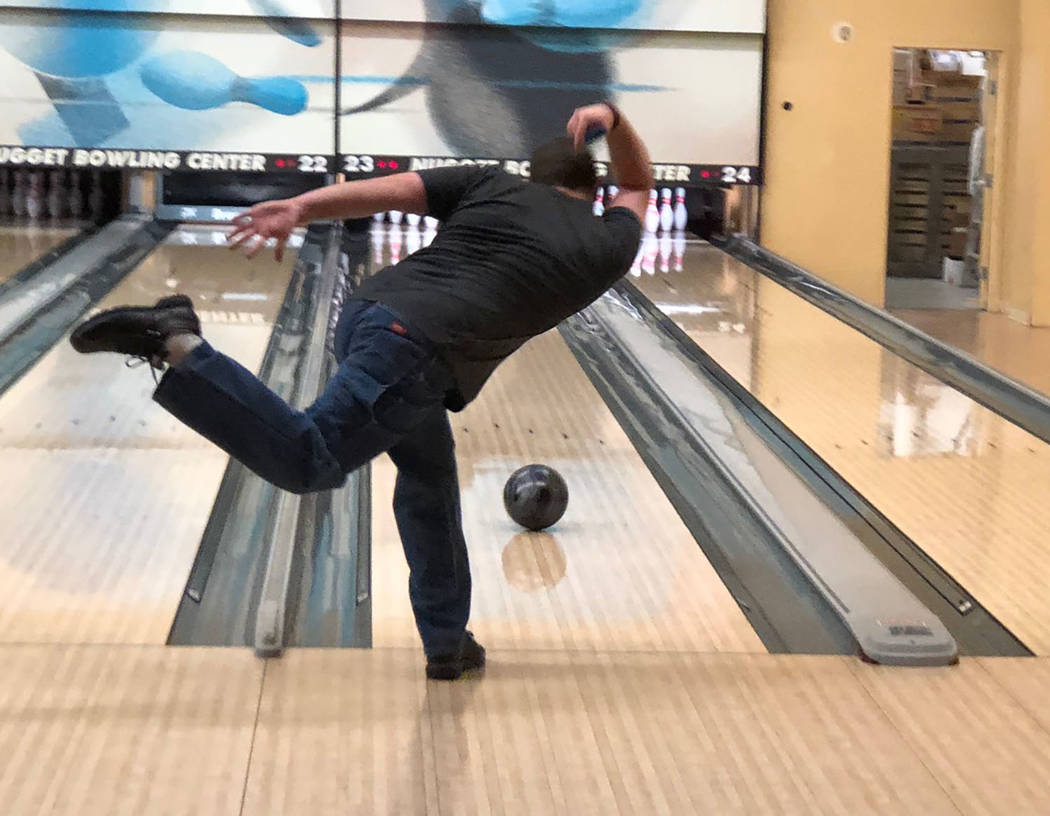 Tom Rysinski/Pahrump Valley Times Zahn Bouder of Pahrump tests out a new ball Wednesday morning after bowling in his league at the Pahrump Nugget Bowling Center. 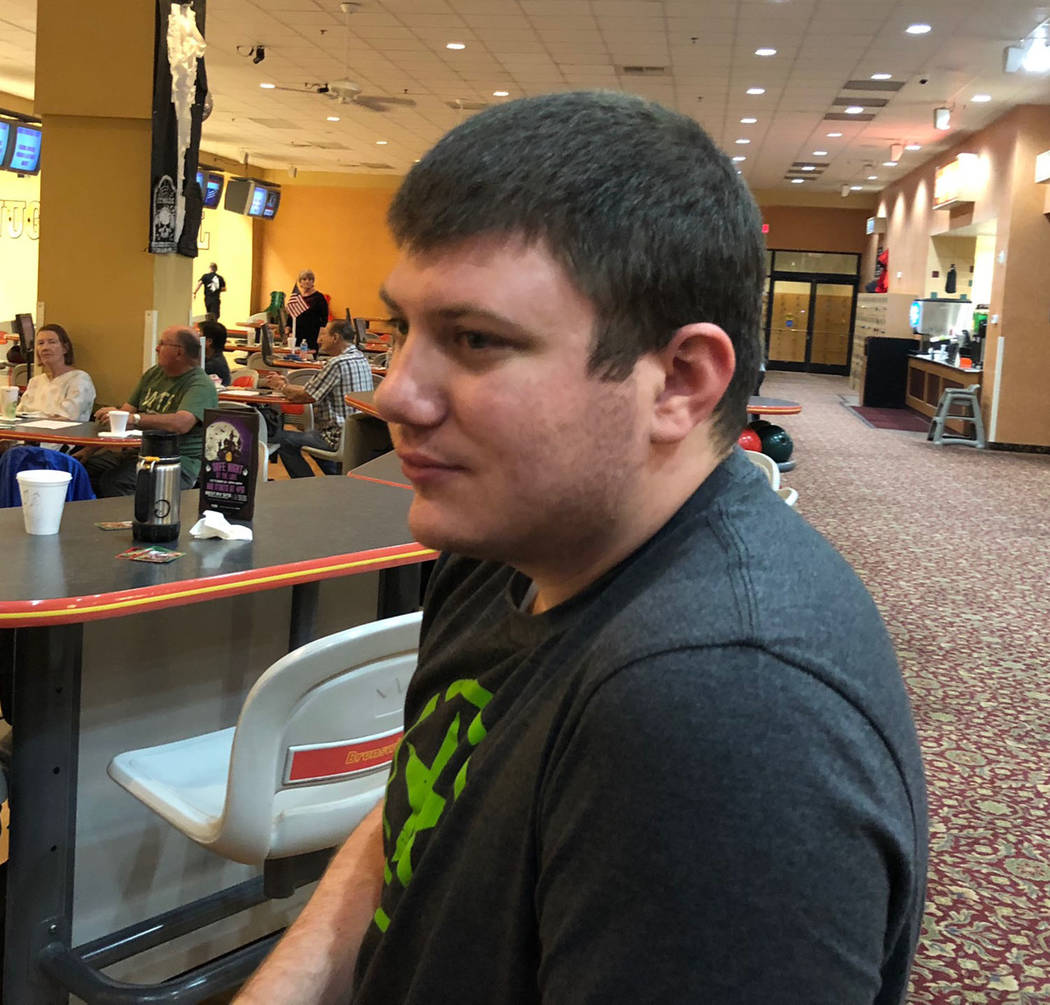 Zahn Bouder was concerned about the same thing about which every other bowler rolling a potential perfect game is concerned.

Bouder spends every moment he’s not sending a ball down the alley during a game seated, on his phone. The possibility of his phone dying would have thrown off everything.

“It was down to 10 percent power,” he said. “I was so worried about losing my phone.”

But the phone stayed charged, and so did Bouder, who, using a ball he won in a raffle and had only used twice previously, rolled his first 300 game Sept. 26 at the Pahrump Nugget Bowling Center.

“I didn’t start thinking about it until the eighth frame,” he said. “When I was younger I had a shot at a 300 and messed up in the eighth. Ever since then, once I get to the eighth frame I look up and go, ‘Oh I’ve got seven in a row.’ I go for the eighth, and it just hasn’t carried out. I wasn’t paying attention that morning, but after the eighth I looked up … ‘Oh, no.’ That’s when everything set in. Ninth frame, I’ve got four more to go.”

Bouder said only one of his 12 strikes was a little shaky.

“I got up there, and once I released the ball I saw where I put the ball down. It was too close to my foot. So I knew immediately I would either get lucky or I’m going to leave something dumb. I actually tried to leave something dumb. I tried to leave the 7-10. I left the 7-10, then watched the 7 tip over and then I watched my famous head pin come over and take out the 10 and crush it out. I just collapsed down on my knees. I couldn’t handle it. It was a miracle in itself.”

Bouder, who has lived in Pahrump for 23 of his 24 years, said he bowled with his parents when he was 4 or 5 at Mountain View. Then, when the Nugget bowling center opened in 2005, he joined a youth league and has been bowling ever since.

He had been bowling once a week, but this year he’s bowling in leagues Tuesday night and Wednesday morning. The perfect game came on a Wednesday morning, and Bouder does not think that’s a coincidence.

“My biggest problem when it comes to bowling is I have to bowl with the more consistent bowlers, because that way I’ll know how the shot’s going to be changing,” he explained. “That’s part of the reason I shot the 300. I was bowling against some of the better senior bowlers, and they were able to stay on their marks and I was able to stay on mine. I stayed out of their way, and they stayed out of mine.”

Being the youngest person in the room doesn’t faze him. In fact, Bouder said it has an impact on the atmosphere, as nobody bothered him as he was rolling toward perfection.

“If it was on Tuesday night, I’d probably have it brought up to me,” he said. “Wednesday morning, I’m the young one on the team, so I’m kind of in the back sitting around.” On his phone, of course.

When it was his turn to bowl, Bouder said one key was not trying to be too careful.

“For most people shooting a 300, there are different mindsets they get into,” he explained. “You’ve got to get the ball right where you need to. But when you start doing that, normally around the 11th and 12th shot, you start aiming the ball, and that’s when you leave single-pinners. For me, I got my ball just a little bit on the wrong side of my mark. There’s no 300 where every single ball went exactly where you needed it. There’s a luck factor that plays into it, and my luck factor came on my last shot.

“With the last shot, most people will really aim that ball. They want to get that ball right on their mark. They get up on that mark, and that’s when they leave those 8’s, the 9’s, the 10’s.”

For those who doubt a perfect game requires perfection, Bouder has science on his side.

“When it comes to that last shot, you don’t want too perfect,” he said. “There have been some studies done with pro bowlers versus a completely robotic system, where the robot will throw the ball exactly every single time, and any time it leaves something it will make the proper change and continue off that. The real bowler outshoots them every time.”

That’s not to say Bouder gets up and randomly throws the ball around and hopes for the best. But he said the key is what happens before the bowl goes rolling toward the pins.

“It’s interesting how precision in bowling isn’t necessary,” he said. “It is, but it isn’t. The only parts that really matter are on the approach, before the foul line. Anything past that, the ball is on its own. You’re not controlling it any more. As long as you can get the ball where it needs to be, you can normally get away with it.”