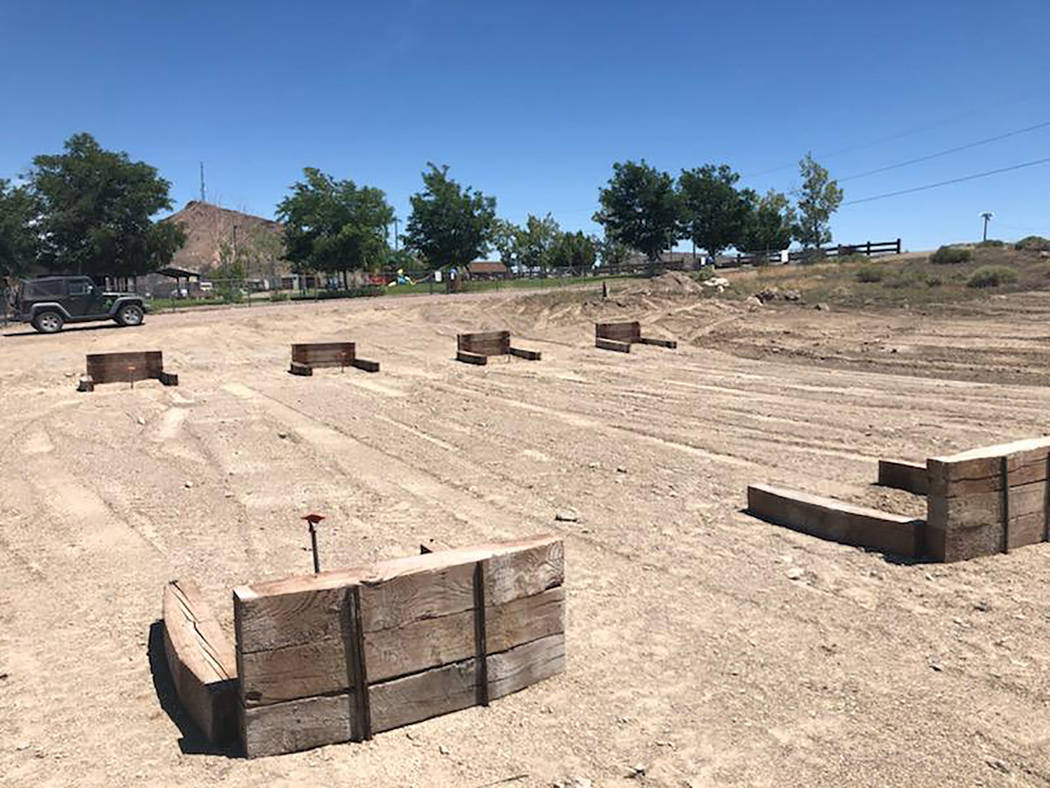 Lathan Dilger/Special to the Pahrump Valley Times New horseshoes pits take shape at Goldfield Park in preparation for the first horseshoes tournament to be played during Goldfield Days. 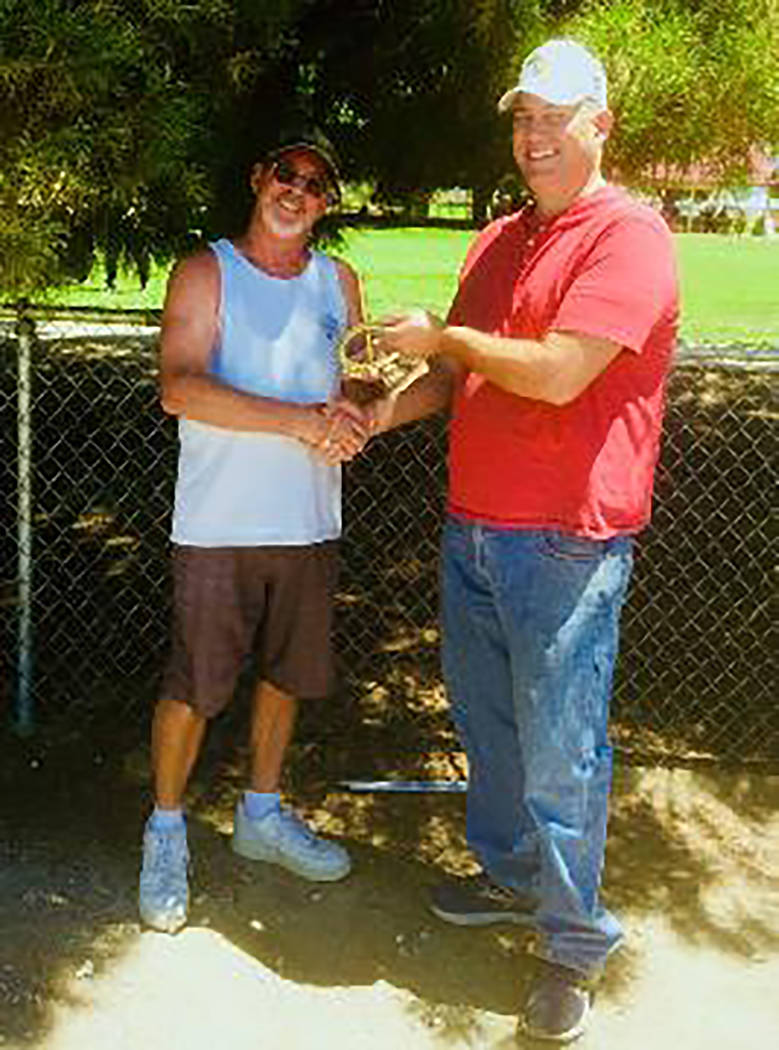 Lathan Dilger/Special to the Pahrump Valley Times Mark Kaczmarek, left, of Pahrump is congratulated by Garth Harris of Las Vegas for winning the horseshoes tournament at the Pioneer Celebration on Saturday at Ian Deutch Memorial Park in Pahrump.

This weekend will mark the 19th edition of Goldfield Days. And, thanks to the efforts of Pahrump resident Lathan Dilger, this year will be the first to include a horseshoes tournament.

“I called them up to see if they had a horseshoes tournament, and I just happened to get hold of the right lady (Cheri Bickham, the entertainment coordinator),” Dilger said. “A month or so later she got back to me and she said she went through the town and everybody’s happy with it, we just have to run it through the Esmeralda County commissioners.

“They ran it through them and they approved it, and I believe somebody donated the land right next to the park for it, and somebody else donated the wood for it. And a lot of the townspeople came out and donated their time building it.”

Other donations are making the tournament more lucrative. Dilger said Jeri of the Goldfield Stop Inn and Just Jeri Photography donated $200, as did Esmeralda County’s economic development authority, thanks to Bickham. Those will be added to the prize pool. Karie of the Dinky Diner kicked in $150 for trophies, which will go toward the top three in the singles tournament and the top three teams in the doubles tournament.

Dilger received $50 from Jeff Hicks at Barbarossa and Bear, which he used to buy prizes for the raffle, while Jina Greenway of Mozart Tavern and Laurel Arnold at Santa Fe Saloon and hotel, owned by Jim Marsh, each donated T-shirts and hats, with Greenway kicking in a bottle.

Also helping was Central Nevada Hardware, which offered a big discount on the sand, which Dilger learned was delivered Tuesday. “You can’t play in dirt,” he said. “You get it wet and it turns to mud.”

Ten pitchers already have signed up to participate in the tournament, Dilger said, with most of them from Pahrump. But Dilger expects more.

“I’m pretty sure all of these people who are working on this thing are going to pitch,” he said.

The entry fee for is $10 each for the singles or doubles tournaments — “Usually these events are about 20 bucks,” Dilger says — and includes a raffle ticket. Dilger is unsure if the formats will be the round-robin style, like the tournaments sanctioned by the Nevada Horseshoe Pitchers Association, or a double-elimination event.

Bringing a horseshoes tournament to Goldfield Days is part of a large plan envisioned by Dilger, who is running for president of the state association.

“I’m trying to create tournaments all along the 95 beltway,” he said. “We did Tonopah for Jim Butler Days, Amargosa Days, and we’ll do them again next year, and I’m working on Beatty. They have 18 pits there, and they’re just sitting there.”

Dilger also is working on adding horseshoes to the Tecopa Takeover music and arts festival in Tecopa Hot Springs and Shoshone Days in California.

It’s an ambitious agenda for someone who has been involved in horseshoes for less than a year.

“Lathan’s a go-getter,” said Mike Norton, the secretary-treasurer of the state association.

“An article in the Pahrump Valley Times quoted Mike saying come on down and pitch, everybody’s friendly,” Dilger recalled. “It was right before the harvest festival last year. I was golfing with Kasey (Dilger’s son, a former Pahrump Valley High School varsity golfer), and I twisted my hip a little too much, so I said I’d hold off on golf and make sure it heals.

“I have pits in the backyard and I was bored, so I started pitching. And I read the article that same day and said I think I’ll go down there. It was Saturday morning, and I was just leaning on the fence watching them. They said, you pitch? Yeah. You got shoes? Yeah.”

Pitchers can sign up until 10 a.m. Sunday for the singles and 3 p.m. Sunday for the doubles at Goldfield Park. On Saturday, the Shade Tree Open, a sanctioned horseshoes tournament, will be contested at Petrack Park, with registration closing at 9 a.m. and play starting at 9:30.

“We did a single-elimination tournament,” Dilger said. “We had 20 people signed up for it. We had three hours to play. Thw town put in two temporary horseshoes pits, filled them with sand. We thought it was going to be kind of rinky-dink at first, but it turned out pretty good.”

Dilger said Garth Harris of the Nevada Blue Diamond Stake of the Church of Jesus Christ of Latter-day Saints, which hosts the event, is enthusiastic about horseshoes and will organize a tournament at Mountain’s Edge in Las Vegas.

“Garth is going to put up $1,000 added money,” Dilger said. “He’s going to buy trophies. That’s going to be a good tournament. We’ll probably get everybody in Vegas, and everybody from Pahrump I’m sure will go.”