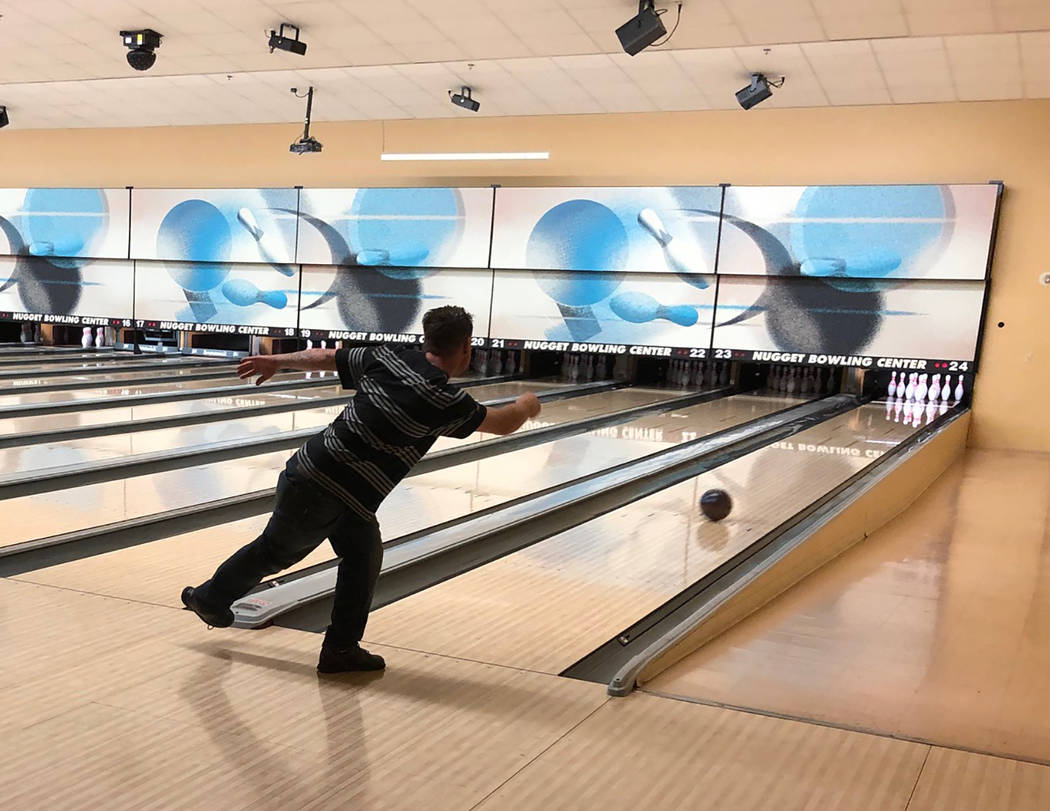 Tom Rysinski/Pahrump Valley Times Anthony Matassa of Pahrump shows off the form that allowed him to bowl perfect games March 15-16 at the Pahrump Nugget Bowling Center. 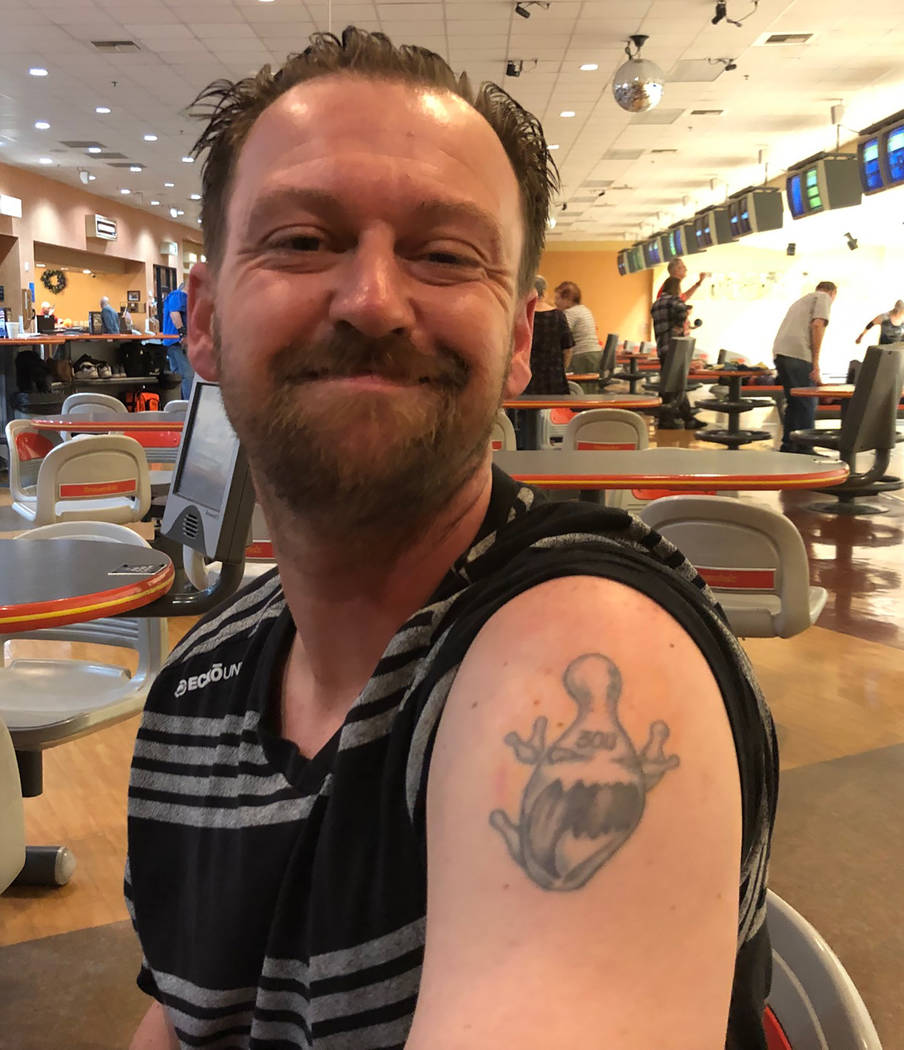 Tom Rysinski/Pahrump Valley Times Pahrump resident Anthony Matassa shows off the tattoo marking his first 300 game, which he rolled Jan. 20, 2002, his mother's birthday, when he was 16 years old. 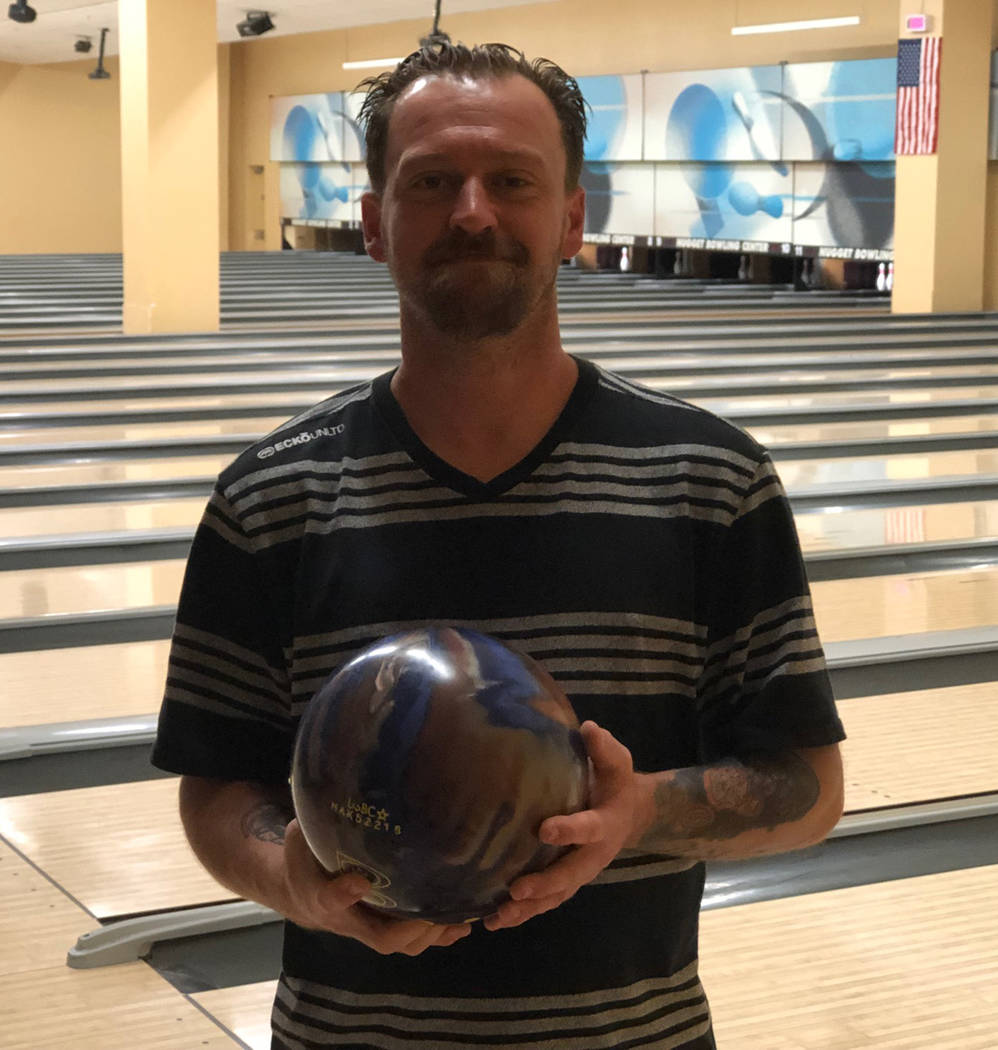 He has just bowled his fifth perfect 300 game the night before at the Pahrump Nugget and was spending the day with his kids at his nephew’s third birthday party. Afterward he headed back to Pahrump to bowl in the Saturday Night Rollers League.

And then he went out and bowled another perfect game.

The 300s on back-to-back nights would be special for anybody, but for Matassa combining family time with a second perfect game made it even better.

“I had such a great day with my kids playing at the birthday party. It was awesome,” he said. “Then my dad was here to see both of the 300 games.”

Joe Matassa got a very good look at the first of his son’s weekend 300s.

“In the Friday night league, when I shot that 300, I was bowling against my dad,” Matassa said. “He was on the other team.

“My dad is the one who basically raised me up bowling,” added Matassa, who said he started bowling at 5 years old. “I used to be a resident here back when I was a kid. I went to Rosemary Clarke Middle School, and I bowled at Mountain View Casino and Bowl before it burned down.”

Matassa, who lived in Las Vegas for a while before returning to Pahrump, is averaging 223 in his Thursday night league and 226 in his Saturday night league. His appearance in the TGIF League was as a substitute.

“Around the seventh frame I went through the nose and carried out the 4-7, and then the ninth and 10th frame I was so nervous. I was shaking really bad. I had four (perfect games) prior to Friday and Saturday, and it’s been three years since I shot my last one.”

“I thank my dad and I thank my kids, because if I didn’t have them I wouldn’t have been so enthused and so relaxed coming to the bowling game,” he said. He also thanked Track Bowling, as he used his Track 919C, which is a retired model, in both of his perfect games.

Matassa even gets his kids, Anthony, 13, and Hailey, 11, to the bowling alley on occasion.

“I moved out here in November of last year, and I’ve had such a great time,” he said. “I have my kids come out every other weekend. We ride four-wheelers, we do this and that, we even go bowling. My daughter throws with two hands.”

Not surprisingly, Matassa remembers the details of each perfect game.

“On my 11th shot, I got so nervous,” he said of Friday’s 300. “I hit the pocket so good and I left up the 9-pin, and here comes this pin bouncing off the wall and knocks it down. I turn around, and my dad’s not even looking.

“I get up there again, calm myself down, and buried the pocket. It was nice.”

“I called my team and said I would be late for the first game,” he recalled. “I come in, get all my equipment ready, didn’t have any practice, no nothing. Shoot 195 my first game. I left six 10-pins, missed one. I adjusted for the 10-pin, made a little bit of hand movement, and I go all the way to the ninth frame.

“I crushed the pocket, then here comes another 9-pin and I’m thinking I’m going to leave it. Boom, it falls over. My 10th and 11th shot, buried them. My 12th shot, I get up there and I’m nervous again, but I’m not thinking about it this time. Release the ball, came clean off my hand, felt good, hit the pocket light. Here comes two pins off the wall, roll across the lane and knock the 10-pin over.”

For someone who now has six perfect games, Matassa has never experienced the agony of coming within one ball of 300.

Matassa, who graduated from Clark High School after one year at Pahrump Valley High School, has been in a good place since moving back to Pahrump, as has his father, who is bowling to a 202 average at age 68 and has bowled a perfect game.

“He’s been such a happier person since I’ve been out here,” the younger Matassa said. “He’s gotten to spend more time with his grandkids than he ever has before.”

And Joe Matassa will be spending some very special time with his son in May, at the United States Bowling Congress Open Championships at the South Point Bowling Plaza in Las Vegas.

“This year, me and my dad are bowling nationals together for the first time,” Anthony Matassa said. “We get to bowl the team event together, and then we get to bowl the doubles and singles.

“It’s going to be a great moment because me and my dad will be bowling for the first time together in a tournament.”