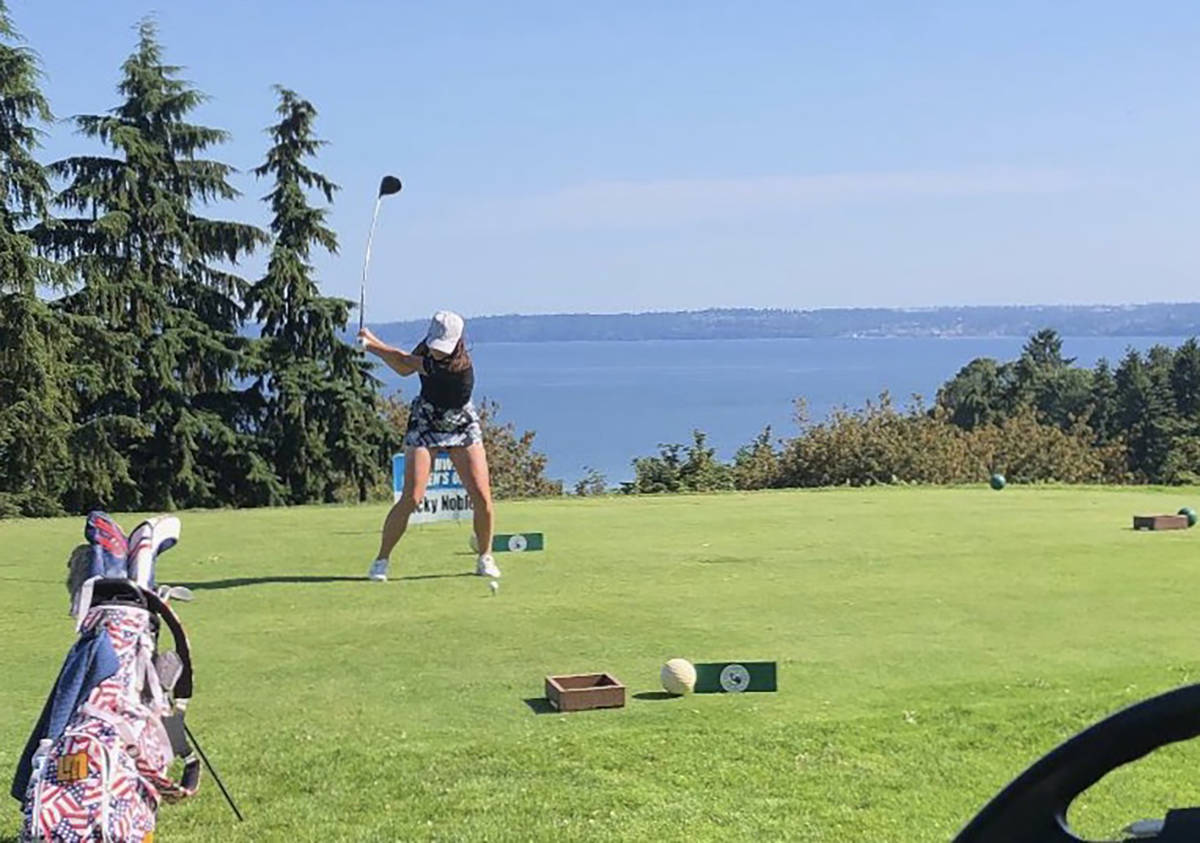 Phyllis Davie/Special to the Pahrump Valley Times Pahrump resident Tori Peers tees off with Puget Sound in the background at the Northwest Women's Open last week in Federal Way, Washington. 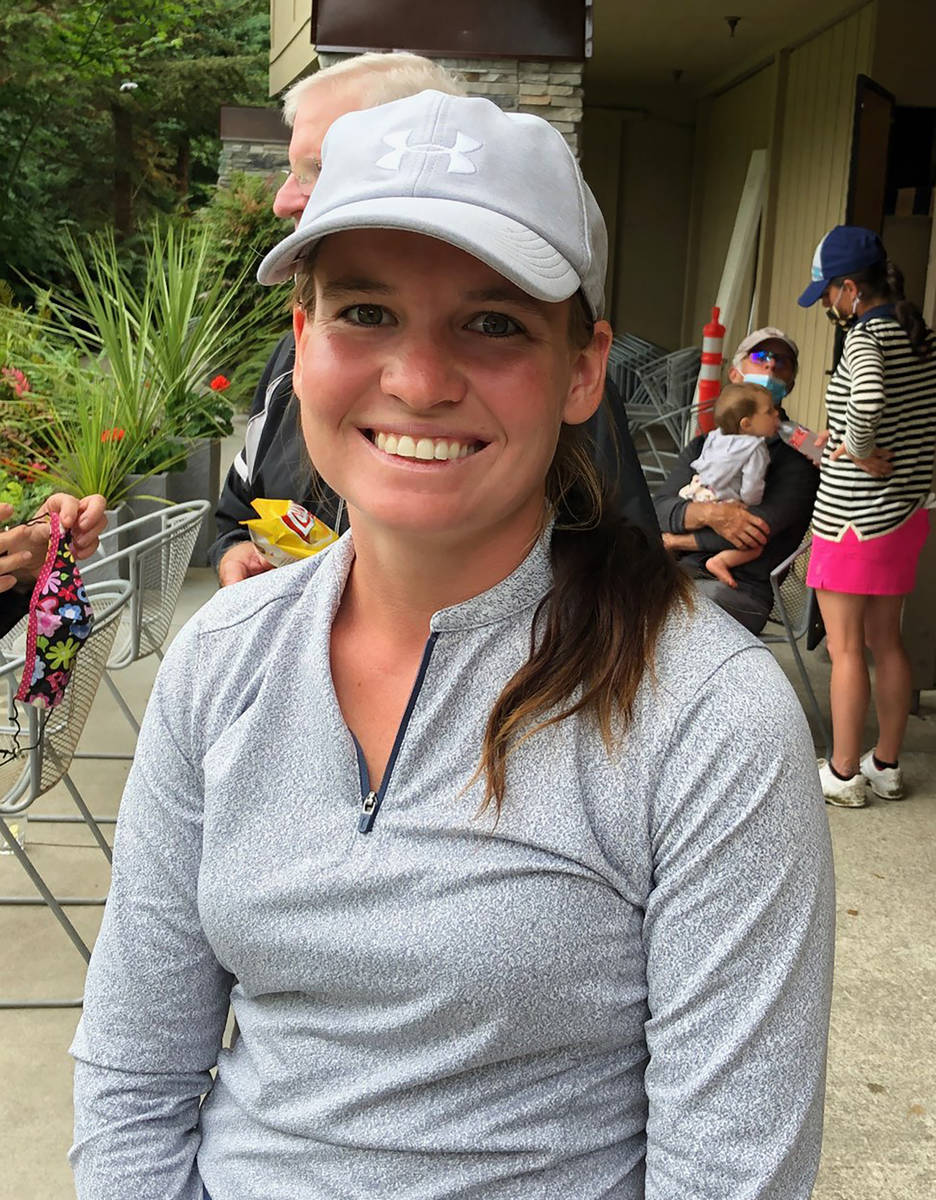 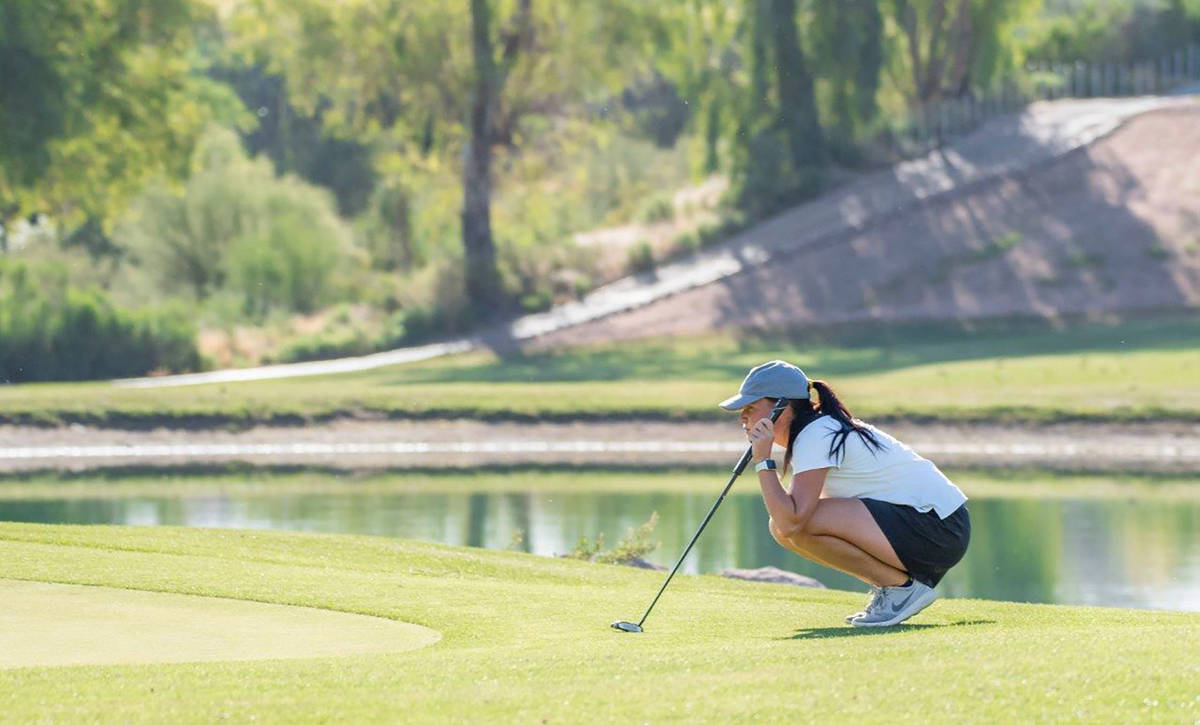 Phyllis Davie/Special to the Pahrump Valley Times Tori Peers lines up a putt during the Northwest Women's Open in Federal Way, Washington. Peers shot a two-round total of 141 to finish second.

A lot of kids playing youth sports dream of playing professionally. Each time they go in the batter’s box, they fantasize about the World Series. Each time they step up to the free throw line, there are 3 seconds on the clock in Game 7 of the NBA Finals. And each putt is the 18th green at Augusta.

While very few make those dreams a reality, Tori Peers has started on that path.

The $900 she pocketed for placing second at last week’s Northwest Women’s Open in Washington might seem far from the U.S. Women’s Open, which paid $1 million to its champion for the first time in 2019, but Peers knows the path that leads from one to the other.

“At the basic level for mini tours you just have to sign up for tournaments, then to work your way up to the LPGA is a different story,” she said. “With the coronavirus there’s no qualifying school this year, so a year from now is Stage 1 of Q school. You place in the top 40 percent and you go to Stage 2, and the top 40 percent there go to Stage 3. So there are fewer and fewer people as you go. It goes from like 1,000 people to 100.”

It will take time and, of course, a lot of good rounds of golf to advance through the stages, but Peers has the confidence of a golfer who has enjoyed success at every level. She started playing golf at 5 years old because of her brother.

“Will got me into it,” Peers said of her brother, four years her senior. “I did everything Will did when I was a kid. We went from one sport to the next. Then I got told by enough grownups that I was a natural, so it became my thing and I stuck with it.”

Some of those grownups are familiar names to anyone involved with youth golf in Pahrump.

“The Goinses, Larry and Elaine, and Mr. (Bob) Hopkins,” replied Peers when asked about who helped her when she was starting out. She would have played for Hopkins had she attended Pahrump Valley High School, but her family moved to Nebraska when she was 12.

“My mom grew up in Nebraska,” explained Peers, who played golf there at Grand Island Senior High School, graduating in 2014. The Islanders were a girls golf power.

“I had a good high school team,” she recalled. “We won two state championships while I was in high school. I had three top 10s at state during high school, and I averaged 76 my senior year.”

So after leading a good high school team in scoring average, college golf beckoned. She was recruited to play at California State University, Bakersfield, where she had a stellar career.

“I wanted to get away from the snow and get closer to my grandparents,” she said. Her family is now back in Pahrump, although Will, who has been general manager at Lakeview Executive Golf Course and assistant golf pro at Mountain Falls Golf Course, moved his family back to Nebraska last year.

Peers played in every event all four years for the Roadrunners, just the third women’s golfer in school history to do that. She placed 15th at the Western Athletic Conference Championships as a freshman (the Roadrunners joined the Big West Conference last month) and led the team in scoring average for the rest of her college years.

She left the program as the CSUB career leader in rounds (102) and rounds in the 70s (57), and her 79.45 average ranks second on the school’s career list. Her scoring average of 77.21 as a junior ranks best in school history.

None of that did much to kill Peers’ dream of becoming a pro.

“I feel like I’ve always wanted it,” she said. “I realized it was more attainable throughout college.”

So far she has played in 15 tournaments, traveling as far east as Colorado to compete. Back in Pahrump, she again is a familiar face in local golf.

“I work in the pro shop at Mountain Falls, and I caddie at Bali Hai (Golf Club in Las Vegas),” Peers said. “Golf’s expensive, so I have three side jobs to keep up with playing professionally.”

The entry fee for the 60-woman field at the Northwest Women’s Open was $230 for professionals, and that doesn’t take into account travel and lodging. Entering doesn’t guarantee prize money, although the fee did include a practice round, two lunches and the Pro-Am Banquet.

In any event, it was well worth the trip to Federal Way, Washington, between Seattle and Tacoma, to play at Twin Lakes Country Club. Only eight players in the tournament carded a round under par; Peers was one of three to shoot under par for both rounds, posting a 70-71-141 to finish 2 strokes behind champion Sarah Rhee.

“It was tree-lined, with lots of bunkers,” Peers said of the course. “It played a little bit shorter if you could hit your driver accurately.”

“My tee shots were really strong this week,” Peers said. “First time breaking par in a tournament was a big one, but I definitely feel like I could have played better.”

But it was good enough for Peers to count the Northwest Women’s Open as her favorite moment of her year and a half as a pro.

Although it’s a year away — dates have not yet been announced — Q School isn’t far from Peers’ thoughts.

“Stage 1 is in Palm Desert (California), Stage 2 in Florida, and I think Stage 3 is in South Carolina,” she said.

And she’ll have to get time off from three jobs to do it.