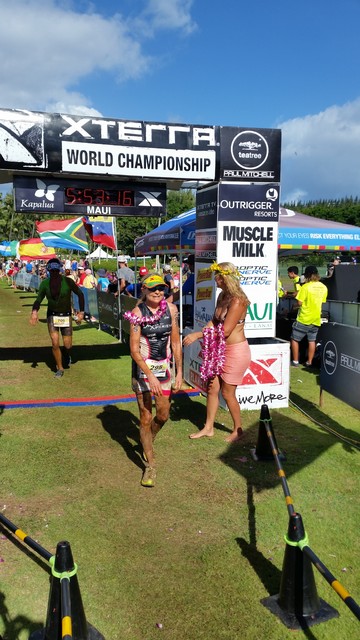 Special to the Pahrump Valley Times Cindi Toepel at 65-years-old crosses the finish line for the Xterra World Championships in first place in her division. 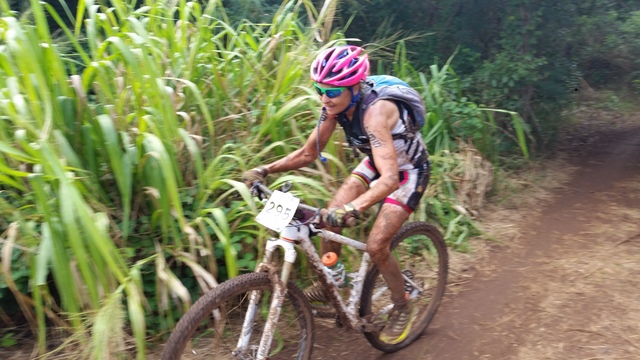 Special to the Pahrump Valley Times Cindi Toepel on her mountain bike at the Xterra World Championships in Maui. That day she had to ride 20 miles uphill. 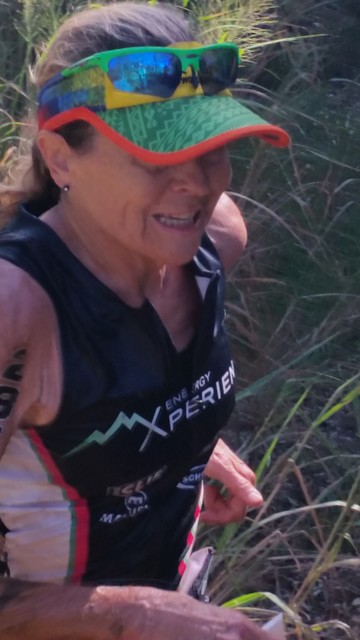 Special to the Pahrump Valley Times Cindi Toepel, a Pahrump resident, runs in the Xterra World Championships in Maui on Oct. 23 and she won. She ran seven miles for this triathlon.

On Oct. 23 it was an ordinary day for 65-year-old Cindi Toepel. The Pahrump resident awoke, ate breakfast and then went to work.

That’s where her work day differs from the majority of most people living in the valley.

Toepel ran seven miles, rode 20 miles and swam one mile through 12-foot waves, winning the Xterra World Championship on the Hawaiian Island of Maui for her division.

“I love to compete and I am a competitive person,” she said. “I love being able to get by people in a race. I push myself to get by a person even if they are not in my division. It’s a thrill to me, along with being on the podium. I have won the Xterra World Championship competition seven times.”

Toepel is an off-road triathlon competitor in the 65-to-69-year-old division. Although she does not compete at the pro level, but she works professionally as a triathlon coach.

Toepel has been biking since she was six. She started road biking when she was 35 and didn’t start mountain biking until she was 52. When she was 50 she did her first Ironman, where the bike ride is 112 miles, the swim is 2.4 miles and the run is 26 miles.

“It may be less distance but they are not easier,” Toepel said. “There is a 3,500-foot elevation gain in the mountain biking course.”

She has been doing the Xterras since 2003.

Toepel said doing triathlons has been a big part of her, and her husband Circ Toepel, life since they met.

“I have been married for 35 years and I did triathlons with my husband in the 80s,” she said. “We have both been athletic most of our lives. He no longer runs, due to his back being fused, but he still rides.”

The couple mountain bike together when Cindi is not competing.

“We love mountain biking in Colorado and have been to Fruita a lot,” she said. “One reason we moved to Nevada was because of all the BLM land to explore. We love to travel around and discover places to ride.”

Toepel has not slowed down since getting older. She does seven of the Xterra-type competitions each year.

“I do have the energy but I have found as I have aged that it takes more time for my body to recover,” Cindi Toepel said. “I coach other athletes on how to compete, and it helps me because I am always thinking about what I have to do to keep going.”

Cindi Toepel loves the adrenalin rush and does it for the love of the sport.

As she aged, she has found out what her body can do under triathlon conditions. She said she learned through trial and error. Some days are better than others at her age.

“It varies on how long it takes me to recover from a competition depending on how much energy I expended,” Cindi Toepel said. “Some competitions only take a day or two. I am still not recovered from the last one three days ago because of the elevations involved. This last race was tough due to the wet conditions on the course and the 12-foot waves.”

Her recovery and how well she does depends on the quality of nutrition she ingests during and before a competition.

“I did my share of puking,” Cindi Toepel said. “I have learned what products worked. I also learned that Coke and a Snickers bar just don’t cut it anymore like it did when I was in my 30s. Clif products work for me. I have been using this product since 1998.”

When it comes to footwear, she uses Sidi bike shoes and Hoka running shoes.

Hoka may not be a known brand name at the high school, but she said it’s popular in competitions.

“I prefer the hardtail (suspension in the front only) because they tend to be lighter and I don’t need to be burning too much more energy when going up hills,” Toepel said.

When she competes, Cindi Teopel relies on her crew chief and coach to keep everything going, and that’s her husband.

That’s what her husband lives for. He is a big reason she has been able to compete at the level she does.

“I push her on the mountain bike to levels that she couldn’t get to with just the people she rides with,” he said. “We competed together in the World Cup so I know the levels she can handle.”

He said he trains with her and also supports her with his mechanical knowledge of bikes.

“One, I make sure she can fix things out on the course,” Circ Toepel said. “One race her chain broke and I had trained her on how to fix something like that and this training got her second place.”

He said he also makes sure that the bike is in top condition before the race.

“I wrench everything so she doesn’t worry about it,” her husband said.

Circ Toepel believes that his wife does so well in these competitions because of her “genetic superiority.”

“My wife’s dad had a strong lung (he only had use of one) and so she has strong lungs,” he said.

He also believes her mental focus is a big part of her success.

“My wife is extremely intelligent and this means she is mentally focused,” Circ Toepel said. “When she decides to do something you don’t want to get in her way. She has never quit a race and she never does third, fourth or fifth.”

And finally, he said, Cindi Toepel has to be balanced.

“She only did Ironman once because there was no balance in our lives, just training and racing,” he said. “The training hours required for those distances are insanely large.”

And speaking of fun, he said his wife’s motto is “I race for wine.” Her favorite zin comes from the Pahrump Winery.