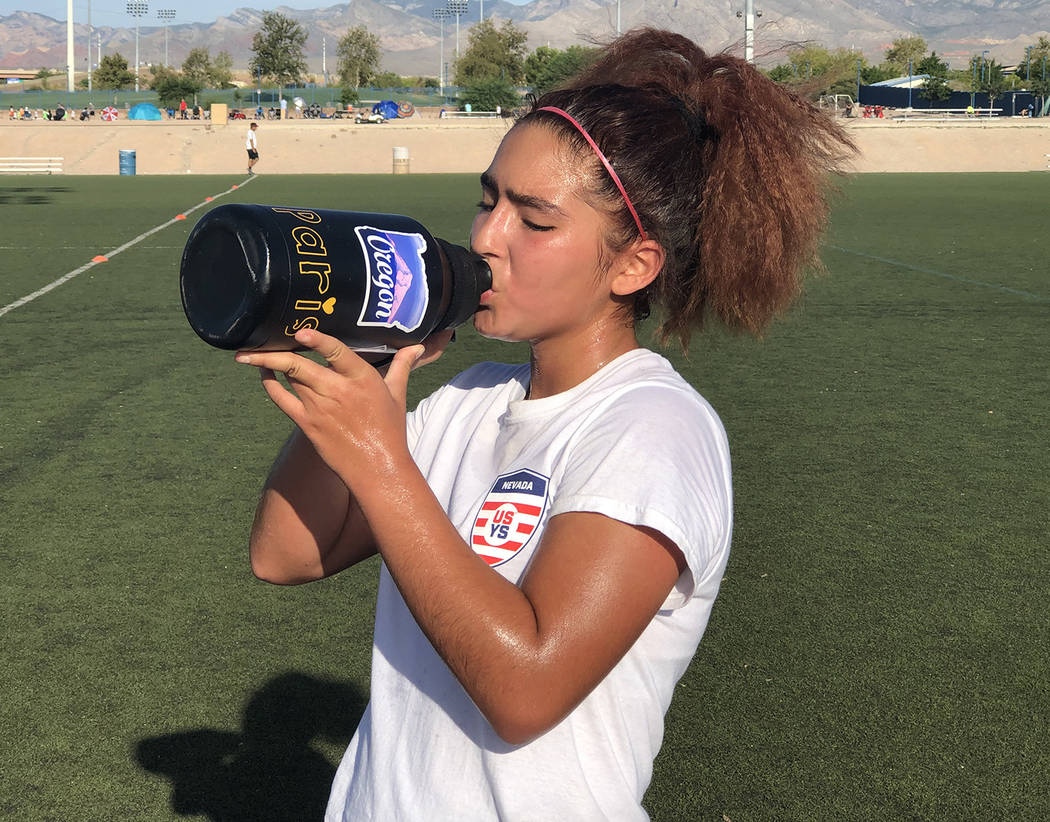 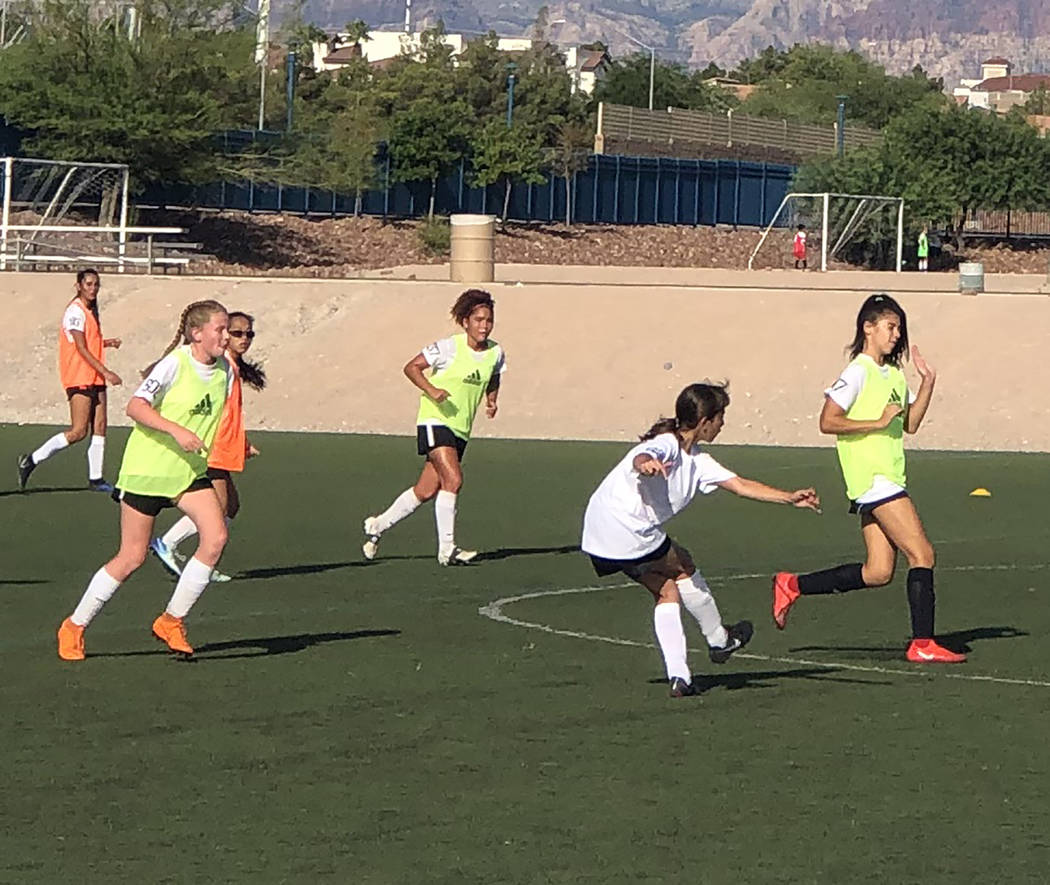 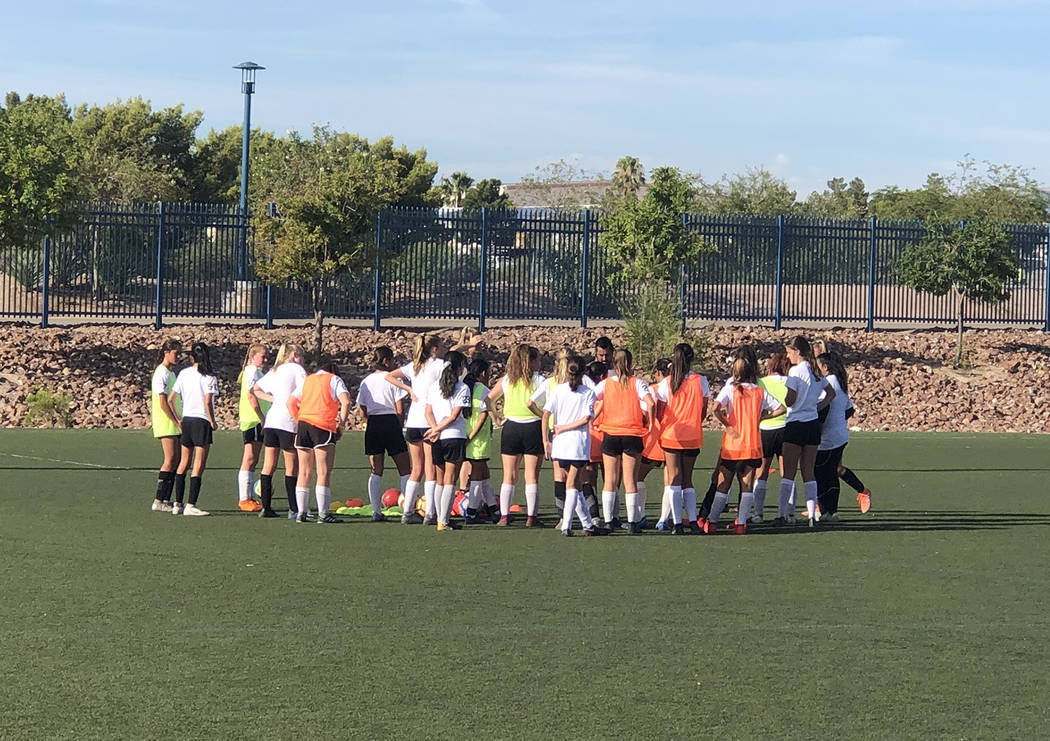 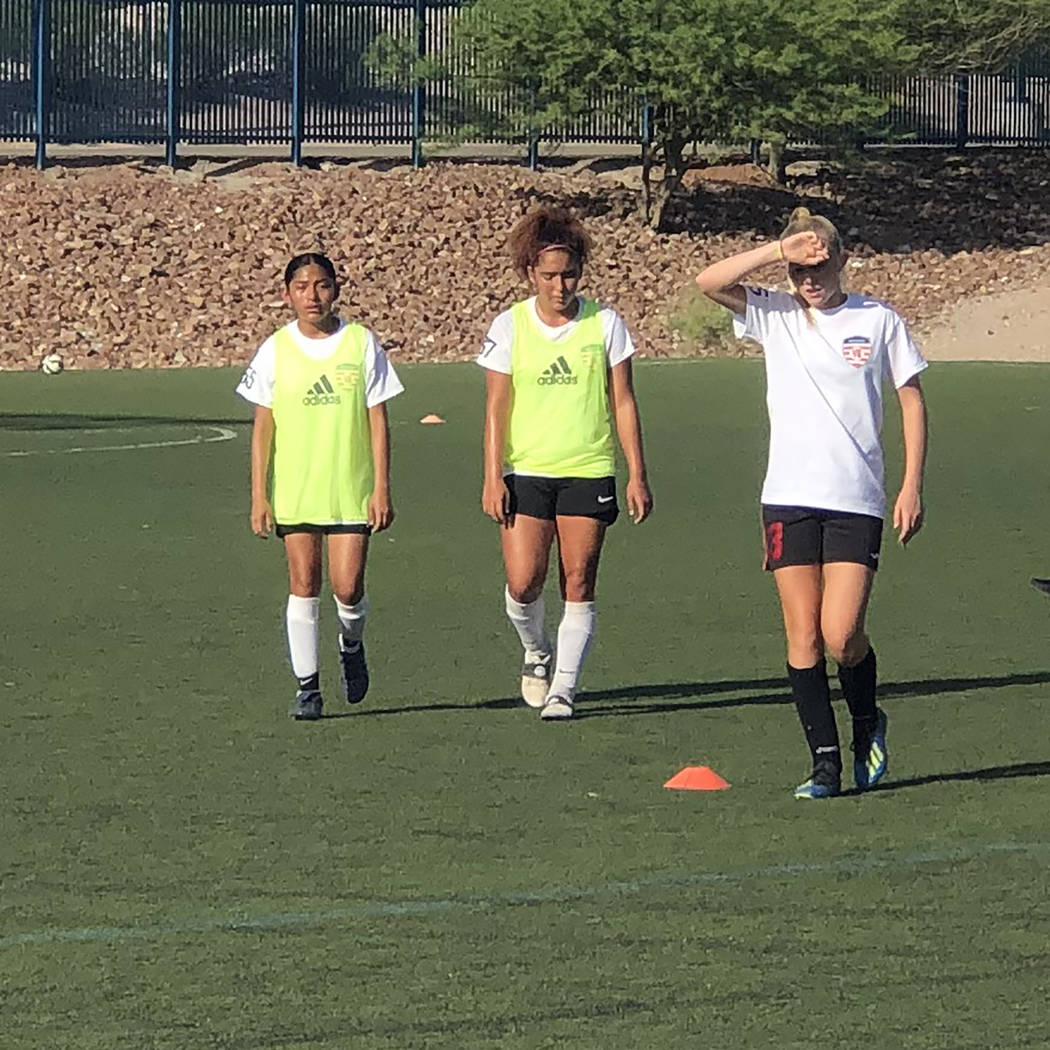 Tom Rysinski/Pahrump Valley Times Paris Coleman, center, of Pahrump heads off the field after a tryout for the Olympic Development Program in Las Vegas.

It was 7 a.m. on a Saturday morning, and Paris Coleman of Pahrump was among almost two dozen girls on Field 5 at the Kellogg Zaher Soccer Complex in Las Vegas.

Coleman, who plays for Heat FC National in Las Vegas, was the only Pahrump player trying out for the Olympic Development Program 2005 soccer team.

“I thought I did pretty good,” she said. “If I make the pool-play team and then the next team, we play the ODPs from other states and hope to win the main OD tournament at the end of the season. Last year this team took second place.”

There’s no longer an “if” about the pool-play team, as Coleman officially made the first round of cuts and is guaranteed a spot. That should come as no surprise to those who have seen her play.

That No. 3 team in the nation, Elite Club National, had a place for Coleman.

“They offered me a spot on the team, which I declined because I just joined my team seven months earlier,” she said. “I haven’t even been on the team a full year yet.”

The Olympic Development Program was formed by U.S. Youth Soccer in 1977 to identify a pool of players in each age group from which a national team will be selected. Each state association holds tryouts on an annual basis, and players are evaluated on the basis of technique, tactics, fitness and athletic ability and attitude.

It has been a fairly quick rise for Coleman, who not long ago was playing for her father with the Junior Trojans Soccer Club.

“When I started soccer I was about 4 playing rec,” Paris Coleman said. “I’ve only been playing club for about two years.”

“When I started with the Trojans, the only competition to play club was in Las Vegas,” Danny Coleman explained. “We’d come into Vegas every other weekend. We made a deal with the league, and they said come every other weekend and we’ll give you two games so you don’t have to come in every weekend.

“And that’s when I started meeting new coaches and making some contacts and learning more about everything that’s going on in Vegas.”

And learning more about what goes on in Las Vegas opened doors for Paris.

“When they got wind of it in Vegas that Paris wasn’t playing for the Trojans any more, I had a few phone calls from coaches saying, ‘Have her come to my practice,’” Danny Coleman said. “We came into Vegas for a couple of weeks going to different practices. She went with the team she felt most comfortable with, and that’s why she chose Heat.”

Paris Coleman relishes the competition she faces with Heat FC National, and hopes to take it to the next level with ODP.

“It’s very intense, and it’s not like anywhere else in Nevada,” she said. “ODP soccer is way more high level than lots of other states. You have to shine out here or else you’re not going to be noticed.”

“Paris is a solid player that possesses great size and is very athletic for her age,” Delgado said. “I thought she performed very well as a first-time participant to the ODP process.”

And Danny Coleman knows her experience playing with Heat FC National is helping his daughter shine out there, even if he had doubts at first.

“I had coached her her whole life,” he said. “That was kind of nerve-wracking for me, because I know how I coach and she had done well. She made a name for herself. And this coach (Sergio Rodriguez), I believe, is the next level above me for coaching. He’s widely sought after for private practices and everything. She has gotten so much better.”

“I get improvement from each and every coach I play with,” Paris Coleman said. “They all teach me something different.”

She has played in several states and is eager to add more to her list. But don’t get the idea that soccer is Coleman’s only sports love.

“I play soccer, softball, basketball, volleyball and I run track,” the Rosemary Clarke Middle School eighth-grader said. “It keeps me busy, and I have to keep up my grades. I have to make time.”

And while she’s looking forward to competing for Pahrump Valley High School, she will be doing so indoors during future fall seasons.

But soccer remains No. 1, and Coleman, who usually plays center back or holding midfielder but is willing to play anywhere she is needed, is committed to the game.

“I come here every day,” she said, referring to Las Vegas. “This is my life.”