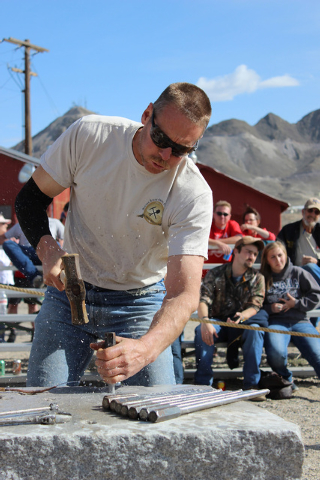 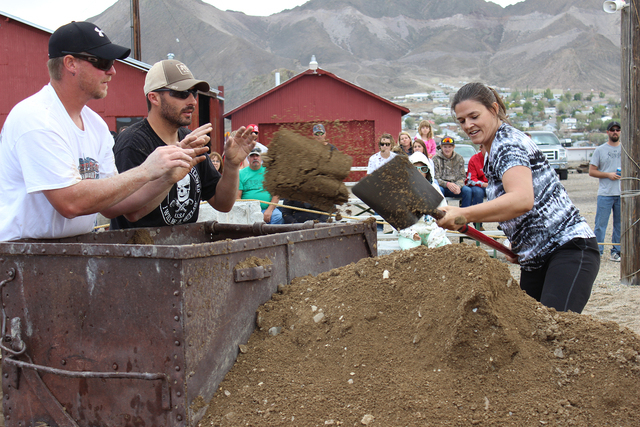 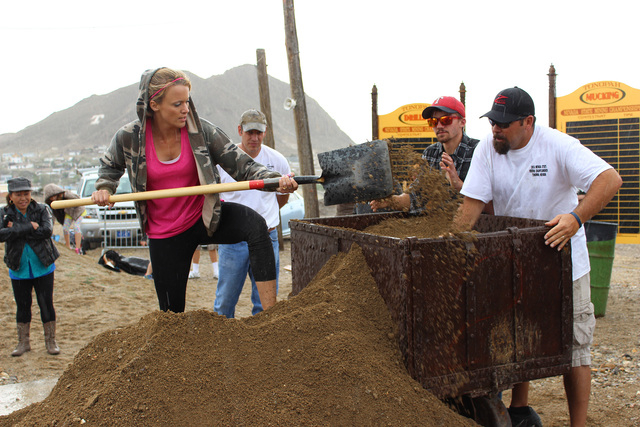 One of the ways the town celebrated its heritage during Jim Butler Days was by mucking things up during the 2014 Nevada State Mining Championships.

There were 34 muckers, 11 of whom were women, and twelve jackers coming from many states. Two muckers in the top three were from Pahrump. Not even the brief rainfall could keep the die-hard competitors away from competing. The rain just made the mucking contest even more interesting because the dirt was heavier and the participants had to put out more effort.

James Eason was the fastest mucker. In this contest, the fastest to fill a mining cart with dirt using a shovel is the winner. Eason had the cart full in 2:04.24 and became the winner of the mucking competition, followed by Daniel Falkowski (2:32.98). Jesse Pattridge, from Colorado, was third with a time of 2:38.56. The winner took home the $600 of the first prize and a silver shovel as trophy, the second contestant earned $300 and the third one $150.

When the mucking men’s singles were over, it was time for the team competition. This contest was hard-fought between two teams paired by random. Pattridge and Steve MacDonald won a very close struggle against Eason and Falkowski. The first team took 51.53 seconds to fill the wheelbarrow and the second one 52.46. There were ten teams in total competing for one of the three prizes of $300, $200 and $100 for each member.

For the women, Toni Wombaker crushed her five opponents and mucked her way to a new state record with a time of 2:01.41. The top lady is married to Tim Wombaker, principal at Rosemary Clarke Middle School. Along with the title she took home the $300 check. In second place was Janina Easley, whose time was 3:15.78. Her time was 1:14 more than the winner. Cassandra Selbach is also from Pahrump and won third with a time of 3:39.28.

In the team competition, Selbach became Wombaker’s partner in the mucking team competition and they worked together towards the victory (1:09.93). Amy Dowers and Kacie Dowers took the second place (1:15.41), Janina Easley and Elaine Vail were third (1:21.40) and Emily and Khris Campos took 4th (2:36.31).

After the mucking contest, the business switched from dirt to granite. The hand drilling competition had twelve participants that sweated blood to achieve the silver hammer trophy. In this contest, each person uses a sledge hammer to bore a hole using a steel bit, which is powered by pure muscle.