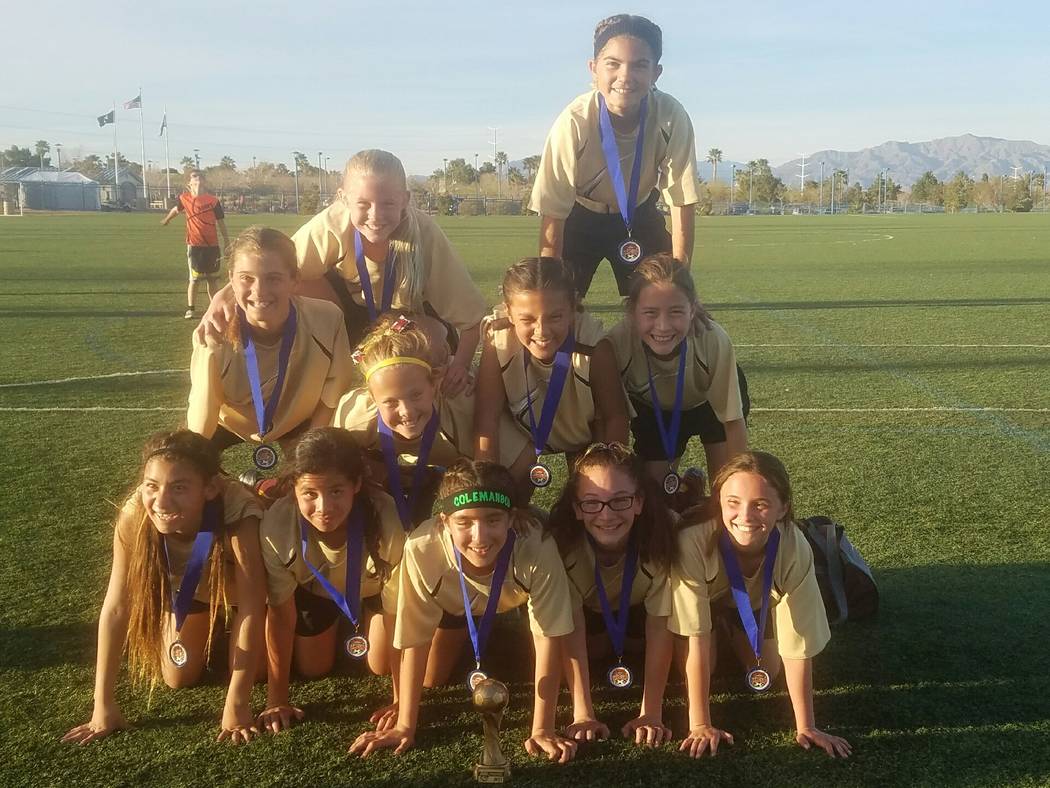 The Pahrump 05 Trojans club soccer team played in the Las Vegas Junior Cup Tournament on March 10-12 and and took first place out of 10 teams.

The tourney is put on by the Nevada Youth Soccer Association and is the largest U14 tournament in the state.

“We went into the tournament as a gold level team, ranked 20th in the state,” coach Danny Coleman said. “We played the the 9th and 20th ranked teams from Arizona, who were Premier and Premier Elite level and the number two ranked team from Utah, who is Premier Elite.”

The team plays in the Silver State Girls Soccer League.

Coleman then said they played in the championship game against the number one ranked team from Nevada, who is also ranked Premier Elite and won.

“We were the lowest ranked team in the whole tournament,” he said. “We won the championship game 2-1. We were the only team to score on the number 1 team all tournament, who shut out all their teams on the way to the championship game. We scored 9 and allowed 3 in four games. I think we had an edge on all the teams because no one knew who we were, we came out of nowhere.”

Coleman said he only had one tournament win this season.

“Online I could look up every game and tournament each team played and how they placed,” Coleman said. “ It was a shock to a lot of people, even parents from our team said all we hoped for was to be competitive in the games. We started this club team in January, not ranked in the bronze level. With the two tournaments we’ve played, we are 7-1-0, with two championships, which moved us from bronze to the Premier level and we are now ranked number 3 in the state.”

Coleman plans to keep going in the league and his goal is to win the Mayors Cup Tournament in Las Vegas next year, which is in February and has over 400 teams competing at different age groups from all over the country.

There is one other Silver State girls team from Pahrump, the U15 team called Pahrump United, which is coached by Shawn Holmes.

For more information on the Silver State Girls Soccer League, go to https://home.gotsoccer.com/rankings/club.aspx?ClubID=9671