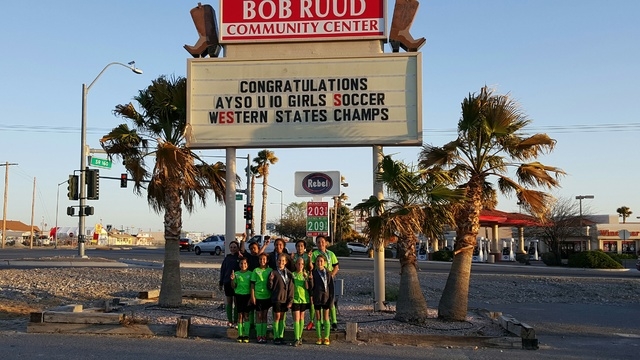 On Sunday, the team traveled to Bullhead City, Arizona for the Western States Finals Tournament and returned home as champions.

The team, Pahrump United, bested a Hillsborough, California team from the San Francisco area in the first match and defeated a tough Downey, California team to become the AYSO’s “Best in the West.”

Following the game, Coleman said he had a few reservations entering the championship game on Sunday.

“I was nervous about a week prior to this tournament,” he said. “I was happy that we were there and I told the girls that everyone was proud of them in their accomplishments during the regular season. The first game we played was won by a score of 8-1. The score for the championship game was 3-2 in overtime. We were playing Downey, California and their game to get to the final round was won by a score of 8-0.”

He figured, why tinker with something that’s been proven to see results?

“I prepared the team the same way I did during the regular season,” he said. “We wanted to work on things that we needed to work on and it’s all about repetition. When we came out for the championship game on Sunday, the other team came out so strong and I jokingly said to my coaches that second place wasn’t that bad.”

Though Pahrump United triumphed after all was said and done, the victory came with much drama, as the match went into overtime.

“We scored first in the championship round,” Coleman said. “We stopped them in all of their attempts, and then we scored. They scored and we scored again and went into halftime by a score of 2-1.”

The Downey team notched another goal right after the third quarter began and tied the score 2-2.

It remained that way until time ran out.

The winning goal was set up by Coleman’s daughter, Paris, on a corner kick.

“She kicked the corner kick to my middle to my forward and while the ball was in the air, she tapped it in with her left foot,” he said. “This was a very historic win for us. Not only for our town, but for the area that we represent.”

Aside from sheer jubilation, Coleman said the team collectively felt a sigh of relief after all was said and done.

Coleman has good reason to believe the team will be successful next season, as most of the players are expected to return.

“The team will basically remain intact, but I think there’s one girl who is going to another sport,” he said. “As far as I know, everybody is moving up and they still want to play together. We will play with more players next year, so I will be able to pick up more top players next year to help accompany this team.”

After coaching girls soccer for the past six years, Coleman said his current team ranks among the best he’s seen during his tenure.

“This team seems to have a lot of powerhouses,” he said. “You can call them game-changing players. There are several girls on this team who are the best I’ve ever seen. When you accompany that with other players that are just as good, it makes for a great combination to have.”

Additionally, Coleman said he suspects the victory will draw interest from other would-be soccer players in the community.

“I would hope this big victory would spur other girls to play AYSO soccer,” he said. “If anyone is having any doubts about playing, they should just check us out. In light of this big victory, I hope it will convince more girls to sign up and play. We could very well have a great chance of doing well next year.”