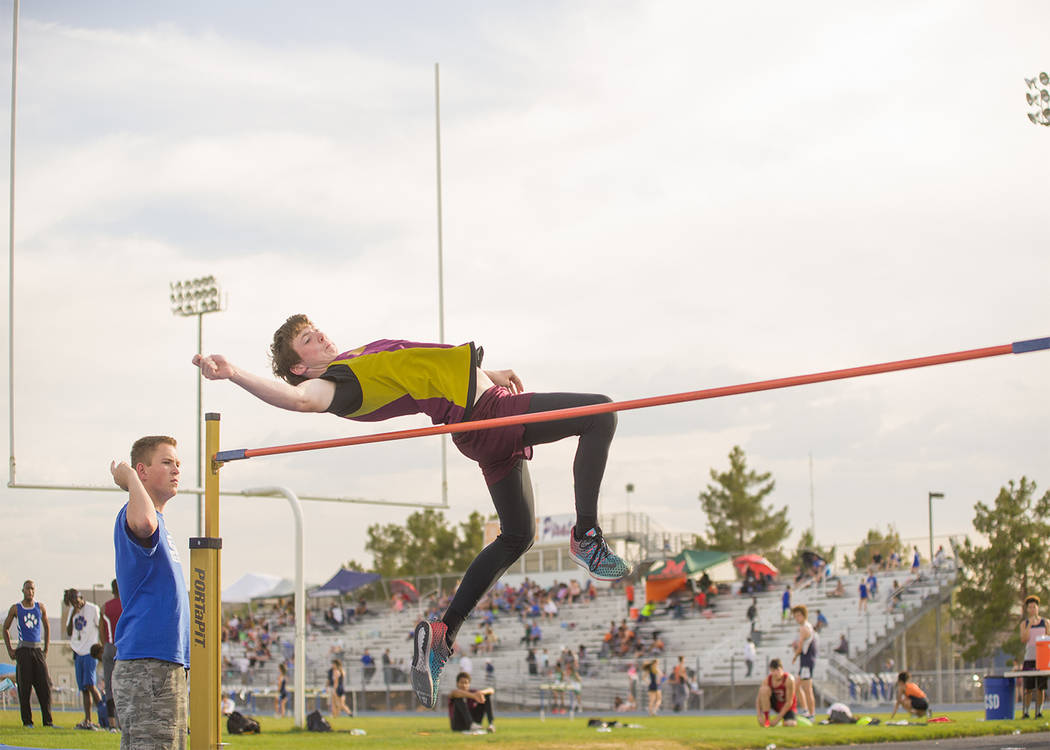 Skylar Stephens/Special to the Pahrump Valley Times Pahrump Valley junior Chance Farnsworth's high jump of 6 feet, 3 inches last week at Coronado High School was the third-best effort in the state this season and No. 2 in Class 3A. 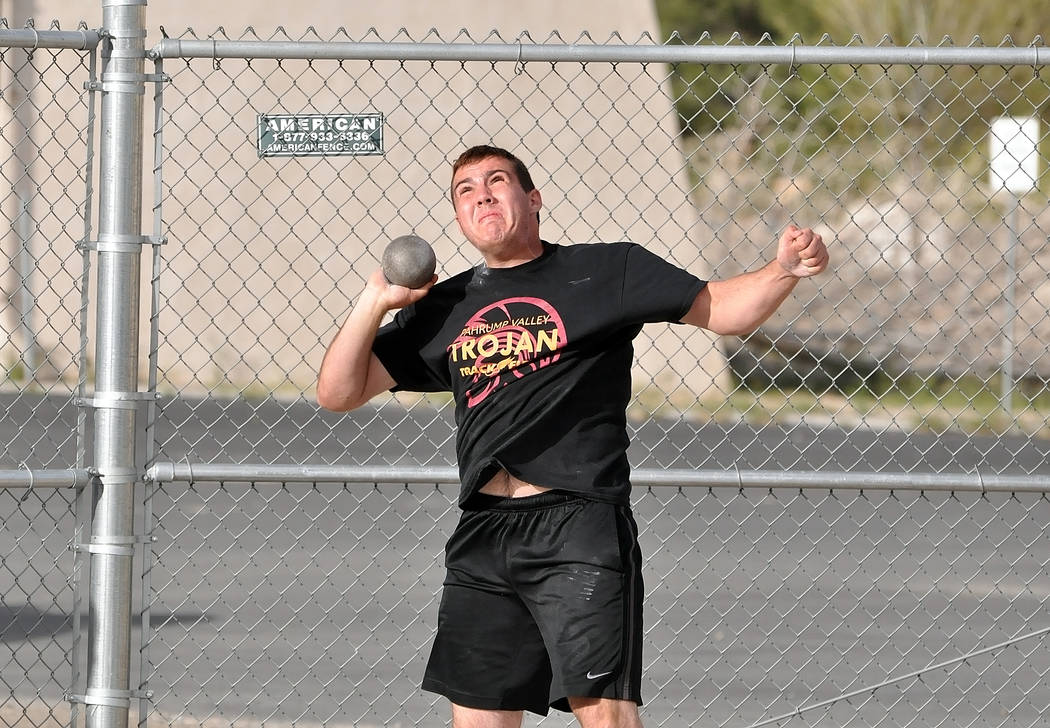 Horace Langford Jr./Pahrump Valley Times Jeremy Albertson, shown with the shot put last year, has yet to surpass his personal record in the discus, but his throw of 155 feet, 9 inches last month is the fourth best effort in Nevada this spring and the top throw among Class 3A athletes. 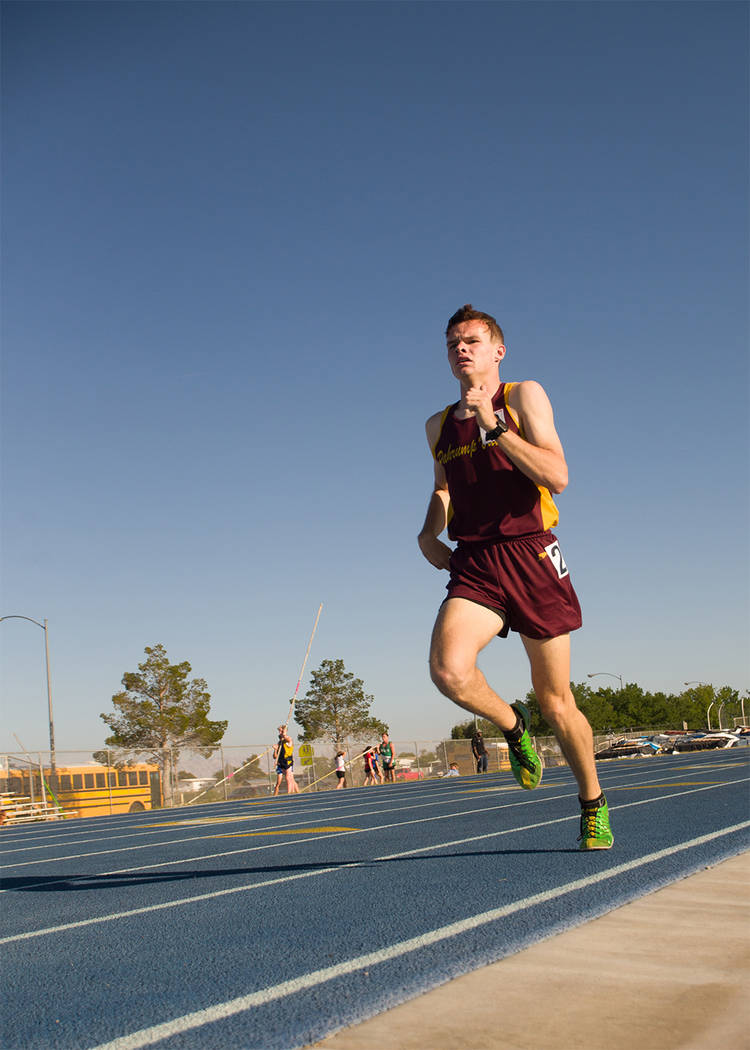 A glance at the top track and field performances among Class 3A schools shows Pahrump Valley athletes are holding their own with some of the best heading into April. But three of them find themselves on an even higher level.

Seniors Bryce Odegard and Jeremy Albertson and junior Chance Farnsworth have earned places among the top five performances in individual events in the entire state.

Odegard’s time of 2 minutes, 0.31 seconds in the 800 meter March 17 at the Liberty Invitational is the top time in that event for the season in Nevada.

“Actually it was a quite awful day to run,” Odegard said. “I was going out with the intention of qualifying for a meet in California. I wanted to hit 1:58.7, then I later learned I could use times from last year and I had already hit that last year. So I didn’t get that time, and it was an awful day. But I went out there motivated, and that was the result.”

Pahrump Valley track coach Fred Schmidt took a moment to try and come up with something new to say about Odegard.

“Bryce … man,” he started with a chuckle. “I think what I’m seeing with him right now is he wants to pull his team with him. He realizes he’s good at what he does, but he’s not a head case about it.”

A head case probably would not have become the best in 3A in an event he does not usually run.

“A couple of weeks ago our coaches had everybody on the team lined up and said we’re just going to run a 400 and see what everyone can run,” Odegard recalled. “I ran 51.5, or something like that. And that was exactly one second off the school record. So (assistant coach Mike) Colucci goes, ‘Hey, you should run the 400 and see if you can get the school record.’ I ran 51.29, and that’s number one in 3A right now.”

For, Albertson, his throw of 155 feet, 9 inches ranks fourth in the state and first in 3A, but it’s not his personal best. That was a 161-3 last year, and until he blows past that Albertson is unlikely to be satisfied.

“I really want to throw 180 this year,” he said. “You don’t get much better after 180. It’s hard to improve because there’s not a lot to fix in your throw when you get there.”

It’s not easy to improve on a 6-3 high jump either, but Chance Farnsworth is going to give it a shot. The junior hit that mark last week, and it was good for third in the state and second in 3A.

“I was feeling good,” Farnsworth said. “I wasn’t sure anything good would happen, but after I cleared 6-2 I felt I could go higher.

Farnsworth and his sister, Jersey, are working with ex-UNLV and NFL quarterback Randall Cunningham.

“He is really going to work us hard,” Farnsworth said. “The first day of training I was sore everywhere! Mr. Cunningham is going to be a good teacher. He has so much sports knowledge. I think I’m going to learn a lot from him.”

“He sees something in Chance, and I don’t disagree with him,” Schmidt said.

Internet sites such as athletic.net report top times and distances from all over.

“A lot of these kids are well aware of that site, and they use it as a motivational tool for themselves to see where they’re at and checking the competition up north,” he said. “That site gives them an idea of what they’re up against.”

And in some cases, it gives the competition up north an idea of what they’re up against as well.