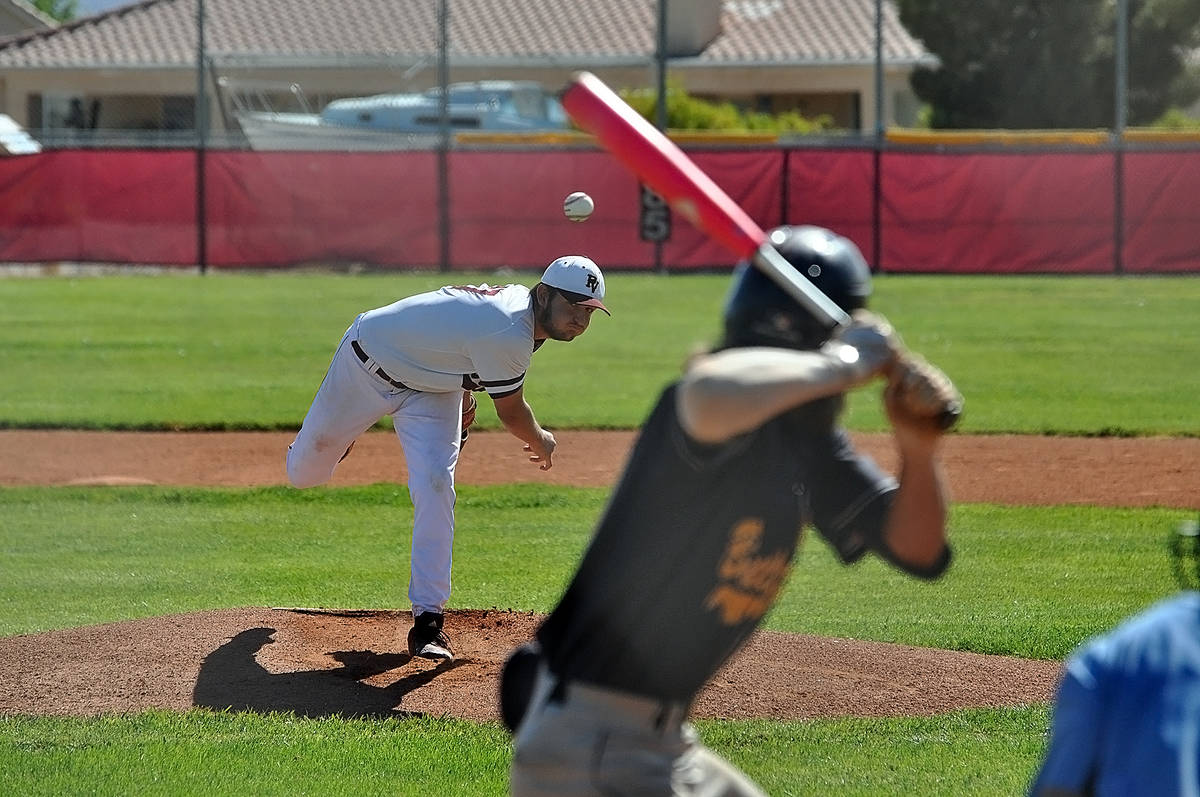 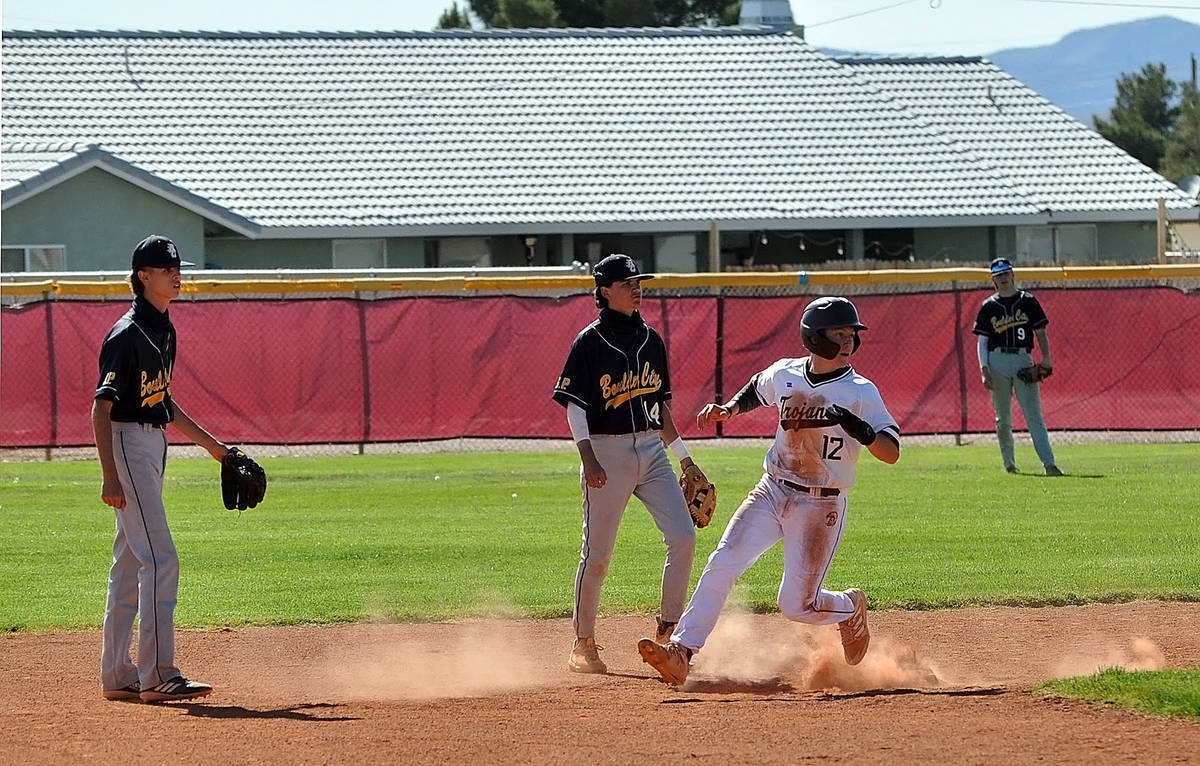 Horace Langford Jr./Pahrump Valley Times Sophomore Kyle McDaniel pulls into second base on a wild pitch during the first inning of Pahrump Valley's 1-0 loss to Boulder City on Thursday. No other Trojan reached second base the rest of the game as Eagles senior Troy Connell threw a no-hitter for a 1-0 win.

But with no margin for error, a 2-out single in the top of the seventh by sophomore Isaac Gibson was all it took for the Eagles to come away with a 1-0 victory at Rod Poteete Memorial Field.

Connell set down the Trojans in order in the seventh to complete the no-hitter, allowing just a walk to Zack Cuellar in the first and a walk to Austin Sandoval in the sixth.

“We faced him before, and he’s got a good slider,” Pahrump Valley coach Brian Hayes said of Connell. “We set up the slider machine and had the slider going, but the problem was he started with his fastball. So our kids were basically playing into his slider and looking for his slider, and then they’re down 0-2 and then he would throw a slider off the plate.

“It was strike one and strike two and then all of a sudden he puts us away with the slider. We kept telling them, hey you’re going to see the fastball first, and then the slider is a put-away pitch. We’re still young and trying to learn that and understand that.”

Connell’s performance overshadowed an outstanding effort by Riding, who allowed 4 hits and didn’t walk anyone. But Riding has been just short of brilliant throughout this short season for the Trojans. In 17 2/3 innings, the senior has allowed 9 hits and 3 walks while striking out 21.

“Jake has been lights-out,” Hayes said. “We kind of compare him to Jacob DeGrom. We might not get him the run support, but we’re going to get strikes. He’s not going to walk a lot of guys, he’s going to go right after hitters, and he’s going to keep us in every game.”

Riding didn’t need much help, but when he did, he got some from right fielder Zack Cuellar, who chased down four fly balls, three of which had him running.

“Zack is surprisingly good in right,” Hayes said. “It doesn’t look like he can cover a lot of ground, but he gets to the balls.”

The teams combined for one error, and Hayes gives Riding some of the credit for that, too.

“Our defense played phenomenal that game,” Hayes said after a Saturday doubleheader at Bishop Gorman. “I think having him on the mound is exciting because they know he’s going to throw strikes, and they’re going to be ready to make plays.”

The Trojans were short-handed, as senior Jalen Denton was injured the day before against Clark.

“Jalen popped his ankle against Clark in the first inning,” Hayes said. “He tripled to right and then got in a rundown between home and third and popped his ankle out. We thought it was fractured and he would be out for the year, but it sounds like he might be able to come back. We’re hoping, but honestly I’m going to play like we’re not expecting it.”

Bishop Gorman JV 10-14, Pahrump Valley 3-2: Sophomore Kyle McDaniel drove in 2 runs and classmate James Metscher reached base three times, scored twice and stole two bases for the Trojans in Saturday’s opener in Las Vegas. McDaniel went 2 for 3 and drove in a run for the Trojans, who committed 4 errors leading to 8 unearned runs, in the second game.

“Our biggest thing today was we have to find some offense,” Hayes said. “Our offense has been struggling, and I don’t know if we really found an answer. The one guy that did start turning it around was Scotty (Hirschi), and then he hurt his ankle so we’re hoping that’s not going to be anything serious.”

Hirschi was the starting pitcher in the second game and took a line drive off the bat of Lucas Boesen and limped off the field. He was looked at briefly by a trainer but left under his own power.

Virgin Valley 11, Pahrump Valley 8: McDaniel doubled twice, drove in 4 runs and scored three times, while Riding went 3 for 4 with 2 RBIs and 4 runs, but it was not enough against the Bulldogs on Monday in Mesquite. Four Trojans errors led to four unearned runs for the Bulldogs as Pahrump Valley’s losing streak reached four games. The Trojans are 5-7.