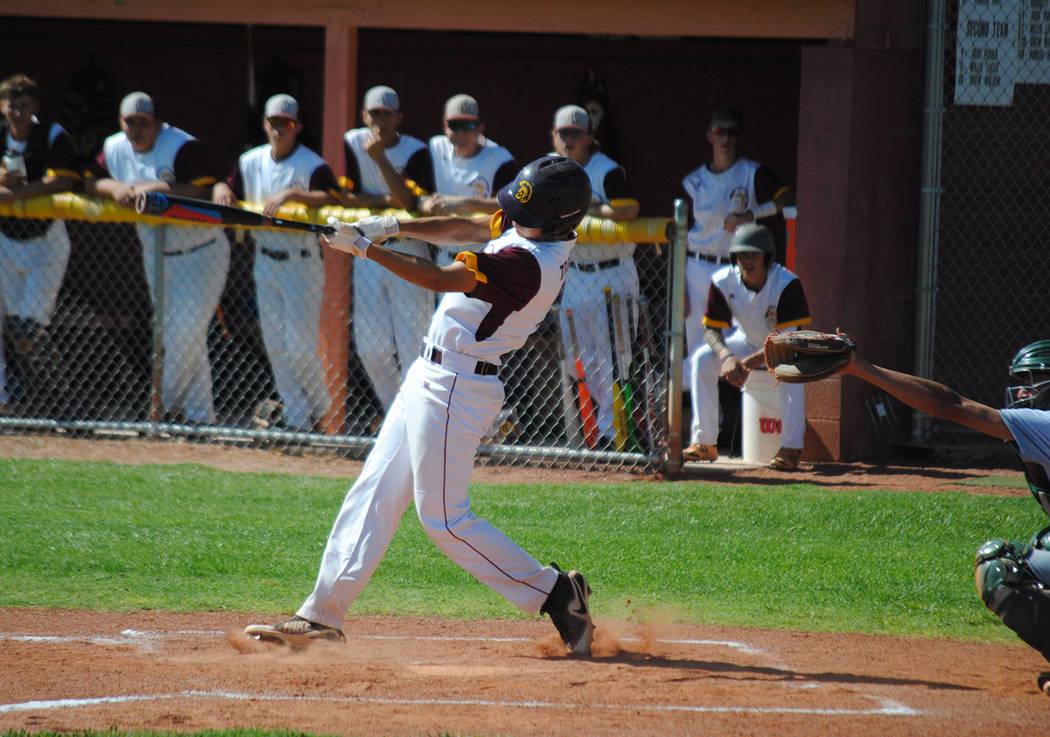 Charlotte Uyeno/Pahrump Valley Times Junior Dylan Grossell went 2-for-3 with a double and two RBIs, but Pahrump Valley lost 6-4 to Elko in the losers bracket final of the Class 3A state tournament last Friday in Reno. 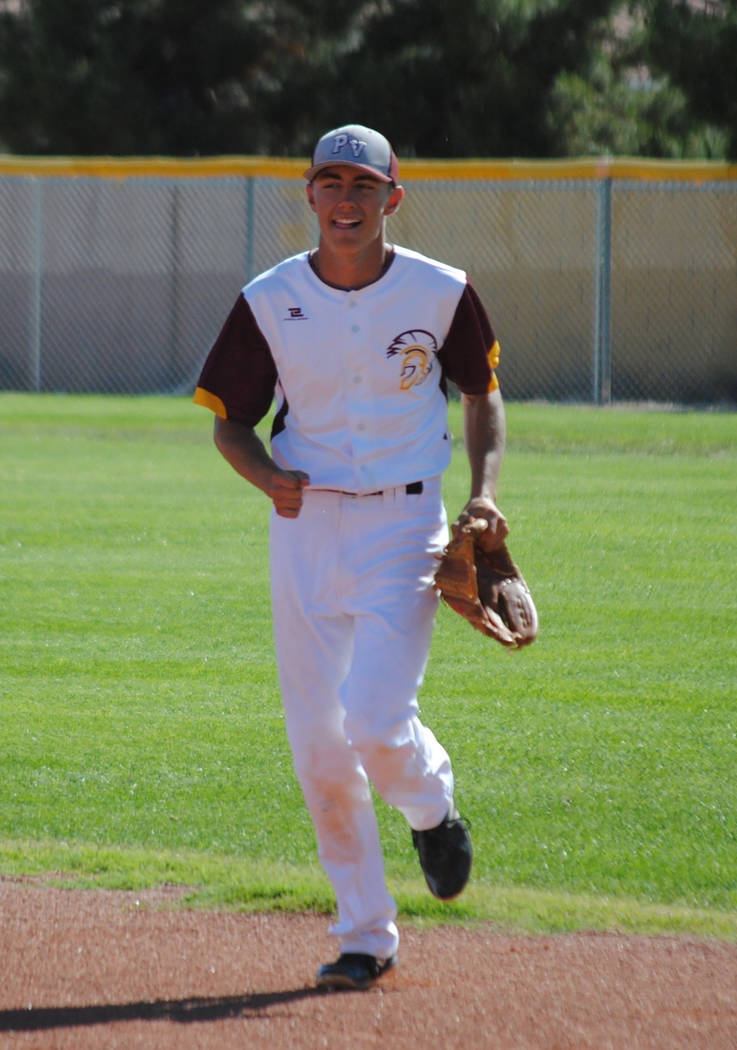 Charlotte Uyeno/Pahrump Valley Times Senior Bradda Costa comes in to pitch for Pahrump Valley during a May 2 game against Sunrise Mountain in Pahrump. Costa was the winning pitcher as the Trojans defeated Boulder City in the Class 3A state tournament.

The Pahrump Valley baseball team’s bid for a spot in the championship game came up short Friday when the Trojans fell 6-4 to Elko in the losers bracket final of the Class 3A state tournament at Galena High School in Reno.

Dylan Grossell was 2-for-3 with a double and two RBIs for Pahrump Valley, which scored twice in the top of the seventh and brought the potential tying run to the plate, but Elko’s Brycen Kelly closed it out for the Indians, who defeated the Trojans twice in the double-elimination tournament.

“There was a missed obstruction call in that inning,” Hayes said. “We would have second and third with one out.”

Hayes said the Bradda Costa hit what should have been a double to right field with Joey Koenig on first base. But Koenig collided with the shortstop. No call was made, and Koenig was thrown out trying to get back to second base. Instead of runners on second and third with one out, the Trojans were down to their last out.

As has been the case often, the Trojans spent much of the game playing from behind. Elko took a 4-0 lead after one inning.

“We told them that at some point you have to get stuff done earlier in the game,” Hayes said. “We had a lot of opportunities to score runs, and we didn’t.”

Earlier in the day, the Trojans recorded one of the sweetest victories of Hayes’ six-year tenure as Cyle Havel escaped a bases-loaded jam in the bottom of the seventh inning to preserve a 9-5 win over Boulder City in an elimination game.

The victory was Pahrump Valley’s first over Boulder City since Hayes began coaching at the school. The Eagles had held a 9-0-1 advantage in the series, including two wins the previous week in the 3A Southern Region Tournament.

“That was the big game for us,” Hayes said. “That was the game I was looking at, because that could be a program-changer. You could still kind of feel like we were waiting for Boulder City to come back and beat us even though we were up 9-4 going into that last inning.”

Pahrump Valley scored twice in the top of the seventh to build that 9-4 lead. Boulder City loaded the bases with no outs in the bottom of the inning before Havel came on and got consecutive strikeouts. A walk to Teddy Lobkowicz forced in a run, but Havel retired Rhett Armstrong to end the game.

Costa pitched into the fifth inning to record the win for the Trojans, allowing seven hits while striking out three, walking three and hitting three.Willie Lucas was 2-for-3 with a double and an RBI, and Garrett Lucas was 2-for-4 with an RBI for Pahrump. Havel drove in two runs, while Tyler Floyd scored twice.

In the tournament opener on Thursday, Garrett Lucas was 3-for-3 with a run scored and Anthony Charles went 2-for-3 with an RBI, but the Trojans were beaten 8-3 by Elko.

Again, the Indians led early, this time 4-1 after three innings. The Trojans closed to within 4-3 in the fourth, but Elko scored twice in the fifth and twice in the sixth to put away the game.

“They were a good baseball team but definitely beatable,” Hayes said. “We felt our chances were pretty good with Garrett on the mound, but he didn’t look like Garrett.

“We gave them a lot of their runs. We walked some guys, we made some errors. We told the kids if they could pitch and play defense then we had a really good shot at the tournament, and ironically the only game we really did that was the Boulder City game.” 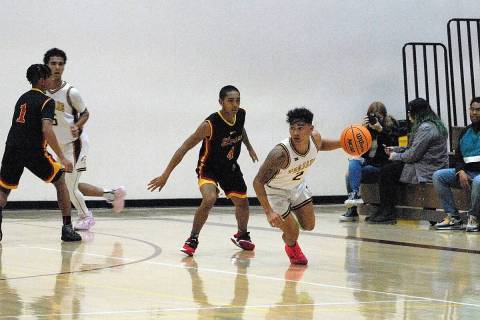 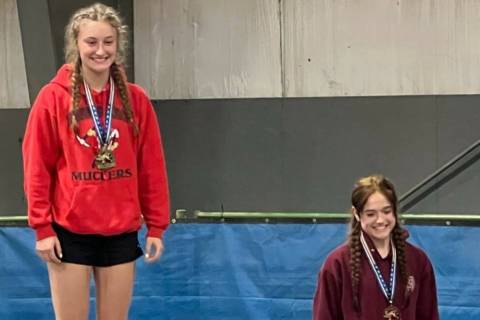 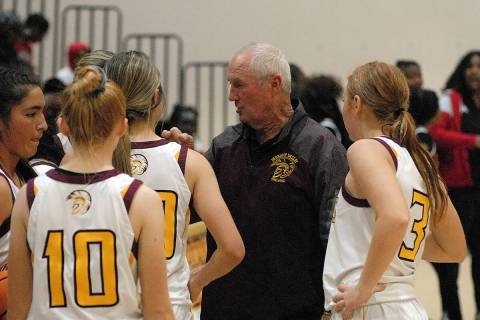