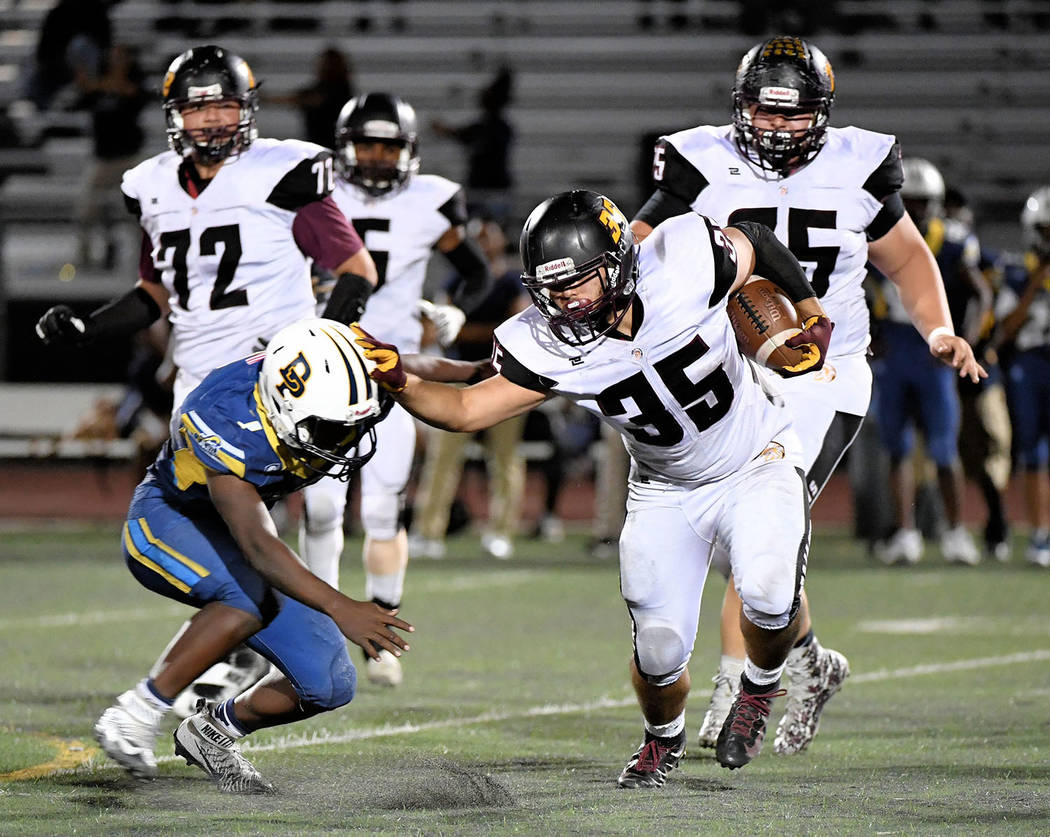 Peter Davis/Special to the Pahrump Valley Times Senior running back Nico Velazquez rushed for 140 yards and four touchdowns Friday night as Pahrump Valley came from behind to edge Valley 36-33. 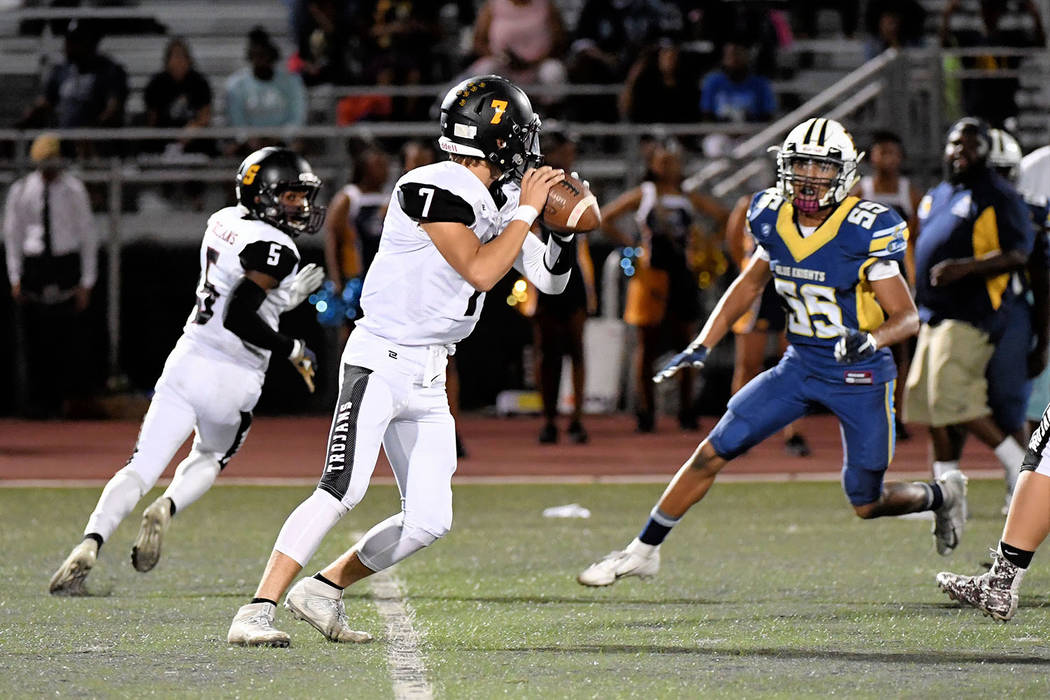 Peter Davis/Special to the Pahrump Valley Times Dylan Wright prepares to throw to Casey Flennory during a game against Democracy Prep. Wright completed his only pass Friday night for a 60-yard touchdown to Joey Koenig in Pahrump Valley's 36-33 win over Valley.

The Valley High School football team had a potential playoff berth at stake when the Vikings hosted Pahrump Valley on Friday night.

The Trojans, meanwhile, had little to play for, having already locked up the Sunset League title — thanks to Valley’s loss the week before — and were motivated only by the chance to finish the league season undefeated.

But after a sluggish start, they also played as if their playoff lives were on the line.

Senior running back Nico Velazquez rushed for 140 yards and four touchdowns, the last one a 4-yard burst with 36 seconds remaining in the game, to lead Pahrump Valley to a 36-33 win over Valley in Las Vegas.

“We were expecting to come in here and sweep them,” sophomore quarterback Dylan Wright admitted, likely thinking of Valley’s 40-point loss the week before to a Del Sol team the Trojans defeated the week before that. “It didn’t exactly happen.”

Not even close. The Trojans trailed 20-14 at halftime, the first time they were behind at the half since Week 2 against Virgin Valley. And the Vikings weren’t done, opening the third quarter by putting on a masterful 13-play, 80-yard drive that milked almost eight minutes off the clock to take a 27-14 lead.

But the Trojans have been a second-half team for most of the year, and they did what they do in tough situations: stick to their game plan. Velazquez returned the ensuing kickoff to the Trojans’ 33 and then had his number called on five consecutive plays to put Pahrump Valley inside the Valley 40. Four plays later, he took a pitch 7 yards for a score to pull the Trojans within 27-20.

Then came the play that changed everything. With the ball and a touchdown lead, the Vikings opened their next drive with a run up the middle. But the ball didn’t go with the runner and was sitting on the turf behind the Valley blockers. Pahrump Valley senior Dylan Grossell pounced on it at the Valley 20. Two Velazquez runs and a Casey Flennory conversion run later, and the Trojans had their first lead since it was 6-0.

That first score also was set up by a Valley fumble, that one recovered by Velazquez, who scored from 3 yards out to give the Trojans the early lead.

But if the Vikings were demoralized by the quick score after a turnover, they hid it well. For the second time in the half, they put together a sustained drive, going 60 yards on 12 plays in 6 minutes, 30 seconds, overcoming two penalties that created a first-and-goal from the Pahrump Valley 25. And when Valley junior quarterback Jarrett Zibert threw his fourth touchdown pass of the game, a 10-yarder to Larry Perry, the Vikings had a 33-28 lead with 5:22 on the clock.

As is their habit, the Trojans didn’t panic. Or throw. Instead, they calmly marched 67 yards on 10 plays, highlighted by a 22-yard run by Flennory, before Velazquez’s winning score.

“We know what we can do,” Velazquez said. “Our team are fighters.”

“It couldn’t have finished any better considering how we started,” Pahrump Valley coach Joe Clayton said. “They’ve been resilient like that all year. I think a lot of it has to do with how many close games we’ve had. We’ve had so many close games that we’ve lost, and now we’ve finished one, which going into the playoffs I don’t think you can have it any better.”

Flennory finished with 90 yards on 13 carries, while Joey Koenig rushed seven times for 66 yards. Koenig was on the receiving end of Wright’s only pass, a 60-yard touchdown bomb late in the first half that briefly forged a 14-14 tie.

The Trojans (6-3, 5-0 Sunset) get a week off while the first round of the Class 3A Southern Region playoffs takes place Thursday. Del Sol (5-5) will travel to Boulder City (6-3), with the winner making the trip to Pahrump on Nov. 2. In the other half of the bracket, Cheyenne (8-2) will host Sunrise Mountain (3-6) with the winner heading to Overton for a Nov. 2 date with Moapa Valley (9-1).

For more coverage, go to the Trojan Football Notebook on pvtimes.com