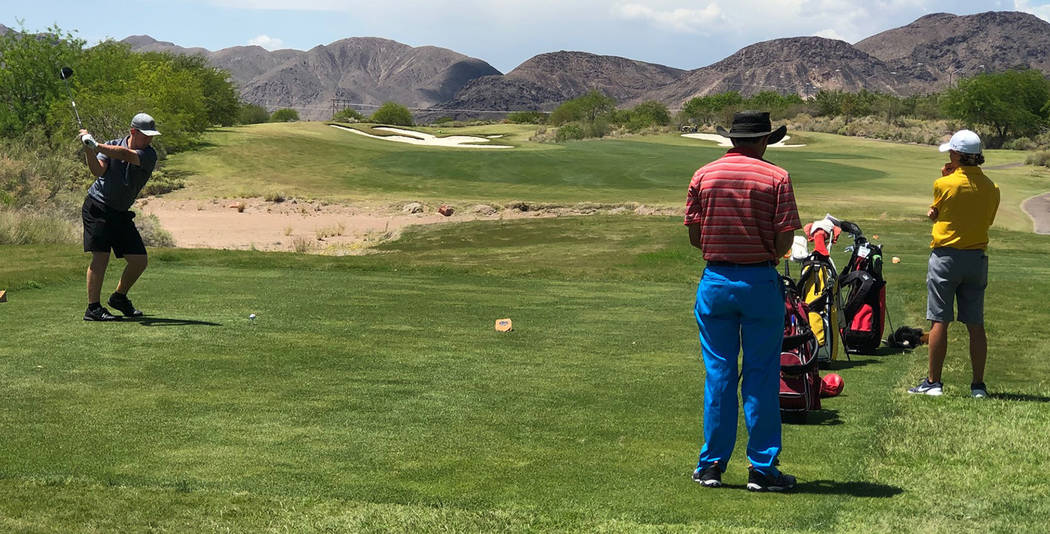 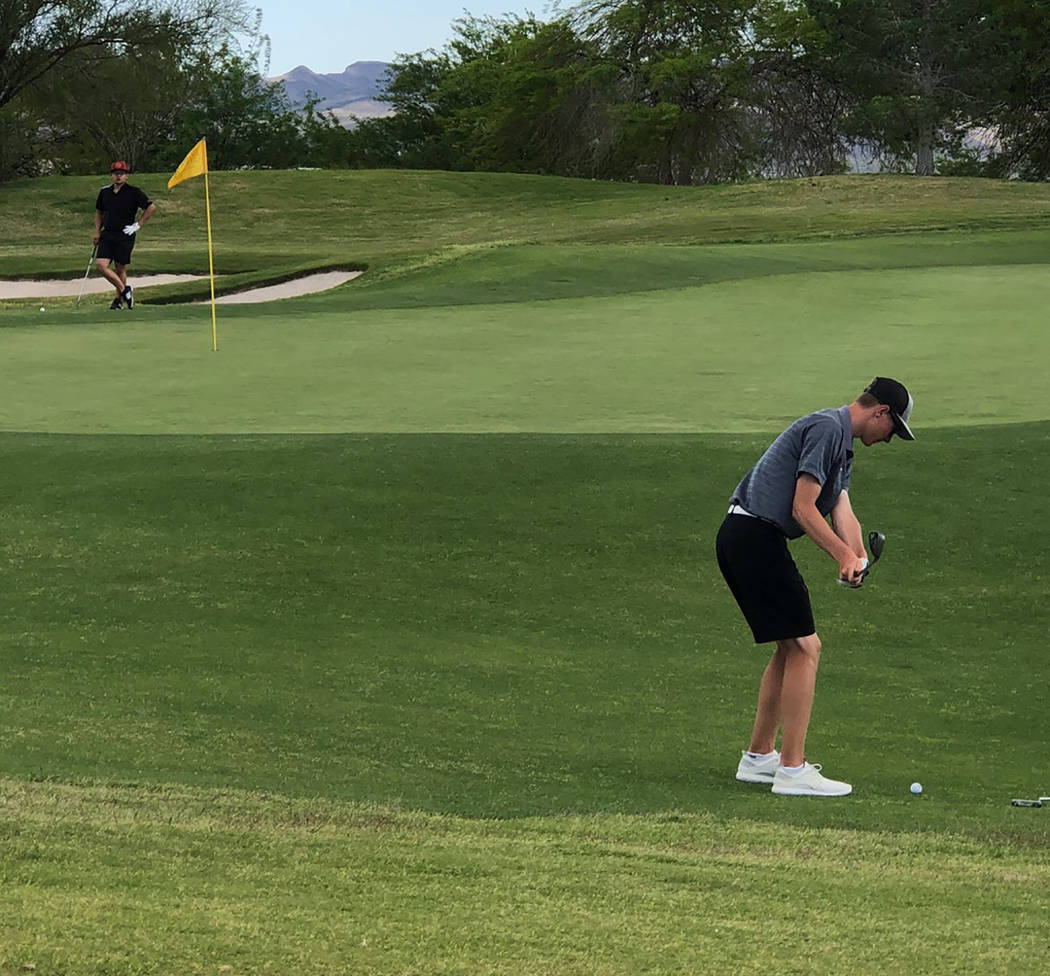 Tom Rysinski/Pahrump Valley Times Kasey Dilger chips onto the green at the 13th hole of the Class 3A Southern Regional Championships on Tuesday in Boulder City. Dilger fired an 80, the best round among Pahrump Valley golfers during the tournament. 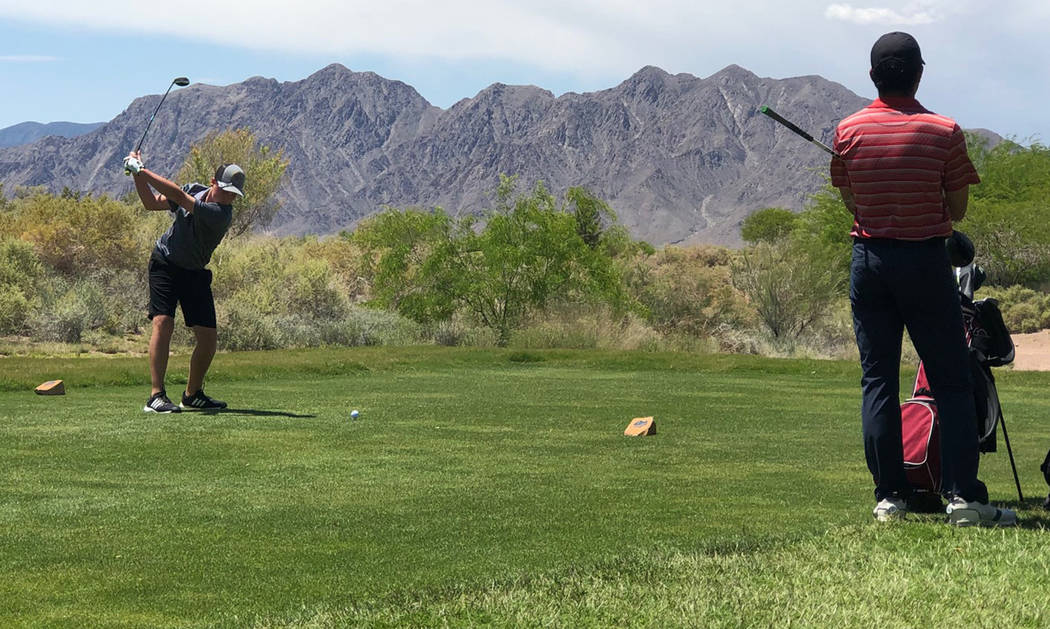 Tom Rysinski/Pahrump Valley Times Kasen Moore of Pahrump Valley opens his second round at the Class 3A Southern Regional Championship on Tuesday in Boulder City. 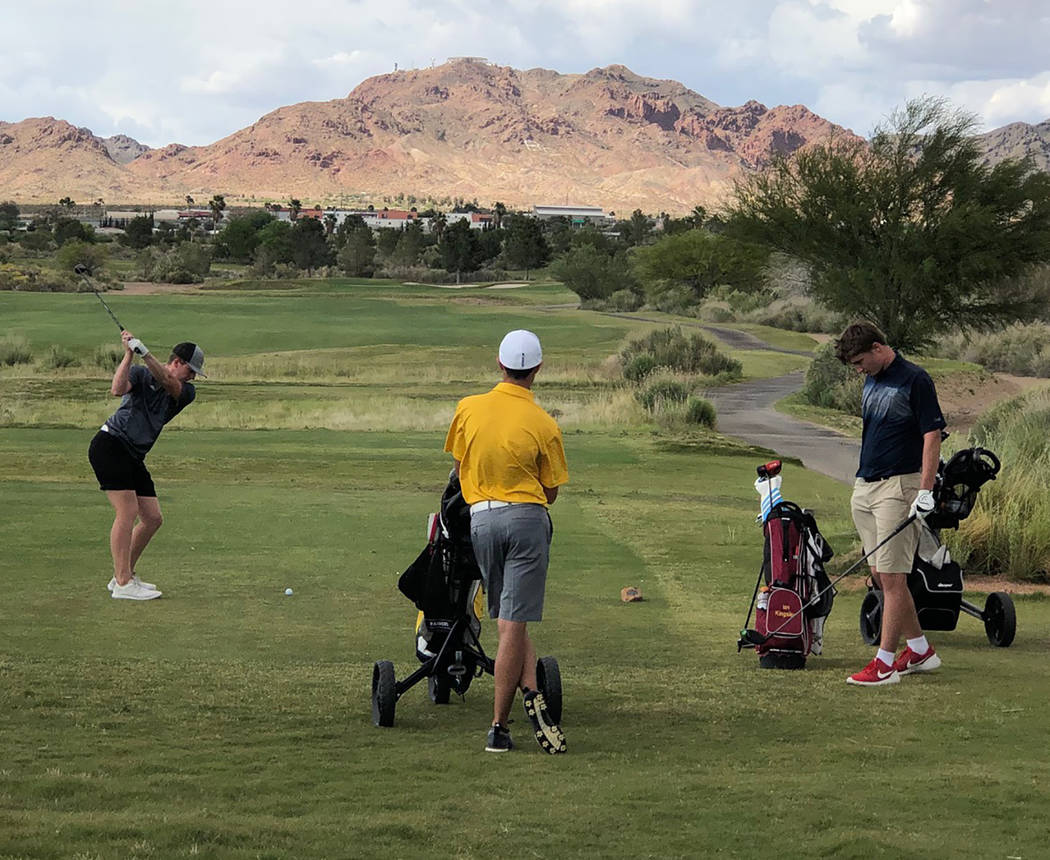 Tom Rysinski/Pahrump Valley Times Pahrump Valley's Ian Kingsley, left, tees off on No. 15 at the region championships Tuesday in Boulder City. Boulder City's Jace Waldron is at the center, and Angel Greer of Del Sol is at right. 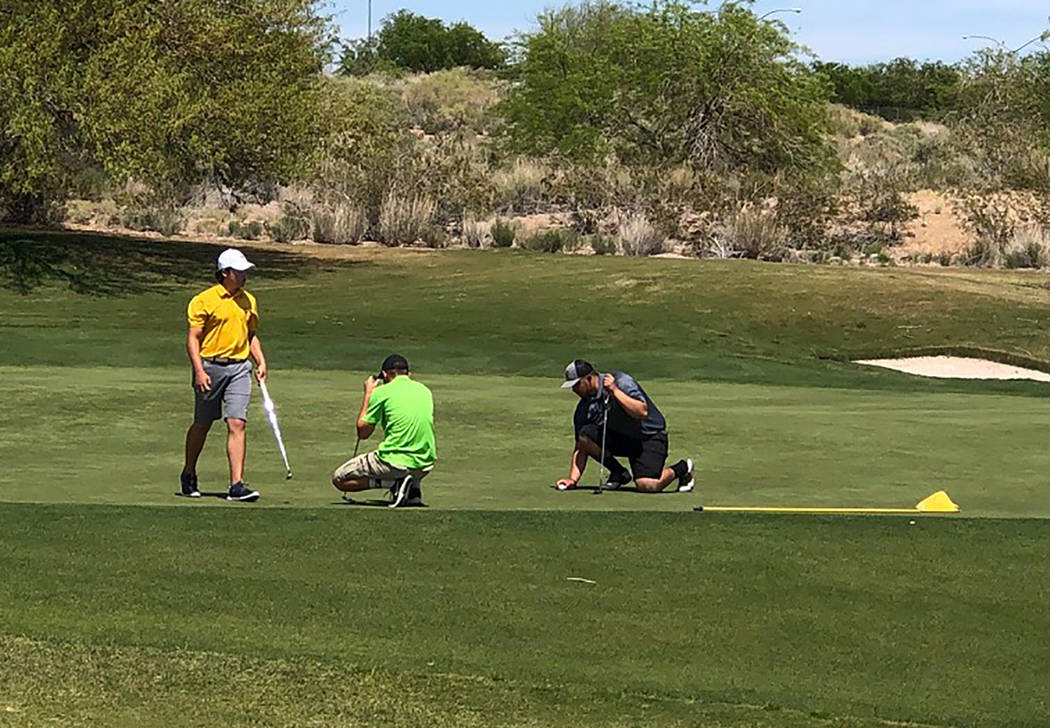 Tom Rysinski/Pahrump Valley Times Pahrump Valley's Caleb Sproul eyes his putt on the green at No. 9 with Kyle Carducci, left, of Boulder City and Jeron Dalton of Virgin Valley at the Class 3A Southern Regional Championships on Tuesday in Boulder City. 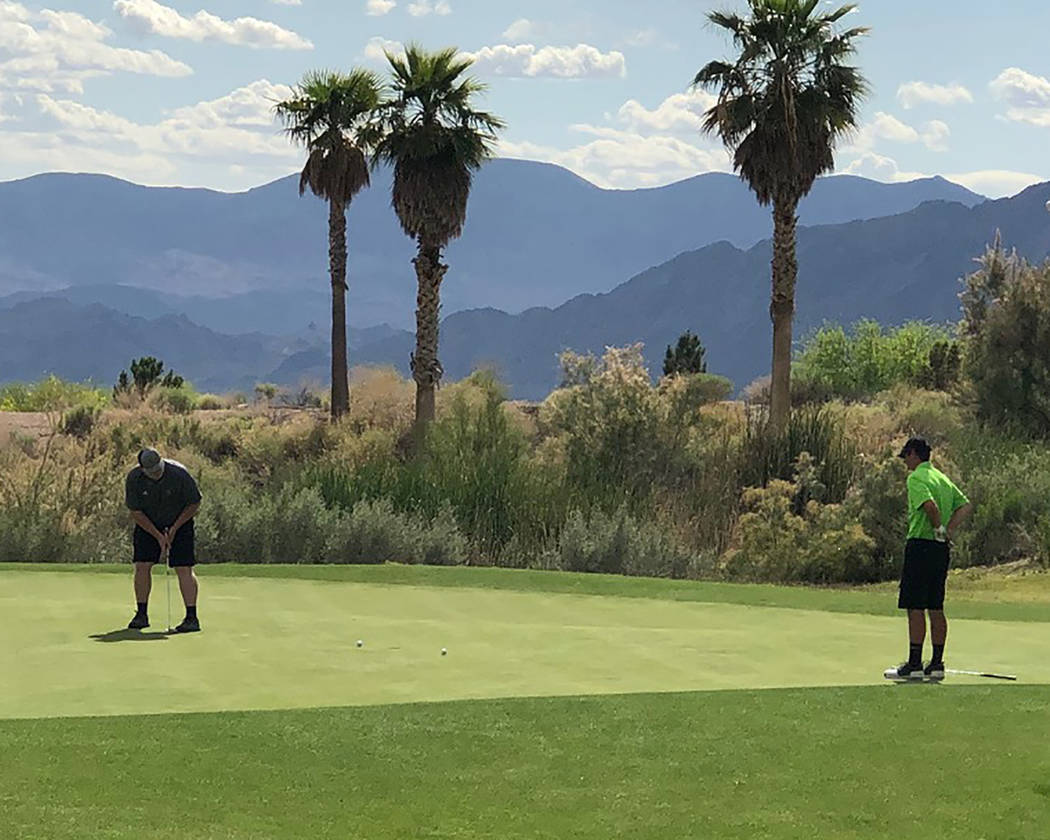 That was the case Tuesday at the Class 3A Southern Regional Golf Tournament, as every competitor advanced.

Pahrump Valley, led by Koby Lindberg’s seventh-place 168, finished second to Boulder City in the team competition, 651-709, but they were the only two teams in an event in which the top three advance to next week’s state championship. Moreover, the top six individuals not on one of the qualifying teams move on; there were only five such golfers in the field.

So with literally nothing to play for other than the trophies for team and individual champions, the pressure was off.

For the Trojans, this was especially true on the second day, as the Eagles held a commanding 31-stroke lead after the first round at Boulder City Golf Course.

Moving down the road to Boulder Creek Golf Club, Lindberg and Kasey Dilger thrived on Day 2. Lindberg shaved 6 strokes off his first-day score to record an 81, while Dilger, who shot 93 on Monday, roared back with an 80 on Tuesday.

To put those scores in perspective, Lindberg and Dilger recorded better scores Tuesday than any other golfers on either day of the tournament except for co-champions Jared Smith of Western and Blake Schaper of Boulder City.

Lindberg played in the same group with Smith and Schaper and had a front-row seat to their battle for first place.

Smith, the defending Class 3A state champion, took a 5-stroke lead after a first-round 71 but Schaper, the defending region champion, fired the same score Tuesday to forge a tie, 17 strokes clear of the field at 147. Lightning got in the way of a playoff.

Lindberg had a single birdie in each round; the difference Tuesday was no bad holes. After three double bogeys and an 8 on the par-4 No. 9 at Boulder City, Lindberg turned around and had nothing worse than a bogey at Boulder Creek, making par on seven holes and getting his birdie on the par-3 No. 17.

He was steady on the front nine, with no birdies and no doubles for a 5-over 41 on Boulder Creek’s Eldorado Valley course, then scored two birdies and two doubles on a 3-over 39 on the back nine, played on the Coyote Run course.

The other Trojans were bunched together tightly in the standings. Ian Kingsley was the only Pahrump Valley golfer to have similar rounds, shooting 94 and 95 for a 189 good for 13th place, with Caleb Sproul, Trevyn Wombaker and Kasen Moore right behind him. Sproul (90-102-192) and Moore (91-105-196) were much better at Boulder City, while Wombaker (101-92-193) was stronger at Boulder Creek.

The Trojans move on to the Class 3A State Championships, which this year will be played at Genoa Lakes Golf Club in Genoa. Rounds will begin at 11 a.m. Monday and Tuesday.