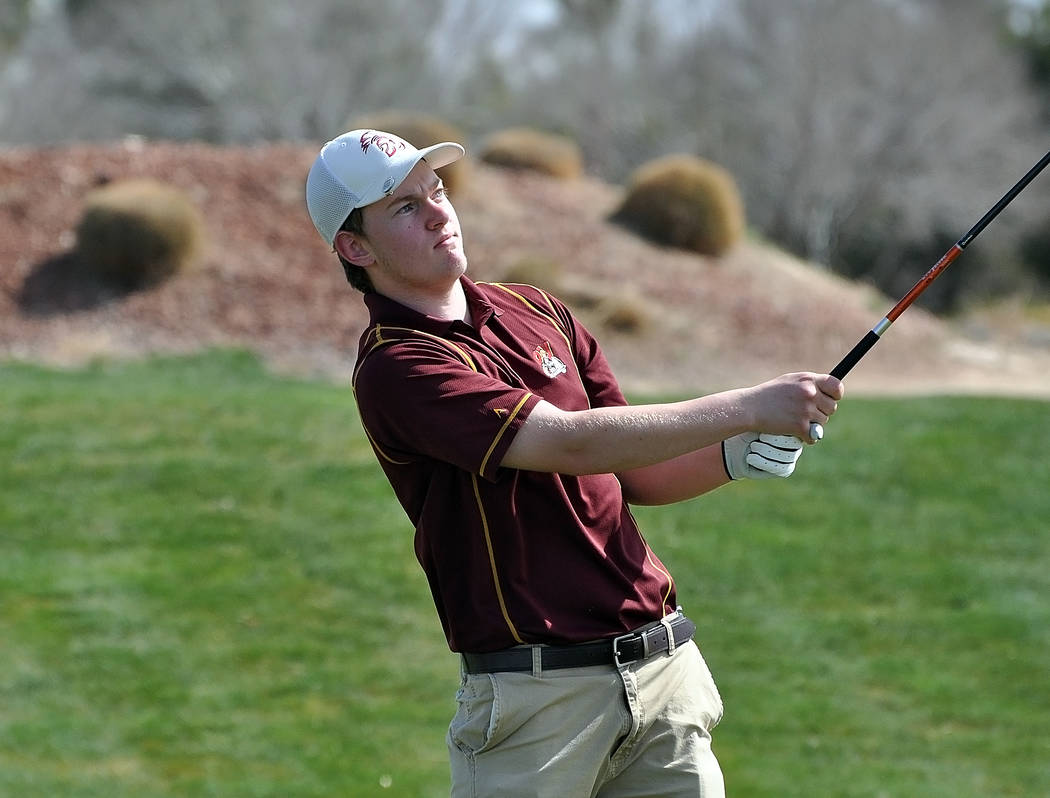 Pahrump Valley sophomore Koby Lindberg shot 24-over 168 to finish seventh in the Class 3A Southern Region boys golf tournament on Monday and Tuesday in Boulder City.

Mike McDougall’s 173 was good for 10th place in the tournament, which was won by Boulder City’s Blake Schaper, who shot even-par 72 both days. All six Boulder City golfers finished in the top 11 as the defending-champion Eagles easily won the team title.

Pahrump Valley was the only other team to qualify. The Trojans’ team total of 705 was 84 strokes behind the Eagles, but both advance to the Class 3A state championship May 14-15 at Mountain Falls in Pahrump.

Lindberg was the only Pahrump Valley golfer to post birdies in both rounds, turning the trick on Nos. 13 and 18 on Monday at Boulder City Municipal and on Nos. 1 and 13 on Tuesday at Boulder Creek Golf Club.

Other Trojans who will be on the familiar fairways of Mountain Falls when the state tournament begins Monday: Craig Moore (12th, 177), Trevyn Wombaker (14th, 187), Kasey Dilger (16th, 191) and Ian Kingsley (17th, 200). Moore had two birdies in the first round Monday as he shot a 10-over 82, matching Lindberg’s opening round.

Lindberg, McDougall and Moore have experience playing the state championship.

Last year at Spring Creek, McDougall finished in a tie for 22nd, Moore finished 28th and Lindberg tied for 31st as the Trojans placed fifth in the state.

Playing on what is effectively a home course could benefit the Trojans this time around. They struggled in the season-opening Pahrump Valley Invitational without their full lineup. Lindberg’s 36-hole total of 184 paced the Trojans.

But they were much better a week later in a Sunset League match on the same course. Pahrump Valley shot 74 over as a team, led by McDougall’s round of 88.

Tee time at Mountain Falls for the Class 3A state championship will be 10 a.m. Monday and Tuesday.