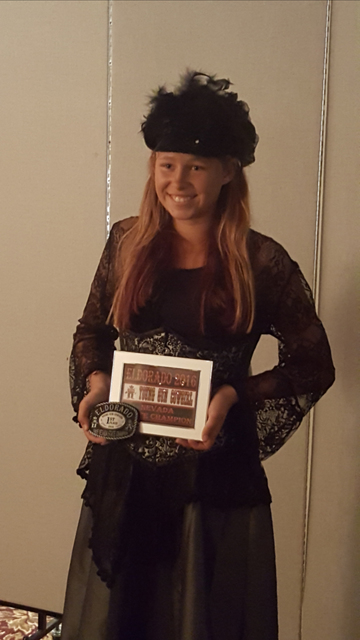 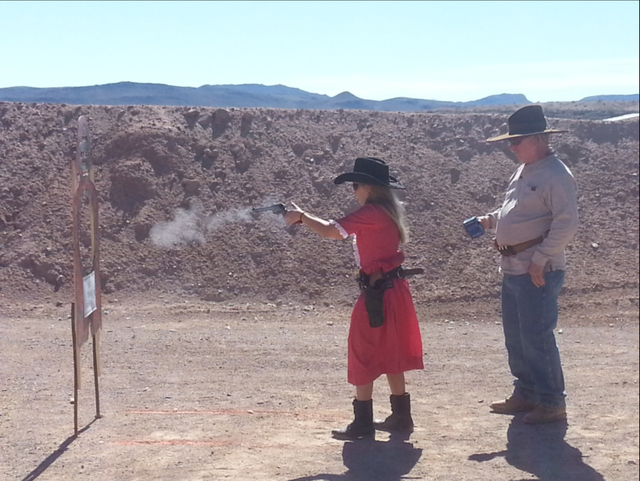 Concentration and accuracy are key to becoming the best in the state. Dakota Gray, whose competition nickname is Kota Khaos, displays both during the Cowboy Action Shooting competition in Boulder City last month. She was named the 2016 Nevada State Champion, one of close to a dozen awards she’s acquired over the years Special to Pahrump Valley Times

It would be safe to call Pahrump Valley High sophomore Dakota Gray a real straight shooter.

Roughly four years ago, Gray became a member of the Single Action Shooting Society, described as an international organization created to preserve and promote the sport of Cowboy Action Shooting.

The firearms used are also based on the era.

Gray whose nickname in the competition is Kota Khaos, humbly described her feelings after earning the accolade.

“As far as a competition, I feel I did pretty well,” she said. “I got first place and I’ve been shooting for about four and a half years.”

Gray said her devotion to the sport came after she and her family were introduced to the world of double action shooting.

Her arsenal includes pistols, rifles and a 12-gauge shotgun.

“We as a family learned how to shoot defensively,” she recalled. “A friend told us about double action shooting and we just kind of stuck with it from there.”

“When our other kids were younger, we didn’t get into firearms all that much,” he said. “Dakota took to it quite naturally and she’s also had some really good coaches. A lot of people don’t know there are some top Cowboy Action Shooters right here in Pahrump who trained her as well.”

Gray also pointed out that the Cowboy Action Shooters should not be confused with another band of local gunslingers.

“The Cowboy Action Shooters are not to be mistaken with the Pahrump Gunfighters,” he cautioned. “We actually shoot live rounds. Dakota shoots .38-caliber pistols and revolvers, rifles and a 12-gauge shotgun. They use regular lead bullets.”

During the recent match, competitors are timed and judged on shooting the targets in a particular order, in addition to accuracy.

Failure to do so racks up penalties.

Gray said his daughter’s accomplishments over the years have generated much attention from afar.

“She has done well enough to open some eyes because she has a pair of custom pistols like no others in the world,” he said. “It was my daughter and the manufacturer from Italy who sat down and designed them.”

The pistols, known as Piettas are similar in design to the guns used in the American West.

“They are from Italy, but they are the closest you are going to get to an original 1860 Colt pistol. She has also been on Shooting USA Sports Television.”

Since her membership with the Single Action Shooting Society, Gray has earned nearly two dozen awards from competitions in California, Arizona, New Mexico and her home state.

The organization is comprised of more than 100,000 members worldwide, as Gray has completed with members from Europe, Canada and New Zealand.

Her father noted the experience has been quite rewarding.

“We enjoy shooting as a family and we are exceptionally proud of her and she seems to really enjoy what she is doing,” he said. “She has made a lot of friends and we actually have friends throughout the world that we stay in contact with. We would never have met them had we not gone into this.”

As for her future, Gray said she’s still uncertain on what path to follow in the years ahead.

“This is my second year in the JROTC program and I enjoy it,” she said. “I’m not sure if I’m going to join the military after I graduate. As far as beginning my career, I would like to be a junior instructor at the Front Sight Firearms Training Institute.”