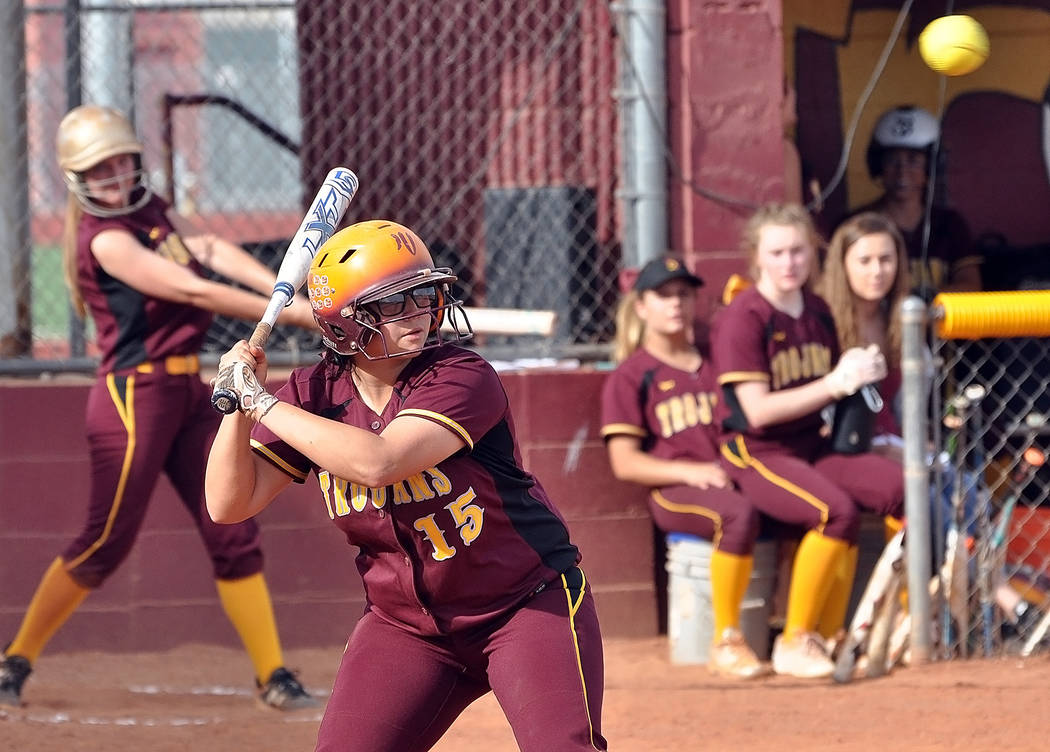 Horace Langford Jr./Pahrump Valley Times Taylor Egan keeps her eye on the ball during Pahrump Valley's 14-0 win over Mojave on April 9 in Pahrump. 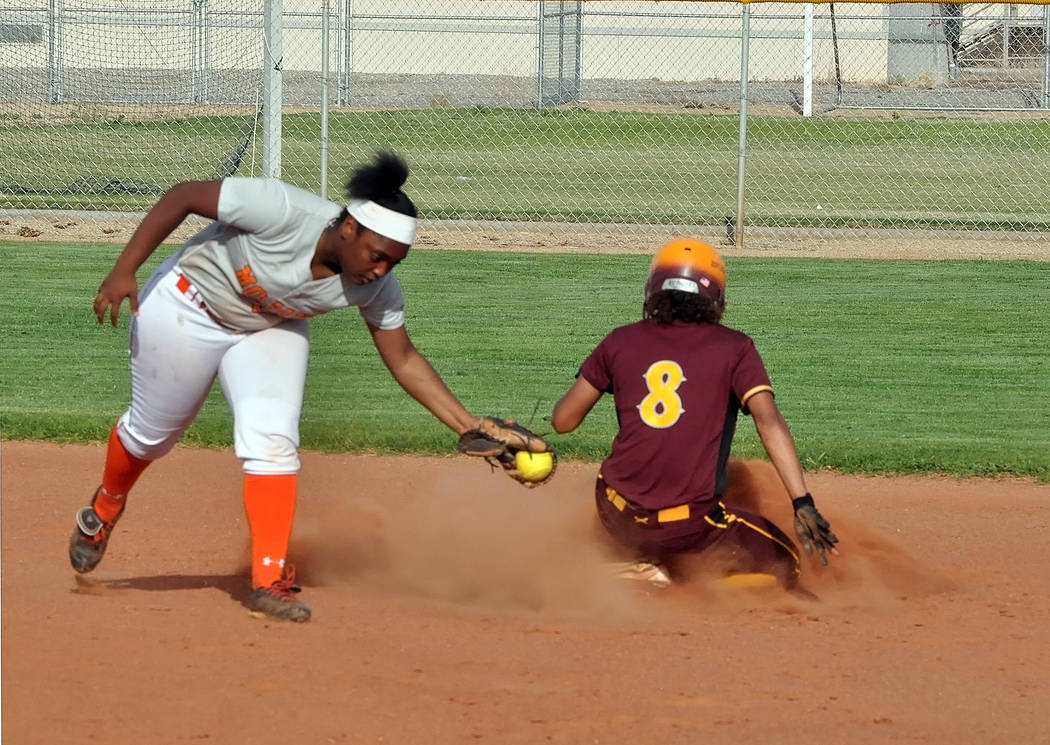 Horace Langford Jr./Pahrump Valley Times Pahrump Valley's Ashleigh Murphy slides safely into second base ahead of the tag during an April 9 home game against Mojave.

With six mercy-rule wins in six games in Class 3A Sunset League play, Pahrump Valley’s softball team had to go looking for some better competition, even if it meant more bus trips.

The Trojans played the second of four Class 4A teams on their late-season schedule Tuesday and came back from Las Vegas with a 4-3 win over Bonanza.

“They have a really good pitcher,” Pahrump Valley coach Eli Armendariz said of the Bengals. “It was good to see some excellent pitching. We hung in there and scored four runs on six hits. It was a well-played game. We got fortunate at the very end there and scored two.”

Taylor Egan sparked the two-run rally in the top of the sixth by ripping a double, then hustling to third base on the throw. The Trojans again used multiple pitchers, with Amaya Mendoza working the first three, Egan the next three and Allyson Ryly coming in for the save. The freshman set down the Bengals in order to wrap up the win as the Trojans improved to 18-7.

Armendariz said his players look forward to playing different teams, and they don’t mind the step up in competition.

“They want to see how well they do against teams like that, like Bonanza today,” he said. “They were very intense and were sharp the whole seven innings. They stayed focused the entire game.”

The Trojans are not done facing teams from the 4A Southwest League. On May 2 they will play at first-place Sierra Vista (20-7), and they close the regular season May 4 with a game at third-place Durango (20-8-1).

“Sierra Vista is having a great year,” Armendariz said. “That will be a challenge. We actually looked to play competitive teams for non-league games because we know our league is weak. And sometimes it’s difficult to get teams to play us. And they all say, ‘Sure, if you’ll come to us’.”

All four non-league games down the stretch are in Las Vegas. In the first one, the Trojans crushed Legacy of the Northwest League, 17-3. Bonanza was a tougher nut to crack, as the Bengals and Trojans were tied 2-2 going into the sixth inning.

“It’s kind of nice to have a game like today,” Armendariz said. “Bonanza doesn’t have a great record (4-17), but they’re a good team in a tough league. They’re in that same league with Sierra Vista, Durango and Bishop Gorman.”

The coach said his team has been very aggressive against the weaker competition, and the lopsided scores have enabled him to use his bench.

“I want to try and play everybody that I can,” he said. “Our outfield is continuing to play very well, our infield has been solid lately, and Amaya is a very good first baseman when she’s not pitching.

“We’re getting timely hitting. We’re getting somebody on with two outs, and then we start rolling. We wait until the pressure is on. Hopefully, we don’t do that during the playoffs.”

Although they are overwhelming favorites to repeat as Sunset champions, and they already have beaten everyone in the league at least once, the Trojans still have to take care of business. But challenges are few in the Sunset. Pahrump Valley has averaged more than 18 runs per game in the league, and the only team to reach double digits against them was Cheyenne, which scored 12. But the Trojans put up 23 on the Desert Shields.

“We just unloaded on them in one inning, and that was it,” Armendariz said.

The top four teams in the Sunrise and Sunset leagues will advance to the Class 3A Southern Region Tournament beginning May 8.